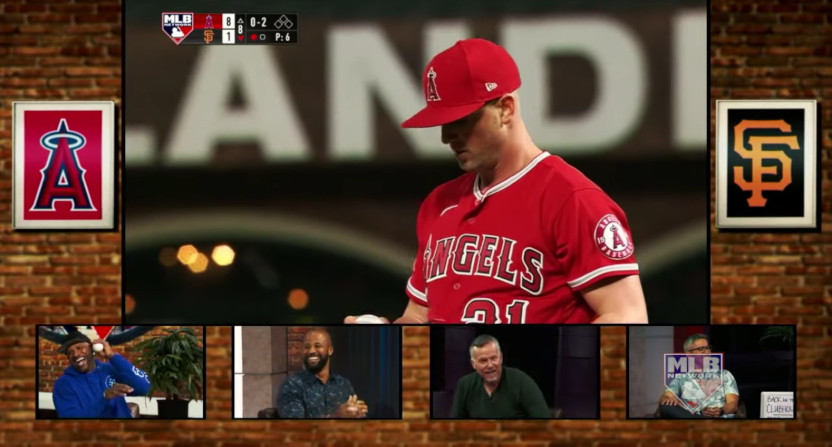 This week has MLB Network doing a couple of interesting things with their game telecasts. On Thursday night, their national broadcast of the Los Angeles Dodgers at the San Diego Padres (9 p.m. ET) will be the fourth and final MLB Network Showcase: Clubhouse Edition for this year, featuring host Stephen Nelson and analysts/former players CC Sabathia, Pedro Martinez, and Chris Young.  The “more conversational” Clubhouse Edition concept debuted this April and continued with games in June (shown above) and earlier this month. Here are some highlights from Clubhouse Edition this year:

And here’s what Sabathia said about it to Rustin Dodd of The Athletic in June:

That was my idea, and that’s been my idea for a long time. Actually, I was on vacation with my PR guy Ron Berkowitz and we came up with that. I was like, man, I want to just call a game, but I want to be like sitting on my couch and hanging out with my boys watching the game. I think fans would like that. Telling stories. And not like: “Here’s the 2-1 pitch.” You get tired of the same traditional fucking broadcast. Let’s mix this up and have some fun.

I actually thought about it when I saw the NFL do the Nickelodeon broadcast. They had the alternate broadcast on Nickelodeon. That shit is fun. If baseball did that, and got into different graphics and had younger players and guys talking, I think it’d be a lot of fun. And MLB Network was all for it. The first two we did were really good. They’ve been a lot of fun, and we’ve got our next one coming up on August 10th. Hopefully we just keep going.

Meanwhile, Friday’s MLBN broadcast of the Chicago Cubs at the Chicago White Sox (8 p.m. ET) will be called by Melanie Newman (play-by-play), Elise Menaker (analyst) and Alanna Rizzo (reporter). Newman and Rizzo made history last month (with analyst Sarah Langs) by becoming the first all-female team to call a game, the Baltimore Orioles-Tampa Bay Rays YouTube game. That game, like all the YouTube broadcasts, was produced by MLB Network, so there’s some crew carryover as well. And it’s interesting to see another MLBN-produced all-female broadcasting team game this quickly. Here’s what the broadcast team from last month’s game (plus Heidi Watney and Lauren Gardner, who hosted the pre- and post-game shows for that game) said about it on NBC’s Today:

We’re catching up with the five women who made Major League Baseball history last night as the first all-female crew to call a game. ⚾ pic.twitter.com/o4dMzSeyFG

Rizzo recently tweeted about her excitement for this one.

See you soon, Chicago. Very excited to team up again with @MelanieLynneN and really looking forward to working with @EliseMenaker. https://t.co/bTrwYA2qfh

It’s interesting to see MLBN continuing with unusual commentary approaches like Clubhouse Edition, and to see them continue to support the idea of an all-women commentary team. We’ll see how these games go for them.