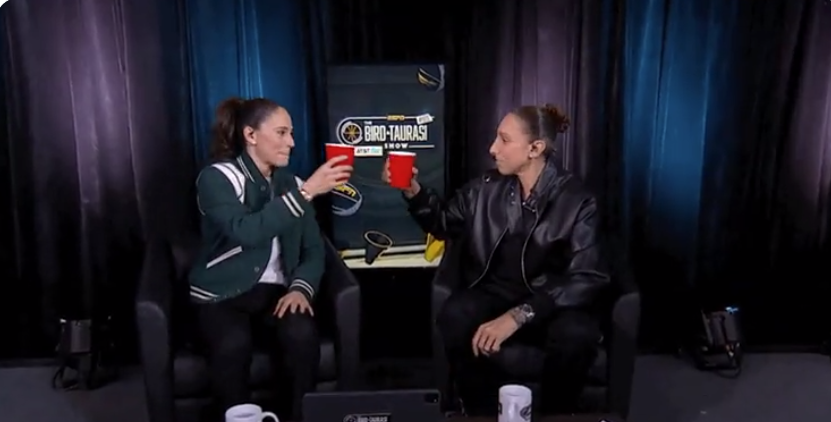 Whenever any network does an alternative “MegaCast” (increasingly becoming more common), I usually have the same routine where I flip to the alternative channel and watch for about twenty minutes to give it a fair sample size of viewing. Five times out of six, I flip back to the normal broadcast, mildly impressed but not overwhelmed with the alternative.

It’s usually just an option, and while I appreciate having the option and will sample it to see if anything interesting is going on, it’s a side item and not the entree for my viewing experience. If a game is worth my time to actually watch, then I’d usually just prefer to watch a broadcast more focused on the action versus casually watching the game in question. The MegaCast is usually just a way to take a bite of someone else’s food just to make sure you are happy with what you ordered.

But on Friday and then again on Sunday, Sue Bird and Diana Taurasi absolutely blew past the Manning brothers’ ceiling I had in my mind of how good a MegaCast could be. As much as I hold Ryan Ruocco, Rebecca Lobo, Andraya Carter, and Holly Rowe in high regard, I almost exclusively hunkered down watching The Bird & Taurasi Show on both nights.

In between having on LeBron James and Doris Burke, they setup this interview with a Geno Auriemma which was basically an Auriemma soundboard that kept saying “100%”. pic.twitter.com/JkiwOF3g3q

Lubricated with whatever was in their red Solo cups, the entertaining banter and storytelling seemed like old hat for the pair. Bird was incredibly engaging and smooth serving in the host role with Taurasi bringing much more of a renegade comedian/storyteller/troublemaker energy. Throughout both nights, the guests were top-tier with Bill Walton, LeBron James, Steph Curry, Breanna Stewart, Megan Rapinoe, and Doris Burke to name a few, with viral moments seemingly popping up every few possessions.

One of the many risks of having Bill Walton on as a guest on a Megacast is he just may start a random story after the buzzer for halftime has gone off and you desperately need to cut to commercial. pic.twitter.com/a7hZG2bZLo

Perhaps a little light on basketball analysis for some, the storytelling and humor were consistently present for those who want something a bit more colorful than just basketball. It was simply fun to watch and many viewers were left with the same takeaway. The Bird & Taurasi Show was a smash hit for ESPN and a feather in the cap for those advocating increased coverage and investment in coverage of women’s sports.

Obviously, ESPN will want the pair to return next year. But given just how profoundly successful this went, it’s highly likely ESPN, Bird and Taurasi’s agents, and other sports media companies are starting the process of figuring out the best long-term vehicles or platforms the pair can launch in the future. You’d have to think that might be coming sooner than later.

Both Bird and Taurasi are still highly productive players at the ages of 41 and 39, respectively. That’s a long way of saying that they’re probably like many iconic athletes 15-20 years into their professional career. They are at a stage in their career where a great media opportunity could play a role in how much longer they play. That’s why it’s likely that, behind the scenes, you’re already seeing some movement from ESPN and other media companies who will assertively try to woo the pair into a substantial long-term relationship. People simply want more of The Bird & Taurasi Show.

I would listen to Sue Bird/Megan Rapinoe/Diana Taurasi commentate on just about anything on TV. Basketball, soccer, tennis, chess, Disney reruns, Top Chef, political debates, mass on the Catholic channel, I'll take it.

ESPN has the benefit of a) being ESPN and b) having successfully developed and executed this weekend’s MegaCast. But whether it’s a weekly TV show, a podcast, or whatever else might be of interest to the duo, I think it’s safe to say that Bird & Taurasi will warrant interest from other media companies, as a team or even individually. It’s not hard to see the likes of HBO, The Ringer/Spotify, Meadowlark Media, Blue Wire, DraftKings, and FanDuel all doing some level of courting to see if they can be a fit for the pair and their future media ambitions.

“Everybody knows, LeBron likes tacos on Tuesday, everybody knows the dope kicks LeBron is wearing, cause it gets covered…I would love for women in terms of the media coverage, to get that same type of coverage.” – Sue Bird https://t.co/6HfaVwmLOK pic.twitter.com/YY86aJfqgF

Given how rare you see something new in sports media receive the reception and social media splash that The Bird & Taurasi Show achieved this past weekend (something unfortunately nearly non-existent in the realm of women’s sports), there is a very real opportunity for the pair to make an even bigger splash if and when media becomes their full-time pursuit. It will be interesting to see what shakes out going forward but for now, it was nice to see a glimpse of what a fun and ambitious media future could look like for ESPN, Bird, Taurasi, and coverage of women’s sports in general.