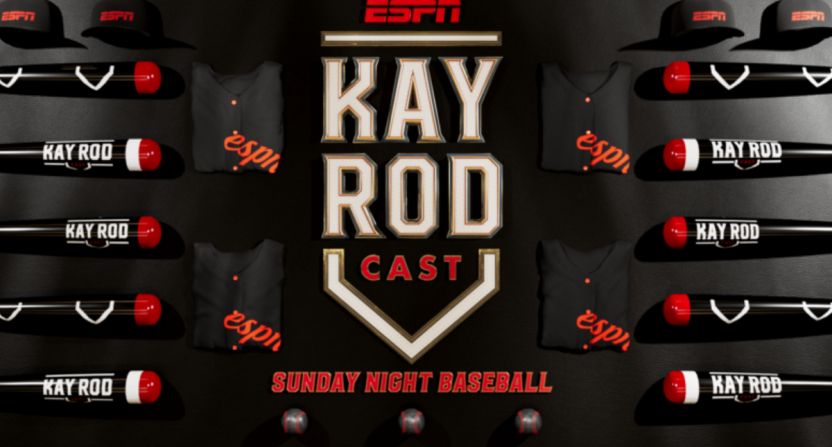 Viewers got their second crack at ESPN’s new KayRod Cast this weekend, and they didn’t seem as interested this time around.

Relative to the first weekend, the viewership shrunk both overall and compared to the main Sunday Night Baseball feed.

Braves-Padres averaged a 0.6 rating and 1.21 million viewers on ESPN’s Sunday Night Baseball over the weekend, including an audience of 100,000 for the second edition of the Alex Rodriguez-Michael Kay “KayRod” alternate presentation on ESPN2. At eight percent of the total audience, the “KayRod” presentation made up slightly less of the audience than it did the previous week (11%).

Compared to the previous week’s Red Sox-Yankees game, the main broadcast declined 50% (from 2.21M) and “KayRod” declined 62% (from 264K). Versus the same weekend last year, the combined audience declined at least 21% from Braves-Cubs (1.54M, pending revision).

Plenty of the usual ratings and audience caveats apply here, of course. For one thing, naturally the second weekend is going to be less of a draw overall than opening weekend, especially after a long lockout offseason. The Braves and Padres game featured a less traditionally sexy matchup than Red Sox-Yankees, even with the Braves being the defending champions. And for a broadcast featuring Michael Kay and Alex Rodriguez, the impact of a Yankees game vs. the rest of the league is always going to be apparent.

Plus it’s only two weeks! That’s a very small sample. All of this could change, and the next announced broadcast on May 1st features the Mets and Phillies, tapping back into the New York market.

Having said all of that, with two editions on the air, there’s a big outstanding question: who is this for?

It’s fair to say the KayRod Cast only exists due to the success of the ManningCast. But watching just one week of Peyton and Eli breaking down Monday Night Football was enough to know it would find a sustainable audience. The same can’t be said for the baseball spinoff.

There have been a few fun moments. It’s not bad television. It’s just kind of there. Even the self-deprecating segments like reading and reacting to mean tweets (in a bit lifted from Disney corporate cousin Jimmy Kimmel) weren’t exactly the kind of thing that people would come back for.

The real key to the ManningCast wasn’t just the idea of a loose, informative, and occasionally irreverent alternate feed to a national game. It was getting Peyton and Eli Manning on television, hosting that loose, occasionally irreverent feed. ESPN was obviously going to try and recreate it in other areas, but the Manning dynamic isn’t an easy one to capture. There might be a way to find a baseball version that comes close, but even ignoring the early returns, A-Rod and Michael Kay don’t feel likely to do it.

For one thing, while Rodriguez is clearly famous and clearly a legendary player, he’s also been on television for years already. There’s no novelty in seeing him breaking down the action on Sunday night for ESPN. Finally getting Peyton onto television was a huge coup for ESPN, and there’s a reason for that: it hadn’t been done. Audiences have already seen Rodriguez in an analyst role, and he’d never exactly been a favorite of many. He’s also just not capable of being as comfortable on-camera as either Manning brother. He doesn’t have that gear. That’s a high bar, for sure, but there aren’t many low bars in primetime television.

Michael Kay, meanwhile, is certainly a very experienced and talented broadcaster, with both talk radio and play-by-play experience, but even watching that mean Tweets clip you can see some of the issues. He shouldn’t be calling the game at all, in a traditional sense. If people want to see that, they’d watch the main feed, featuring the revamped (and well-received) booth of Karl Ravech, David Cone, and Eduardo Perez.

.@davidortiz joined the KayRod Cast to talk about the toughest pitchers he faced in MLB. pic.twitter.com/unKR1u2a5V

And outside of the New York market, Kay is a questionable draw, at best. That’s not a knock on him at all; he’s spent his entire career building up a brand-name in the biggest media market in the country. But putting him on a national broadcast in this format feels a bit optimistic.

Ratings will likely fluctuate throughout the season, depending on matchup and other factors. It’s smart to not do this weekly, too, which is something else borrowed from the ManningCast. Maybe things get a bit more relaxed and the duo can find a more consistent dynamic and begin to draw a steadier percentage of the Sunday night audience. But as of now, it’s just kind of there. “Just being on TV” isn’t a good enough reason to watch something.

Hopefully they can find a few better ones going forward.