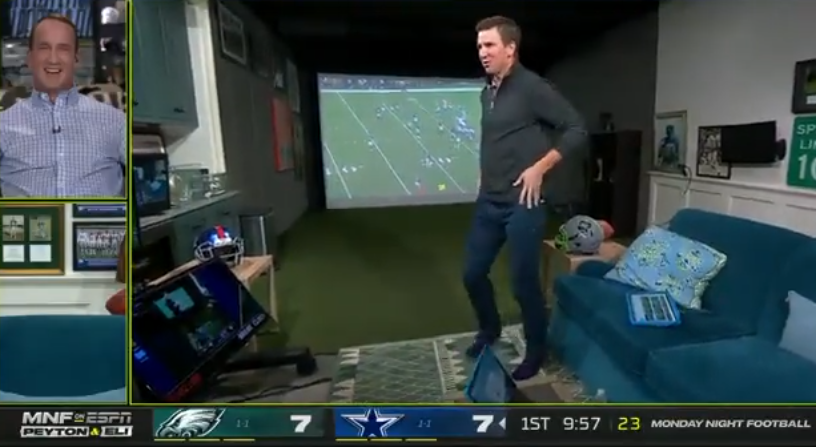 Peyton Manning had been the white whale for television networks for years now.

He’s made a few cameo appearances in the booth since his retirement, always displaying poise and insight. His Q-rating remains astronomical, thanks to his decades of omnipresence across NFL programming (games, commercials, etc.) It was pretty much a sure thing that Peyton would be a draw, while also being comfortable and insightful on camera.

Eli, though, was never really coveted at that level, at least not publicly. His perception throughout his playing career was that of, well, a doofus. (Also, for me anyway, thinking about Eli’s retirement is very illustrative of how time has had no meaning the last few years. I would have probably said he’d been out of football for three or four years now, when he retired after the 2019-20 season. I wonder what happened right after he retired in January 2020 that’s made it feel so long ago now!)

It was almost certainly never a fair perception, but looking at how the ManningCast played out this year for ESPN, it’s hard to think of anyone involved whose stock received a bigger boost than Eli, who was almost an afterthought when this venture was announced. Throughout the year, though, Eli proved time and again that he’s very much not just Peyton-lite, or whatever detractors may have said. Granted, it wasn’t always positive; the very first broadcast featured the classic double-bird to the camera, which remains an incredible moment of television.

As funny as that was, it sort of set the tone for the whole year of broadcasts. Not in terms of swearing or obscene gestures (though there was a bit of that throughout the year, too), but for Eli being a catalyst to the entertainment side of the show. He’s obviously able to break down the action from a technical standpoint like Peyton does, but he brings an entirely different energy to proceedings.

He’s also much better at needling Peyton, too. Things like mocking a shirt Peyton sweated through felt very natural, more like a seasoned late night host than some sort of forced comedy attempt. Even things like attempting to show off his hip flexibility worked, somehow, thanks to Eli nailing the right mix of self-deprecation and willingness to look ridiculous.

Even with the celebrity guests, where Eli was usually tasked with off-topic segues, he handled things well. Interviewing, especially on live television, is very much not an easy job, much less when you and your co-host and your guest are all in separate locations. Oh, and everyone is also watching a football game at the same time, too. Eli asking The Rock about his T. Rex skull Monday night after the Internet lit up with questions was a great example.

Considering the rest of The Rock’s appearance served more as a long-form liquor, XFL, and Disney film franchise commercial, that was a welcome moment and one that Eli clearly had not planned for in advance. He even managed to deftly handle moments like Peyton losing his audio (and swearing about it, a nice bookend to the season):

A big strength of this format is just how laid-back Peyton and Eli are on the air. Having watched them work throughout the year, it’s apparent how bad an idea it was originally to try and force a third person into the mix (especially when that person may have been Adam Schefter); you can see how after rehearsals they just decided to roll with Peyton and Eli only, one of the best sports media choices of the year.

Peyton and Eli Manning have both been in front of cameras in big moments for pretty much their entire adult lives, and it’s that relaxed vibe (I hesitate to say authentic because it’s not like I know them personally, but it at least looks and feels authentic enough that it doesn’t really make a difference whether it is or not) that makes it all work. Rarely does anything feel forced; the occasional aside from the game to talk about something with a guest that’s wholly unrelated, sure, but if something clearly doesn’t work they’re both unafraid to make fun of it not working.

But again, none of this works without Eli. Sure, Peyton and rotating guests would have been watchable, but it wouldn’t have had the same level of impact. Now, though, given how just plain likable Eli was all season, it’s not even impossible to imagine the alternate cast continuing even if Peyton is forced to step aside (say, if he takes a role in Broncos ownership.)

That would have felt unthinkable at the start of the year, but Eli was just that good.