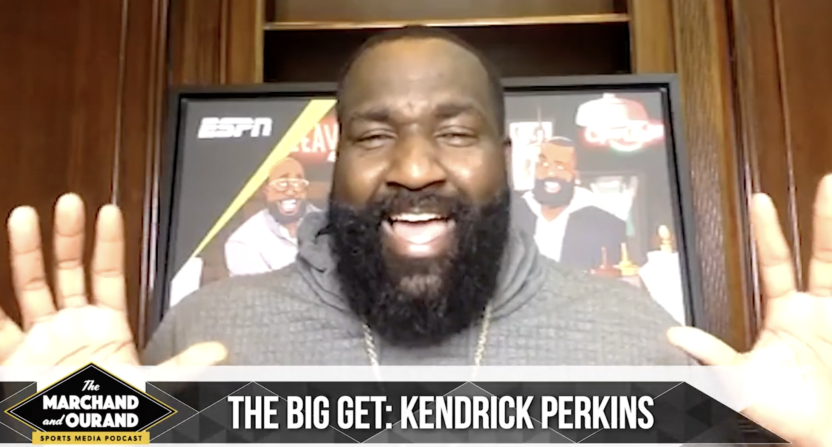 When Stephen A. Smith, Skip Bayless, and Colin Cowherd let loose with a hot take about the biggest names in pro sports, they are mostly doing so from a safe distance. While the athlete you torched can come for you on Twitter or call you out at a press conference, we can assume that most of the time, there’s little chance of immediate personal interaction.

That’s not the case for Kendrick Perkins. Before entering the sports media world and becoming a fixture on ESPN, Perk spent 14 seasons in the NBA, spending much of that time playing alongside some of the biggest names in the sport, including Kevin Durant and Russell Westbrook.

So when Perkins lets loose a hot take about a current NBA star during one of his appearances on ESPN’s NBA programming and debate shows, there’s a better-than-average chance that he’s going to hear about it and have to deal with the fallout.

Kendrick discussed as much during his appearance on this week’s “Marchand and Ourand” sports media podcast.

In regards to Westbrook, Perkins said that a comment he made about his former teammate on First Take this season led to a breakdown in their friendship that has yet to be healed.

CLIP: Russell Westbrook is currently not talking to Kendrick Perkins after Westbrook and his wife were upset about Perkins saying the Lakers should trade Westbrook.

“I’m actually working on getting my relationship back with one of my brothers, who was very, very upset, in Russell Westbrook,” Perkins said. “You know, I defended Russell Westbrook for years. And, this year, he struggled. It was a topic that came up on ‘First Take’. They asked me, out of the big three on the Lakers [LeBron James, Anthony Davis, and Westbrook], which one would you trade?

Perkins said that he had to be “real” when answering the question and said the answer is Westbrook.

“I don’t make up the topics,” Perkins said. “That’s the first thing that people have to realize. I get the topics and then I go and announce the way that I feel. I said it, and it hurt me. I’m actually working on getting this relationship back.”

Westbrook’s wife Nina ended up texting Perkins’ wife Vanity, something that Kendrick tried to smooth over, but was unable to.

“His wife actually reached out to my wife,” Perkins said. “And with a long text message. It was like, ‘Hey, it hurts me that Kendrick said that Russ needs to be traded. We finally got him back home.’

“It messed me up. Like, damn, I felt bad. I reached back out to her and sent her a long, heartfelt message. I said, ‘Nina, one thing about it, I would never disrespect your family. We’re talking about the game of basketball. I’m one of Russell Westbrook’s biggest supporters.’ She never responded back to me, and I figured she was really upset.”

Russell and Nina publicly called out various critics over the course of the Lakers’ season, including Skip Bayless.

If you are a public figure, you have to be responsible for the type of example you set. Unfortunately, you must keep in mind the consequences of your behavior.

Perkins also heard from Durant after he made some comments about the Brooklyn Nets star this season. He also knows that if he says anything else about KD in the future, he’s gonna hear about it ASAP.

CLIP: Kendrick Perkins on Kevin Durant just cussing him out over text after Perkins said Durant got "punked" against the Celtics.

“Our friendship is so there, our brotherhood is there,” said Perkins. “But I already know that if I say something, like, for example, this past series with the Celtics. Game 1. I went on First Take and I was like, ‘KD got punked.’ As I’m doing the show, at the commercial break, I look down at my cell phone and I just see KD writing a text message. So I’m like oh here we go. So I open the text message and it’s just a bunch of cuss words. He’s reading me my rights. M-Fer this, M-Fer that. But you right though. You spot on.”

Weird, that doesn’t sound like the thick-skinned Kevin Durant we know…

Whatever you think of Perkins and his opinions, there’s something to be said for the fact that, unlike so many of his counterparts, he has to be personally accountable for his takes to the people he’s making them about. It makes a difference when you consider the way many of his fellow hot-takers are a step removed when they fire off their rounds (even though Durant will let you know what he thinks, one way or another).

So far, no word on whether or not Ben Simmons has reached out to Perkins.