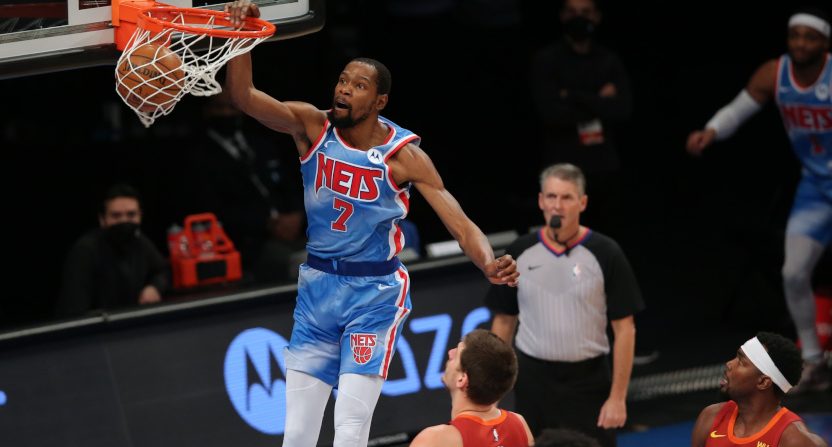 With the Brooklyn Nets eliminated by the Milwaukee Bucks in overtime Saturday and the Philadelphia 76ers knocked out by the Atlanta Hawks Sunday, that’s left the NBA with a final four of Milwaukee, Atlanta, the Phoenix Suns, and the Los Angeles Clippers, and that’s led to some takes. Contrary to what some Twitter pundits claim, these are not small markets (those markets are 35th, 10th, 11th, and second in the latest Nielsen designated market area (DMA) rankings), but this list does include some teams that we haven’t recently seen this deep in the playoffs.

The Bucks lost in the conference finals in 2018-19, the Hawks lost in that round in 2014-15, and none of these teams has made the NBA Finals since the Suns in 1993 (a loss to the Chicago Bulls). So that’s led to some punditry. And while some are celebrating seeing different teams get this far, others are calling this a “nightmare” and complaining about what they see as a lack of “crossover stars,” including writer Touré. But his tweet led to quite a dunk from an unexpected source; the Nets’ Kevin Durant (seen above dunking against Nikola Jokic in a Jan. 12 game).

It’s certainly notable to see Durant (who’s been known to mix it up on social media) going at Touré here,  and it’s interesting that he’s doing so in support of teams other than his own. And he has a point with his criticisms. Nobody really knows for sure how these matchups will impact the ratings, so a definitive “This is not good for the league” take feels a little much at this point, especially when it’s based off of such reliable data as “best-selling jerseys.”

At any rate, it seems pretty likely that this isn’t the worst U.S. ratings setup for the NBA in recent years. That would be the 2019 championship run of the Toronto Raptors and their lack of a U.S. DMA, which produced the lowest viewership for early Finals games since 2014 and only avoided overall U.S. disaster by a Finals that went six games. (It obviously did very well in Canada, but that’s not the point here.) All of these remaining teams come with a U.S. market, with the lowest being Milwaukee, and while that certainly isn’t the whole story here (for example, a whole lot of Los Angeles cheers for the Lakers rather than the Clippers), this doesn’t look terrible from a market perspective.

But markets aren’t everything, either. Last year’s pandemic-shifted October Finals drew poorly even with the Lakers and Miami Heat involved, but that was also part of a larger decline across sports. There’s been a bit of a rebound this year, but the playoff numbers so far still aren’t back to pre-pandemic times. And there are still a lot of questions to be asked about where the playoffs and Finals viewership will end up, and no one really knows for sure at this point how this year’s Finals will do, especially before we even know that matchup.

And even ratings aren’t necessarily the be-all and end-all. Some have complained about only a small number of NBA teams mattering recently and argued that more of the league needs to be relevant. Well, this would certainly seem to be a step in that direction. Whether that’s actually “good” or “bad” for the NBA can be debated endlessly (and like everything else around the league, it certainly will be, including on the ESPN and Fox morning debate shows). But there’s no obvious “nightmare for the NBA” here, especially when the only data cited in support of that argument is jersey sales. So there’s a lot more to like about Durant’s dunk than Touré’s original tweet.