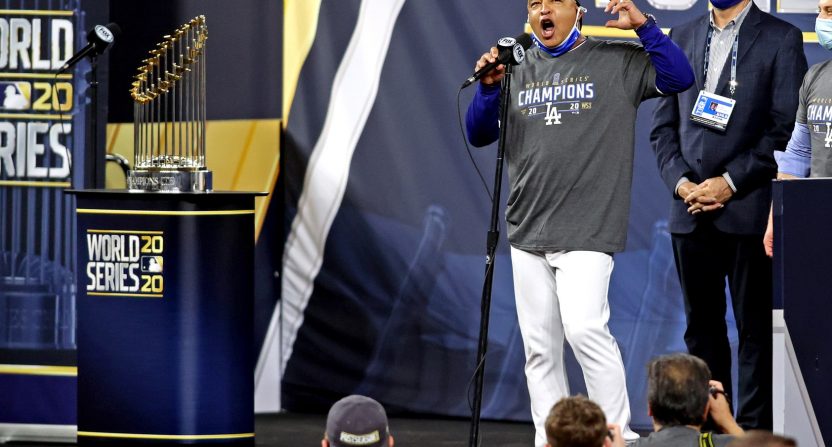 I think that any hope of the World Series not hitting a record low was snuffed out when the series failed to top ten million viewers for any of its first four games. Sure enough, following the conclusion of the series with Tuesday’s Game 6, it’s officially a record-low for the 2020 World Series, along with record lows for each of the six games in the series.

Tuesday’s series finale drew 12.627 million viewers on Fox, the least-watched Game 6 ever by 6% (Game 6 of 2014’s Giants-Royals series drew 13.372 million viewers). Overall, the series finished with an average viewership of just 9.734 million viewers, by far the least watched series ever. The previous record low came for 2012’s Giants-Tigers series, which drew 12.636 million viewers. This series marks a new record-low by 23%.

Furthermore, the overall series average clocks in at lower than what the previous low for a single game was (Game 3 of 2008’s Phillies-Rays series drew just 9.836 million viewers). That single game record-low was broken by each of the first four games of this year’s Fall Classic.

If there’s good news for baseball, it’s that while this series was a record-low, both the average viewership for the series and the average decline were lower than the record-lows and decline seen by the NBA Finals and the near record-low and decline for the NHL Stanley Cup Final (topping only 2007). The bad news is that this year’s World Series was taking place at its normal time on the sports calendar, didn’t go head to head with any presidential debates, and only went head to head with one NFL game. Paulsen at Sports Media Watch also notes MLB games from October also mark four of the five most watched non-NFL sporting events since the start of the live sports shutdown in March. Last year, the league had just two of the top 15, but it’s worth saying that the most-watched game from this year wouldn’t have cracked the top 15 last year.

And while the fact that the World Series managed to top the NBA Finals this year has been a popular talking point, it should be mentioned (again via Sports Media Watch) that this makes just the third time that has happened since 2007 (2009, Yankees-Phillies, and 2016, Cubs-Indians, which are the two most-watched Fall Classics over the last 15 years).

Now that the season is over, we can turn our focus to 2021. If these ratings woes for MLB, and the other leagues other than the NFL, continue on next year, then we can have a much longer conversation about this striking viewership decline. For now, I’m confident in calling this a one year blip rather than the start of a shocking trend, but I reserve the right to change my mind in a few months.