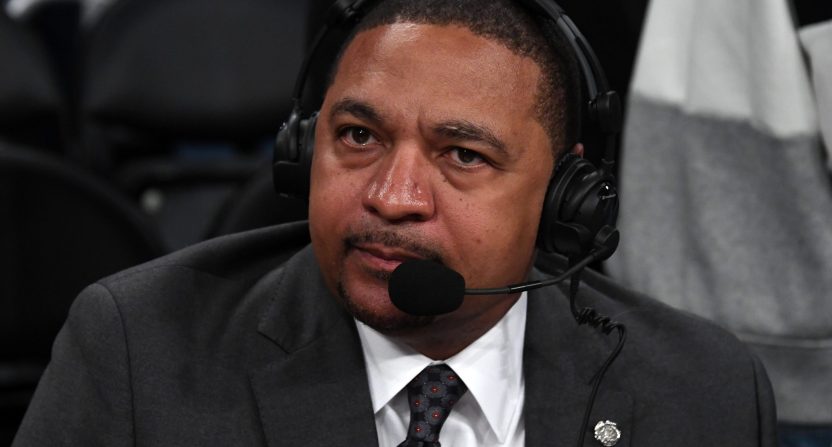 There have been some prominent and controversial allegations over the years of ESPN interference with their news side around reports involving their on-air personalities, from the Craig James-Bruce Feldman saga in 2011 through then-ombudsman Robert Lipsyte’s 2014 exploration of the company’s efforts to stay away from conflict-of-interest criticisms against them through Stephen A. Smith and Magic Johnson criticizing the company’s print reporting on Johnson on ESPN TV shows in 2019. One of the most notable to date comes from Ethan Sherwood Strauss, who wrotein his latest House of Strauss Substack column Tuesday that ESPN The Magazine spiked a story in 2016 (Strauss was working at ESPN at that time, but specifies that this wasn’t his story) on the Golden State Warriors’ success under Steve Kerr because of its “incendiary” comments on previous Warriors’ coach Mark Jackson (who returned to ESPN and ABC as a NBA analyst during the 2014 playoffs following his firing by Golden State, and is seen above working for ESPN in 2019):

There are a lot of important factors to keep in mind here. It’s certainly believable that this piece was spiked over something at least close to this. Strauss was working on NBA content at ESPN at the time (he was laid off in the wide-ranging April 2017 layoffs, then later wound up at The Athletic and then at his own Substack site), so he quite likely would have heard about this (from the unnamed writer or from other ESPN NBA figures). And way back in 2014, shortly after Jackson’s firing, Warriors’ co-owner Joe Lacob said “Part of it was that he couldn’t get along with anybody else in the organization” about Jackson.

And there’s been previous discussion of  Jackson criticizing homosexuality and Welts in particular. That was especially prominent in a 2019 Andre Iguodala interview with syndicated radio show The Breakfast Club. There, Iguodala talked about Jackson inviting the team to church, using Warriors’ facilities to stream his preaching for church services, and also expressing “his views on gender or marriage or what the Bible said about sexuality”:

“One particular issue was, from what I heard, his views on gender or marriage or what the Bible said about sexuality. And our head of our business, he just went in the Hall of Fame, he was the brains behind All-Star Weekend, this dude created All-Star Weekend, Rick Welts, genius at business. He’s celebrated as one of the top execs in sports on the business side. And he’s gay. …So there was conflicts with that that was widespread, everyone was talking about that. And it was interesting, someone mentioned it to me as like ‘People can express themselves, but are you allowed to express yourself if you don’t agree with it?’

The specific discussion of Welts and Collins as “penis grabbers” who were “going to hell” appears to be a notable escalation from anything previously reported about Jackson, as are the claims about him accusing underlings of “being influenced by the devil” and laying hands on them. But those claims certainly are not beyond imagination considering what has been previously reported about Jackson. And, yes, absolutely, there are some things not necessarily factored in here; this isn’t a direct comment from the writer whose story was “spiked,” but rather a relaying of that from someone who heard about it, and it doesn’t include any comment from ESPN on their perspective on why that story was pulled (not that there’s necessarily a defense to this, but they might toss out a “it didn’t meet our standards” or something). But this is still a significant allegation.

And where this gets even more interesting is with the ongoing discussions of Jackson possibly returning to the NBA as a coach. Strauss writes at the start of this piece that that hasn’t happened yet because of what teams have found out about him:

The reasons for Mark Jackson’s drought are hidden, in part, because he’s an announcer. If he ever gets what he wants and leaves that position, we’ll see more on why the object of his pursuit was kept from him. Teams know. They’ve done the work to find out what Jackson’s current employer has tried to keep quiet.

So, with Strauss making those specific allegations public now, it’s going to be fascinating to see how everyone involved responds. Does Jackson issue a denial, or a confirmation but with a “I’ve learned since 2014” apology? Does ESPN weigh in on any of this, either on these alleged comments from Jackson or on their role in “spiking” a 2016 story with critical comments about him because he was working for them? Does the writer of that story come forward with more details? Do NBA teams still consider Jackson for coaching jobs? We’ll have to wait and see, but there’s certainly a lot of potential for this to grow much bigger.