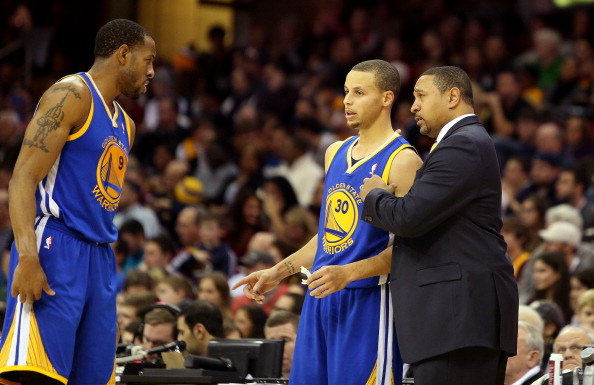 Since Mark Jackson was fired by the Golden State Warriors after a first-round playoff exit in 2014 (they went on to win the NBA title the following year under Steve Kerr, and then win two more titles in the next three years), there hasn’t been a whole lot of noise about him returning to coaching. Later in 2014, Jackson joined his old colleagues at ESPN and ABC to broadcast the Eastern Conference Finals and the NBA Finals, and he proposed signing a multi-year deal with them (which they agreed to) rather than trying to land another coaching job quickly. And he hasn’t gotten too close to a coaching job since then, instead signing a multi-year extension with ESPN in 2017.

But according to an interview Warriors’ forward Andre Iguodala (seen at left in the above December 2013 photo with Steph Curry and Jackson) did with syndicated radio show The Breakfast Club (hosted by DJ Envy, Angela Yee and Charlamagne tha God) Tuesday, Jackson sticking with broadcasting rather than coaching isn’t by choice. And Iguodala thinks that’s not about how Jackson “couldn’t get along with anybody else,” or about how the Warriors went from first-round exit to championship after firing him, or about the many dumb comments he’s made since attacking everyone from Curry to Richard Jefferson to ESPN as a whole. Instead, Iguodala agreed with the hosts’ assertion that Jackson has been “blackballed,” and he cited Jackson’s “conflicts” with openly-gay NBA executive Rick Welts (then with the Warriors) as part of that. Here’s the key part of that interview (the full hour-long interview is here):

DJ Envy asks “What’s happening with Mark Jackson? You played under Mark Jackson for a year, right? Whatever happened to Mark? Because he put that team together, it seems like, and then nobody ever gave him a chance again, which seems weird.” Iguodala responds “Just the politics of it, man.” Charlamagne then asks “When you say politics, what do you mean? I know they used to be upset because he was too religious, they said.” DJ Envy then adds “Did he make y’all go to church? That was a rumor that he made y’all go to church.”

Iguodala responds “Nah, he didn’t make us go to church. He offered it to us and we all went as a team, because we got a team with a bunch of believers, we went to church, but, like, we were going to church regardless. But it was the politics. And you know how it is, once they want you out, they’re going to find something. So he would have church in the facility on Wednesdays sometimes, he would stream church services.” DJ Envy asks “What do you mean in the facility, like, during practice?” and Iguodala responds, “No, no, no, like Wednesday night service. He’d just set up a computer in the facility and he would just preach and his congregation could watch and stream it from home.”

DJ Envy then asks “So if y’all was on the road, he’d just be preaching from wherever he was?” Iguodala responds “I don’t know what he did on the road, but at home, he’d be preaching at like 7 o’clock at night. Nobody was in there. And, you know, one particular issue was, from what I heard, his views on gender or marriage or what the Bible said about sexuality. And our head of our business, he just went in the Hall of Fame, he was the brains behind All-Star Weekend, this dude created All-Star Weekend, Rick Welts, genius at business. He’s celebrated as one of the top execs in sports on the business side. And he’s gay.”

“So there was conflicts with that that was widespread, everyone was talking about that. And it was interesting, someone mentioned it to me as like ‘People can express themselves, but are you allowed to express yourself if you don’t agree with it?’ You should accept it because we should all accept each other, but it’s like we’re afraid to really say our beliefs now. You may not believe in something, but as long as you still embrace that or have respect for them, as long as you don’t disrespect them or judge them.” He then trails off. The clip then jumps forward and Charlamagne asks “Do you think Mark Jackson was blackballed from the NBA?” Iguodala responds “I do, yes.” Charlamagne says “Really?” and Iguodala says “Absolutely.”

There have been some rebuttals to this from those plugged into the NBA. First, from The Athletic’s Ethan Sherwood Strauss:

I don't think Andre is correct here. If the league wanted Mark out of prominent positions due to his views, he wouldn't be on the NBA's biggest broadcast partner, talking to a TV audience of 20 million people https://t.co/RUdC4NGBwp

And from Phil Barber of The Press-Democrat (Santa Rosa, CA), who covers the Warriors:

What’s his “marriage view”? That his was flexible? https://t.co/4WBLUUc6bo

Yes, Mark Jackson saying things like “Not in my locker room” about openly-gay players like Jason Collins (for the record, Jackson did dispute that he said that) and reportedly “felt one way about homosexuality and the execs felt another” is pretty ironic considering his 2012 admission that he was extorted by an ex-stripper after sending her nude photos (while he was married, and while he was a pastor). But beyond that, maybe Jackson hasn’t received more coaching offers not because of anti-gay comments, but because his actual coaching record isn’t all that good. He went 121-109 in three years with Golden State, only making it as far as the second round once, and while he went 51-31 in his final year, that came with a first-round loss. Under Kerr, the Warriors improved to 67-15 with mostly the same roster and won the NBA title. That doesn’t exactly indicate Jackson’s an amazing coach. And beyond that, there’s all the other drama to deal with with him, including Golden State co-owner Joe Lacob’s December 2014 comments on just how disliked Jackson was:

That seems like a problem! And beyond that, Jackson’s brand of grumpy and vindictive on-air commentary since then, such as a 2015 claim that Steph Curry had “hurt the game” of basketball and a 2016 complaint about Richard Jefferson missing free throws, hasn’t exactly sold him as a likable guy or a desirable coaching candidate. Despite that, though, the claims of Jackson actually being “blackballed” feel a bit much considering the attention he has received.

Most recently, Jackson did receive some reported NBA interest last year as a candidate for the New York Knicks’ job. Granted, that was alongside half of the coaching world, (including broadcast partner Jeff Van Gundy), and it didn’t seem to get too far, but there don’t appear to be any reports from that time that Jackson wasn’t being seriously considered because of his “views on marriage.” The Knicks also reportedly interviewed him in the spring of 2016, and he reportedly showed some interest in the Nets’ job that January.

That doesn’t necessarily mean Jackson was likely to get any of those jobs, but again, there are a whole lot of good reasons not to hire him. There’s even an argument that he might be the fourth-best coaching candidate out of the four people on his NBA on ABC game broadcasts, behind Jeff Van Gundy (a career winning percentage of .575 versus Jackson’s .526), Doris Burke (who many regularly argue should replace Jackson as an analyst on the primary team) and maybe even Mike Breen (depending on how you feel about “Bang!” as coaching advice).

Yes, Jackson doesn’t appear to have received a serious offer to be a NBA head coach again, but it’s far from clear that he’s “blackballed” because of some personal campaign against him or because people have issues with his reported comments about gay people (plenty of people definitely do have issues with that, though). It’s possible that he hasn’t been offered head coaching jobs because his head coaching record is only three years of limited success with a very talented Warriors’ team, which instantly got much better without him. It’s possible he hasn’t been offered those jobs because of past reports of how difficult he was to work with and how widely disliked he was. It’s possible he hasn’t been offered those jobs because of how petty and vindictive he’s seemed to be about the Warriors since. And it’s possible that NBA teams just think there are a lot of more promising potential head coaches out there than the 54-year-old Jackson. Iguodala can of course express his view that Jackson was “blackballed” if he wants, but there doesn’t seem to be a ton of evidence to support that at this moment.