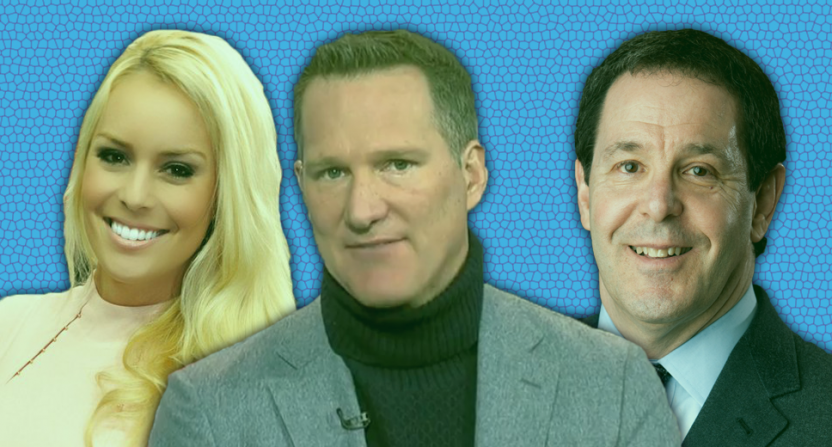 On April 26, 2017, the entire sports media world was rocked by news of about 100 layoffs at ESPN, many of them impacting big-name reporters, columnists, anchors, hosts and analysts.

A year later, those former ESPNers have landed in all sorts of interesting roles, from Food Network to the University of Pennsylvania to, of course, The Athletic. Here are updates on every known victim of ESPN’s April 2017 purge, broken into a few categories.

ESPN’s layoffs turned out to be a great opportunity for The Athletic, which has grown from several cities to several dozen markets in the past year, while launching verticals on college basketball and college football made up largely of ESPN castoffs.

What a difference a year makes. When the bottom dropped out a year ago today, friends told me it would work out. They were right and Im better for the experience. Grateful to family, friends, even coaches who encouraged me. @ChuckCulpepper1, @YahooForde and Alfonso especially

Then: ESPN.com columnist
Now: Columnist for The Athletic

Then: ESPN business analyst
Now: Columnist for The Athletic, The MMQB

Thrilled to announce that I'll be joining The Athletic on May 15th. Here's our special sign up link, stay tuned for more, and happy NBA playoffs to all! https://t.co/uSKOeeFi69 https://t.co/Pg4ByMeF4z

Then: ESPN motorsports commentator
Now: Back on ESPN for 2018 IndyCar season

Then: Play-by-play commentator on various ESPN events, including MLB coverage
Now: Red Sox play-by-play voice on NESN (where he has worked since 2016)

Then: ESPN.com NFL contributor
Now: NFL columnist for USA Today (where he has been since before ESPN layoffs)

Then: ESPN college football analyst
Now: Contributor on 103.7 The Buzz in Central Arkansas

Re-Signed with @1037TheBuzz ESPN Radio. They get it & R the best. Looking forward to CFB season MAKING STATEMENTS THAT OTHERS WON'T. Tune In

MEDIA NEWS: Hearing @Brett_McMurphy will be joining @WatchStadium as a college football insider sometime in the next couple of months. McMurphy did excellent breaking news work for ESPN before he was laid off. Good to see him landing somewhere again.

After his rendition of "Take Me Out To The Ball Game" today, catch @dougglanville TONIGHT on Baseball Night in Chicago with @leilarahimi and Bill Melton!

Then: ESPN college football and motorsports reporter and analyst
Now: Will work Indianapolis 500 for ESPN/ABC

Then: ESPN golf analyst, reporter
Now: Golf analyst for CBS (where she has been since before ESPN layoffs)

Pumped up for some big things ahead…get ready on Monday. #backtothegrind

The members of this group continue to work in media but have left sports behind, at least for now.

Then: SportsCenter correspondent
Now: Host of Get Up DC! on WUSA9

Then: Correspondent on SportsCenter, other ESPN shows
Now: Host and reporter at The Federalist; host of Like it or Not on Fox 5 in Washington D.C.

LIKE IT OR NOT: @BrittMcHenry, @GuyLambertNews and @LokayFOX5 discuss if they like the Browns taking Baker Mayfield with the 1st pick & if they are fans of the Redskins' first round pick. Watch the special NFL Draft edition of #LikeItOrNot here: https://t.co/n2yJHDJ7XS #fox5dc

Other job in sports

These former ESPN contributors have left media, but hung around in sports one way or another.

Then: Investigative reporter, Outside the Lines contributor
Now: Executive director of sports and social program at Aspen Institute

Hear from winning coach, @merrilhoge and @JenHale504 after the final Your Call Football preseason scrimmage.https://t.co/ixoeIKXnJq

Then: Wednesday Night Baseball analyst
Now: Special adviser to Dodgers president Andrew Friedman (a role he has had since 2016)

Job outside sports and media

This group has decided to go an entirely different direction, post-ESPN.

Then: ESPN NBA Draft reporter
Now: Associate professor at BYU-Hawaii (where he has been since 2005)

Then: ESPN.com reporter, columnist; ESPN Radio host
Now: Columbia University adjunct professor (where she has been since before ESPN layoffs); appeared on House Hunters International and will apparently move to England

What the hell have I been doing since ESPN? Find out Tuesday night at 10 p.m. ET when our @HouseHuntersUSA episode debuts! Bonus footage: Will our marriage survive? Will our teen daughters acknowledge us publicly? Find out! pic.twitter.com/zFBnHNWkfV

As best we can tell, these former ESPNers do not currently have work. Some might still be under contract at ESPN, while others have likely chosen not to work for one reason or other. A handful have not given any public indication of what they’re up to at the moment.

Then: Analyst on NFL Live, other shows
Now: Unclear