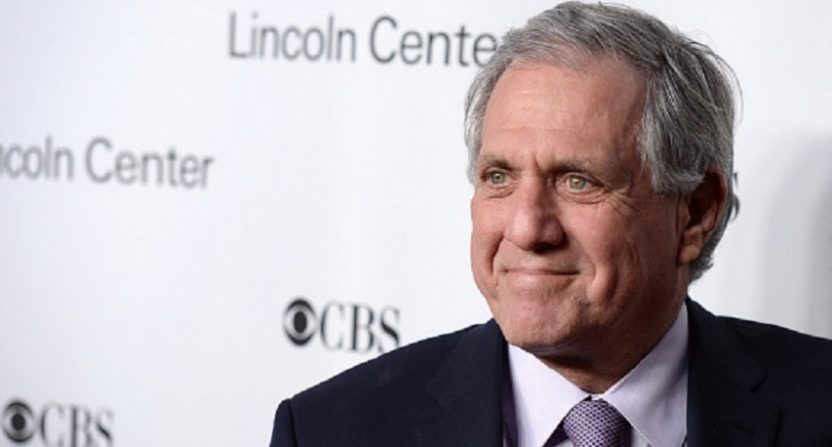 Sexual harassment claims have had a significant impact on the sports media universe in recent years, with people at outlets from NFL Network to ESPN to The Ringer to The Los Angeles Times to WFAN facing allegations and receiving punishments from investigations to suspensions to firings. The latest story along these lines isn’t specifically about a sports figure, but it is about someone whose decisions have major effects on the sports world; CBS chairman and CEO Leslie Moonves.

The New Yorker story in question, from Ronan Farrow (who led the way on reporting of sexual assault and sexual harassment by Harvey Weinstein) wasn’t actually the first public news of this. That piece was published on the web Friday evening, but its impacts were felt before that. The Hollywood Reporter published a piece from Kim Masters Friday morning relaying some of the “allegations of sexual misconduct,” including “instances of unwanted kissing and touching,” that were reportedly in Farrow’s piece. The THR piece spread far and wide, and that led to CBS shares dropping six percent and the company’s independent directors vowing to investigate. But Farrow’s piece has many more details, and his comments on Twitter before its publication are perhaps notable:

A quick reminder that I don’t comment on reporting I haven’t published, and if you’re reading about my work from secondary sources you’re often not getting the full or correct story—especially in cases where parties have an interest in downplaying or otherwise spinning.

Here are some of the key overarching details from Farrow’s piece:

Six women who had professional dealings with him told me that, between the nineteen-eighties and the late aughts, Moonves sexually harassed them. Four described forcible touching or kissing during business meetings, in what they said appeared to be a practiced routine. Two told me that Moonves physically intimidated them or threatened to derail their careers. All said that he became cold or hostile after they rejected his advances, and that they believed their careers suffered as a result.

“What happened to me was a sexual assault, and then I was fired for not participating,” the actress and writer Illeana Douglas told me. All the women said they still feared that speaking out would lead to retaliation from Moonves, who is known in the industry for his ability to make or break careers. “He has gotten away with it for decades,” the writer Janet Jones, who alleges that she had to shove Moonves off her after he forcibly kissed her at a work meeting, told me. “And it’s just not O.K.”

Thirty current and former employees of CBS told me that such behavior extended from Moonves to important parts of the corporation, including CBS News and “60 Minutes,” one of the network’s most esteemed programs. During Moonves’s tenure, men at CBS News who were accused of sexual misconduct were promoted, even as the company paid settlements to women with complaints. It isn’t clear whether Moonves himself knew of the allegations, but he has a reputation for being closely involved in management decisions across the network.  Some of the allegations, such as those against the former anchor Charlie Rose, as reported by the Washington Post, have already become public. Other claims are being reported here for the first time.

It also describes some situations in graphic detail, including a 1997 one involving Douglas. A sampling of that:

As Douglas attempted to turn the focus back to work, Moonves, she said, grabbed her. “In a millisecond, he’s got one arm over me, pinning me,” she said. Moonves was “violently kissing” her, holding her down on the couch with her arms above her head. “What it feels like to have someone hold you down—you can’t breathe, you can’t move,” she said. “The physicality of it was horrendous.” She recalled lying limp and unresponsive beneath him. “You sort of black out,” she told me. “You think, How long is this going to go on? I was just looking at this nice picture of his family and his kids. I couldn’t get him off me.” She said it was only when Moonves, aroused, pulled up her skirt and began to thrust against her that her fear overcame her paralysis.

…Moonves, she said, followed her to the door and blocked her path. He backed her up to the wall, pressing against her, with his face close to hers. “It was physically scary,” Douglas told me. “He says, ‘We’re going to keep this between you and me, right?’

Douglas wound up eventually being fired, with her show not airing, and she told Farrow Moonves said she wouldn’t “get a fucking dime” of the money she was owed and would “never work at this network again.” Both Moonves and CBS released statements to The New Yorker about that particular situation and the overall article:

In a statement, CBS said that Moonves acknowledges trying to kiss Douglas, but that “he denies any characterization of ‘sexual assault,’ intimidation, or retaliatory action,” including berating her on set and personally firing her from “Queens.”)

…In a statement, Moonves said, “Throughout my time at CBS, we have promoted a culture of respect and opportunity for all employees, and have consistently found success elevating women to top executive positions across our company. I recognize that there were times decades ago when I may have made some women uncomfortable by making advances. Those were mistakes, and I regret them immensely. But I always understood and respected—and abided by the principle—that ‘no’ means ‘no,’ and I have never misused my position to harm or hinder anyone’s career. This is a time when we all are appropriately focused on how we help improve our society, and we at CBS are committed to being part of the solution.”

…A statement from the company said, “CBS is very mindful of all workplace issues and takes each report of misconduct very seriously. We do not believe, however, that the picture of our company created in The New Yorker represents a larger organization that does its best to treat its tens of thousands of employees with dignity and respect. We are seeing vigorous discourse in our country about equality, inclusion, and safety in the workplace, and CBS is committed to being part of the solution to those important issues.”

A further statement relayed by Politico’s Jason Schwartz (in advance of the New Yorker piece’s publication) said the company would investigate:

“All allegations of personal misconduct are to be taken seriously,” CBS said in a statement. “The Independent Directors of CBS have committed to investigating claims that violate the Company’s clear policies in that regard. Upon the conclusion of that investigation, which involves recently reported allegations that go back several decades, the Board will promptly review the findings and take appropriate action.”

The “independent directors” part there is notable, as the company in general and Moonves in particular are in the midst of a legal battle with CBS vice chair Shari Redstone, who’s  the controlling shareholder of both CBS and Viacom through National Amusements thanks to the ill health of her father Sumner. Redstone is trying to put CBS back with Viacom through a merger (the companies split up in 2005), which Moonves and others oppose. And CBS’ statement goes on to touch on that:

“The timing of this report comes in the midst of the Company’s very public legal dispute. While that litigation process continues, the CBS management team has the full support of the independent board members. Along with that team, we will continue to focus on creating value for our shareowners.”

So there’s a whole lot of corporate intrigue in the background of all this, and that could play a role in the eventual outcome of these allegations. It should be noted, however, that Farrow began reporting this piece before the Viacom-CBS drama started, and that all the women making allegations against Moonves “said they were not motivated by any allegiance in the corporate battle.”

These allegations against Moonves are significant for the sports world. He holds a lot of power as chairman and CEO of CBS, and he’s been heavily involved in many of their sports moves, from getting Thursday Night Football (for 2016 and 2017, along with NBC) to launching CBS Sports HQ. And if these allegations do lead to an exit for Moonves (purely hypothetical at this point in time), that could make it easier for Redstone to merge CBS and Viacom.

Viacom’s current assets are mostly in the entertainment realm (Paramount, MTV, Comedy Central, etc), but the additional scale from a merger could be interesting when it comes to bidding on further sports rights, especially in a landscape where both AT&T (with the Time Warner deal, if it isn’t overturned) and Disney (with the Fox deal) have just gotten much bigger. However, there are many who think merging CBS with Viacom is a bad idea, as CBS has remained quite profitable recently and Viacom is having more issues, and that may be part of the stock decline here.

The response to these allegations against Moonves will be one to watch in the coming days, and we’ll see how the company’s investigation goes and what its outcome is. Whatever this leads to, it will have major implications for the sports world and beyond.