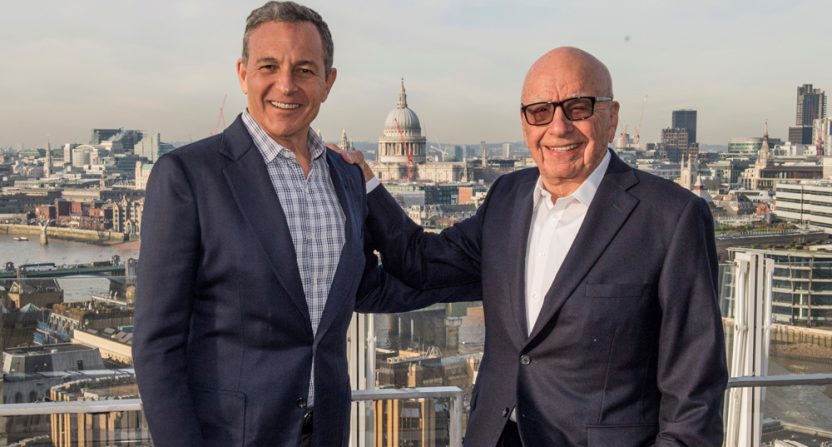 Unsurprisingly, it takes some time to complete a mega-merger between two of the biggest media companies in the world. So while we’ve been hearing about the Disney-Fox deal since last fall, it’s still just shy of the finish line.

Today was a very important step, though, as shareholders for both companies met to vote on the terms of the deal. According to The Hollywood Reporter, that meeting was short and ended with full shareholder approval.

Walt Disney and 21st Century Fox shareholders on Friday voted in favor of their $71.3 billion deal, in which Disney will acquire large parts of Fox, including the 20th Century Fox film and TV studio, Fox’s entertainment cable networks and its international assets.

Within eight minutes, the “combination merger proposal” from 21st Century Fox received a majority of votes from its shareholders to approve the deal for Disney to acquire a number of Fox assets.

The portion of Fox that Disney proposed to purchase includes the TV and movie studio, Star India, FX, Nat Geo, Fox’s 30 percent stake in Hulu and Fox’s 39 percent stake in Sky, the European pay TV company that Comcast is looking to acquire.

The deal also includes Fox’s collection of regional sports networks, first thought to be some of the most valuable assets in the deal. But Disney agreed to sell those separately to help ensure regulatory approval for the merger. Comcast made an attempt to insert itself into the bidding process, but their effort faced more hurdles than Disney, and now they’ve moved on to their efforts to purchase Sky, which Comcast CEO Brian Roberts confirmed yesterday, also via The Hollywood Reporter:

“It was a unique opportunity, and we were very disciplined in our approach to it, but we thought it was mostly about international expansion opportunity,” said Brian Roberts. “We are focused on Sky now.”

Comcast chairman and CEO Brian Roberts on Thursday said that a quickly rising price in the showdown with Walt Disney for big parts of 21st Century Fox caused the cable giant to drop out of the bidding.

“Ultimately, we pulled back because we thought that we couldn’t build enough shareholder value by making the price at which it seemed, in our judgment, to be possible to buy that, which was increasing,” the exec said on Comcast’s second-quarter earnings conference call in response to an analyst question.

Comcast did succeed in driving up Disney’s bid, though, to the point that not everyone at today’s meeting was on board:

At the Disney meeting, one shareholder complained the price was too high, but within 11 minutes the vote was tallied in favor of the merger.

Imagine being the one person in the room objecting. It must have been like someone voicing their objections at a wedding, only to be immediately overruled. So, now, we’re virtually assured of this deal going through. The effects on the sports, entertainment, and media industries going forward will be fascinating to watch.