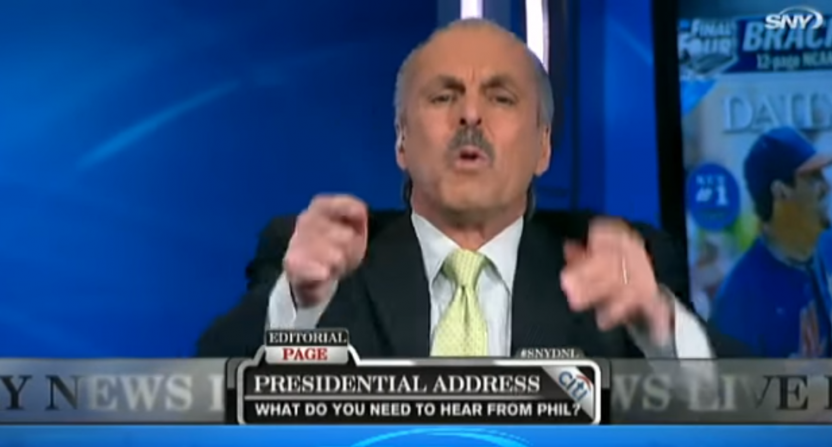 New York sports radio station WFAN is back in the news, and not for the best reasons. As per Janon Fisher of The New York Daily News, former sales executive Lauren Lockwood has filed a $5 million lawsuit alleging sexual harassment, drunken coworkers, salesmen looking to be reimbursed for hiring prostitutes and more. But some of the allegations Lockwood makes against midday host Joe Benigno are particularly significant:

In November 2014, when Lockwood’s desk was moved to the same floor as WFAN, Benigno took that as an invitation to flirt and brag about his sexual prowess, the suit said.

The sport-chat host would stop by her desk, rub her back and whisper in her ear about his sexual acrobatics, according to the suit. Benigno shared not-safe-for-work photos of his naked wife with a prostitute and invited her to join the couple for a menage a trois, she said in the suit.

Benigno, 64, also compared the physiques of other women in the office and carried on a two-year affair with a sales assistant, Lockwood claims.

When she rebuffed his advances, he fumed, “Can’t even give her a compliment,” she claims.

Benigno “whispered in [Lockwood’s] ear about having ‘threesomes’ with him and his wife and prostitutes,” the suit claims.

Benigno’s agent denied the allegations in a statement to the Daily News:

“Joe categorically denies the allegations,” Mark Lepselter said. “My father once told me on any story, always consider the source and those who live in glass houses. We’re more than prepared to handle the situation if need be.”

UPDATE: On Friday, Benigno was placed on leave by WFAN, via Newsday.

The whole lawsuit is available here (via Heavy.com):

And it has a whole lot else to say about Benigno:

Lockwood also claims Benigno told him about his fantasies about the company’s HR director, saying he can picture her being “wild in bed” and “hanging upside down from the chandelier,” according to the lawsuit. She also says Benigno admitted to having an affair with an unnamed female sales assistant. Lockwood claims the affair was well known around the office for two years.

Benigno also “frequently gawked at female employees and rated them on their physical appearances,” Lockwood claims. He told Lockwood, besides her, another woman was his favorite because she was “gorgeous and cool,” and then said two others were also in his “top 3,” saying they are “beautiful,” and the “body” on one of the women, “oh God.”

Lockwood also claims Benigno “flirted” with various female employees, telling one of the women he likes some “meat on the bones” and telling her to “shake it.”

Benigno has worked at WFAN for 24 years, and currently co-hosts the 10 a.m. to 1 p.m. show with Evan Roberts. For his part, Roberts opened Thursday’s show solo, and opened it by saying “I know, you know, there is a big story out there, I’m aware of it, but as you probably have guessed if you use your brain, I cannot talk about it. It is a story that involves the courts and the legal process. I do know the company is dealing with it and I can’t add anything personally. So we know that, so if you call in about it, you understand there’s nothing I can say. Now what I will do, and I’ve said this many times over the years, is we’re going to do a sports talk show. Sports is a distraction, and that’s what it is, and that’s what we’re going to do.”

Lockwood, 40, worked at WFAN from 2006 through last July, and per her suit, she ranked first amongst 65 sales staffers. But she was first suspended and then fired after a current and former employee got into a fight in a WFAN suite at the Barclays Center last July during a press tour stop ahead of August’s Floyd Mayweather-Conor McGregor. Lockwood said she was punched, pushed and knocked down while trying to stop the fight, but then was the only one punished, and was punished for inviting the former employee in.

Lockwood also claims that CBS Radio managers have prevented her from getting another job. Her suit also makes plenty of other notable accusations about the atmosphere at WFAN, including regular drunkenness on the job, sales trips to strip clubs, liquor bills running as high as $4,000 for events where execs hosted clients, a salesman asking to be reimbursed for hiring prostitutes, and unfair favoritism towards male employees. But the claims about Benigno particularly stand out here, and this whole thing is a terrible look for the station.

[The New York Daily News; photo from this 2014 Benigno rant about Phil Jackson on SNY]