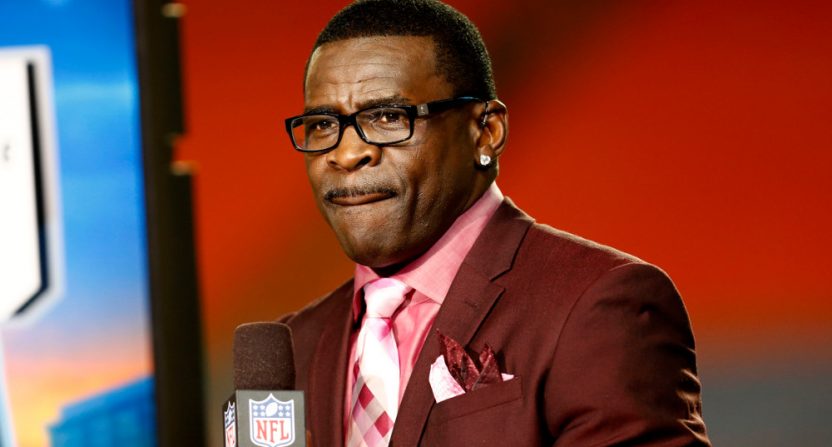 Last December, former NFL Network makeup artist Erin McParland wrote a first-person essay for SI.com in which she talked about the harassment she faced while working at the network, specifically naming both Michael Irvin and Eric Davis as harassers. She also blamed the network for poor HR practices that, according to her allegations, put her at risk of retribution.

Her account seemed like a lawsuit waiting to happen, and now it has, the second such lawsuit filed against the network. The first led to the suspensions of Marshall Faulk, Heath Evans, and Ike Taylor from their NFL Network duties, as well as the firing of Donovan McNabb and Eric Davis from their new gigs at ESPN, and it also led The Ringer to part ways with then-president Eric Weinberger, who had come over from his role at NFL Network.

This suit seems focused more on Irvin and Davis, as well as the network’s response to her initial HR complaints. Via USA Today’s A.J. Perez:

Davis subjected McParland to “unwanted advances” via Instagram messages, including remarking on her “flexibility and suggesting how good things could be” between the two.

“These communications were laced with sexual innuendo and suggestion which were both inappropriate and offensive,” McParland’s attorneys wrote in the lawsuit. “When the next football season began defendant Eric Davis was able to continue his inappropriate behavior including but not limited to making physical contact.”

Irvin “made inappropriate gestures and comments to (McParland) and once grabbed (McParland’s) waist” against her wishes.

The lawsuit seems to fit with McParland’s first-person narrative, which shouldn’t be a surprise. From her essay in December:

The next time I was in makeup and Davis was leaving, he leaned in for another hug. This time, not only was the hug too long, but it was too close. I could feel him pressing and rubbing his genitals into my leg. I felt frozen, numb.

The third and final incident was full-on predatory, and it came during the filming of Total Access, one of the network’s premier shows. Davis went in for a hug and then, with both hands, grabbed and fondled my buttocks. I instantly pulled away, recoiling. I looked him in the eyes and firmly told him, “Hands off.”

That essay also accused NFL Network of mishandling her complaints, leading to at least one incident in which she feared for her safety. The filing covers that as well, again via USA Today:

McParland complained to human resources about Davis and Irvin, but the lawsuit claimed no action was taken until another female employee lodged similar complaints against Davis. The NFL told Davis “the best course of action was for Davis to leave NFL quietly,” according to the lawsuit.

McParland was assured via text messages that Davis would not be allowed to confront her, but Davis did just that in an off-set trailer where he “aggressively stood over” her, according to the lawsuit. An NFL human resources executive apologized for the “mishandled situation.”

That account is definitely a horrifying example of why a lot of women are afraid to come forward with their stories of workplace harassment. Irvin is still listed as current on-air talent for NFL Network.