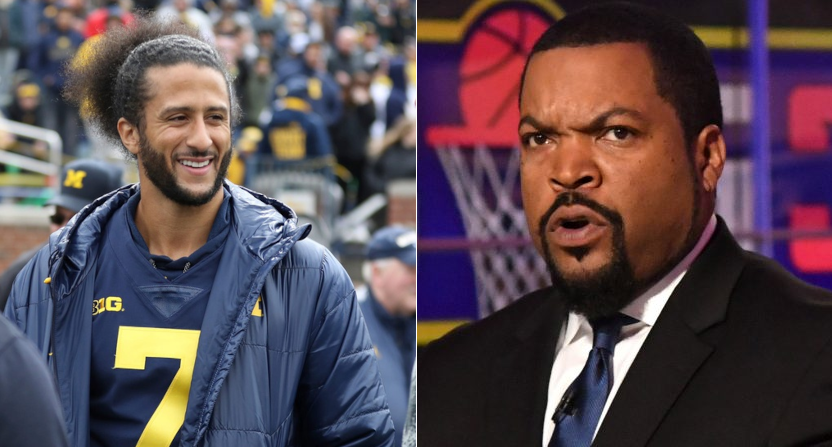 One of the stranger media stories in a while comes from reports on if or not Colin Kaepernick was investing in the BIG3 three-on-three basketball league. On Wednesday night, Shams Charania of The Athletic and Stadium reported that Kaepernick (seen at left above), and that his investment might help the league (co-founded by Ice Cube, seen at right above during their 2018 draft) stave off a potential shutdown. Charania has since deleted that tweet, but here’s a screencap of it.

Colin Kaepernick is investing in Ice Cube’s BIG3 league, which was on the verge of potentially shutting down, sources tell @ShamsCharania.

Kaepernick’s new deal will help the 3-on-3 competition continue operating and growing. pic.twitter.com/0I8kuV5GSn

On Thursday morning, The Athletic reported that a representative for Kaepernick denied that story. Their tweet credited Charania, but the story is bylined just “The Athletic staff” (a typical practice for them with news in other sports, but many of Charania’s transactional reports are on their site as “Shams Charania and The Athletic staff.”). Here’s that tweet:

A representative for Colin Kaepernick tells The Athletic that the former NFL QB is not investing in Ice Cube’s BIG3, despite sources close to the league saying otherwise.@ShamsCharania with the latest on the uncertainty surrounding the BIG3: https://t.co/Qwn3J9TWSf https://t.co/fhSzpQuTBL

Here’s the key part of that story:

Despite sources close to hip-hop artist Ice Cube’s BIG3 league saying Colin Kaepernick is joining as a new investor, a representative for Kaepernick denied the former NFL quarterback’s involvement and said he is not investing.

Sources close to the league claimed that Kaepernick’s investment would allow the league to continue operating. Multiple players with the BIG3 league had been preparing for a potential shutdown, sources told The Athletic.

It’s definitely unusual to see the same media outlet report things that contradictory in a short span. But the identification of the first report as “sources close to the league” in Thursday’s piece (when it was previously just “sources”) perhaps illustrates what happened here. Still, there probably should be some skepticism with and further vetting of anything sources close to a league “on the verge of potentially shutting down” say.

Of course, it’s also worth considering that plenty of publicly-denied negotiations in the past have in fact happened, and they’ve sometimes even turned into deals despite the denial. And the “It’s just not true” isn’t even necessarily a denial that there had been discussions; it’s a denial of Kaepernick making an investment. But the bluntness of the denial from Kaepernick’s representative certainly raises some questions about the validity of the initial claim from the “sources close to the league.”

As Mike Florio notes at Pro Football Talk, this is also interesting considering how the NFL announced a partnership with Ice Cube just a week ago. Here’s more from the NFL release on that:

The collaboration focuses on identifying League-wide opportunities in the financial, tech, and production sectors, with a concentration on increasing direct and indirect spend to national Black businesses to help close America’s racial and economic wealth gap.

“For more than a year, the CWBA Institute has been working closely with the NFL on identifying resources to build stronger, more substantive economic partnerships with the Black community,” said Ice Cube. “Our team at CWBA, including my longtime business partner and entertainment lawyer Jeff Kwatinetz, and advisors Ja’Ron Smith and Chris Pilkerton, are focused on building corporate partnerships with measurable economic growth outcomes for Black communities across the country. We believe this is a giant step in the right direction.”

As for the BIG3 itself, it was founded in 2017 by Ice Cube and Kwatinetz. It initially aired on Fox and FS1 on a one-day delay, then went to live broadcasts in 2018 and added Facebook broadcasts then, then agreed to an exclusive deal with CBS and CBSSN in 2019. Its 2020 season was cancelled due to COVID-19 (there was talk of a quarantine reality show/tournament, but that never materialized), but it returned in 2021 with games on CBS. The league has also made a large number of off-the-court headlines, from bidding for the former Fox regional sports networks “for the culture” and complaining to the FCC that providers had already decided not to carry those RSNs that they hadn’t even won yet (and which they would not win) to taking out ads asking President Trump to side with them in a dispute with the Emir of Qatar to lawsuits and odd exits.

This year’s BIG3 season began in June with two weekends of games in Chicago. It’s set to continue with games in Dallas each weekend through August 7, then playoffs in Tampa on August 14. This week has three scheduled games both Friday and Sunday, with Friday’s broadcasts on DAZN, VYRE, and YouTube, and Sunday’s on CBS and Paramount+. We’ll see if more comes out about the league being “on the verge of potentially shutting down,” and what that means for the scheduled games.