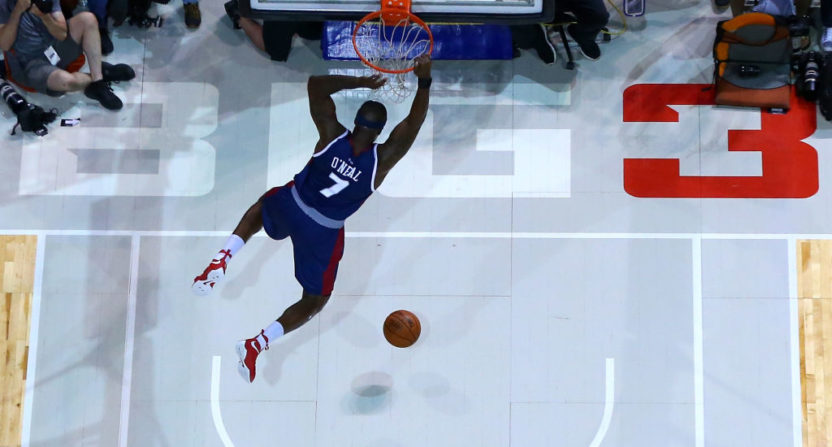 It’s been one of the most anticipated launches this summer and Big3 basketball is already underway. The league put together by Ice Cube with rosters filled with former NBA players participating in 3-on-3 half-court basketball began its inaugural season Sunday with four games played in Brooklyn. However, the games at the Barclays Center weren’t aired live. In fact Fox Sports’ Public Relations Twitter account noted on Sunday that you’ll be seeing the action a day after the fact:

#BIG3 about to tip off from @barclayscenter in #Brooklyn! Catch the action tomorrow on @FS1. pic.twitter.com/CpPnQhD9tO

#BIG3 is buzzing all over the world! See why tomorrow at 8:00 PM ET on @FS1. pic.twitter.com/bwfk3FVwpI

Even in the press release announcing the full schedule, Fox stated that games would be played on Sundays with some NBC Olympics-style packaging for air the following night:

BIG3 games will be played every Sunday in a different city, in a quadruple header at the same venue. Games will be presented the following night in primetime at 8 p.m. ET on FS1 in a thrilling “Monday Night Basketball” experience.

So Fox did say ahead of time that it was going to do this, but in this day and age, the question is why? Perhaps with the quadrupleheader of games, there’s going to be some downtime, but at least why not put the games online and then allow for some packaging the following day?

There was reaction on Twitter wondering why the games weren’t being aired live:

Why does FS1 think anyone gives a shit about races? Put the Big3 on

FS1 made a costly mistake not putting #BIG3 live on air

Hey @FS1. No big deal or anything, but your decision to not air the Big3 debut live is the worst thing that has ever happened to me.

RETWEET if you think @thebig3 and @FS1 should televise live games! ?#Big3

everyone: live sports, live whatever, i'll pay whatever to get live streaming rights

.@MartySmithESPN discusses what BIG3 basketball is all about with Allen Iverson, Jason Williams & Ice Cube.

And the Worldwide Leader even aired some highlights of Big3’s first day on its Sunday night edition of SportsCenter so Fox released some video to its rival. Perhaps Fox is thinking that by allowing ESPN to air highlights, it’s promoting programming on a rival network. But even so, it’s 2017. We expect our sports live and if not on TV, at least online.

Fox will air the Championship Finals in Las Vegas live on August 26, but by that time, will we see any live Big3 action? Right now, that seems unlikely.

Perhaps this a one-year experiment and Big3 is gaging the reaction to tape-delayed basketball. It seems strange to be doing this in 2017, but Fox has its reasons and we’ll see if it works.