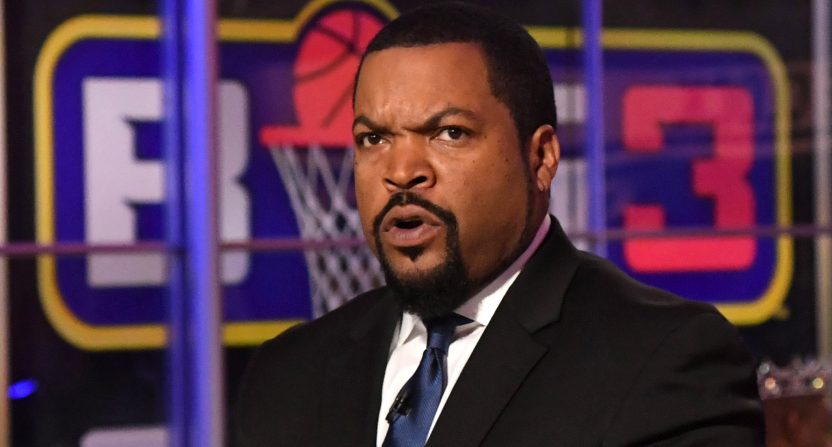 It’s no secret that there are plenty of people looking for sports programming at the moment, and that there isn’t much being offered thanks to many leagues suspending or cancelling their seasons due to concerns about the spread of the COVID-19 coronavirus. Some sports-adjacent programming has continued, specifically closed-house WWE and AEW wrestling shows from Florida, as have some studio shows, but launching something entirely new during this pandemic is a different move indeed. That’s reportedly what the BIG3 (the three-on-three league founded by Ice Cube (seen above) and Jeff Kwatinetz, which is expected to begin its fourth season in Memphis in late June) is trying, though, with Yahoo’s Chris Haynes reporting Thursday that the league is planning on launching “a quarantined, reality show-style three-on-three tournament” in April. Here’s more from Haynes’ piece:

The Big3 plans to launch a quarantined, reality show-style three-on-three tournament in April to help curb the nation’s appetite for basketball in the aftermath of the coronavirus sports hiatus, league sources told Yahoo Sports.

The founders of the league — hip-hop icon and actor Ice Cube and entertainment executive Jeff Kwatinetz — have been having ongoing conversations with multiple TV networks since late last week to broadcast the tournament, which is expected to also garner international interest, sources said.

The preseason tournament will feature 16 to 22 players from The Big3 who are negative for the coronavirus, and they will be quarantined in Los Angeles, sources said.

How are they going to make that work? Well, Haynes’ piece goes on to say that players will be quarantined in a home provided by the league and a basketball court will be built there, and production crews (which would be “stationed nearby but offsite from the players”) will capture “the games and the players’ daily lives.” So it’s The Ultimate Fighter meets Big Brother, but with more 3-on-3 basketball featuring ex-NBA players. However, there would seem to be a whole lot of concerns about this given legislative crackdowns on assembly, which have forestalled other attempts to put on sports events. For example, the UFC was planning to go ahead with closed-house events of its own at its APEX facility in Nevada, but eventually postponed three events outright given the outbreaks there.

And California is one of the states hit hardest by this pandemic so far. That led to state governor Gavin Newsom calling Sunday for bars, breweries, wineries and nightclubs to shut down and for restaurants to go to half capacity. And Los Angeles County has been hit hard, declaring a state of emergency locally on March 4 and announcing 190 cases and one death in the county as of 3 p.m. Eastern Thursday. Here are some key parts from an order sent out by County of Los Angeles health officer Muntu Davis earlier this week, some of which might seem to make it difficult for the BIG3 to go ahead with this plan:

“This order prohibits all indoor private and public gatherings and all outdoor public and private events within a confined space, where at least 50 people are expected to be in attendance at the same time.”

“For all gatherings which are not prohibited, the Health Officer orders the event and gathering holders and venues to implement the following infection control precautions: (1) enforce social distancing within the confined space by requiring attendees to be separated by six (6) feet…”

“…This order immediately requires closing the following types of businesses.

(1) Bars and Nightclubs that do not serve food.

Granted, that order only currently runs through March 31, so if it’s not extended, it wouldn’t apply. But there seems to be a good chance that many of these precautions may be extended beyond that. And while the BIG3’s plan wouldn’t violate the 50 person part of this (presuming the production crew is small, at least), it sure seems like you won’t be able to separate participants in a three-on-three tournament by six feet. And this house would sure seem to carry some elements of either a gym or a live performance theater depending on how you define it. Maybe they’ll be able to get an exception if they demonstrate that absolutely everyone involved in the tournament and the production crews has tested negative for COVID-19, but given the issues finding tests at the moment, that doesn’t seem easy either.

If the BIG3 is actually able to pull off a quarantined three-on-three tournament in April, there will probably be some takers on the broadcast side. They have a current deal for their regular broadcasts with CBS, and they worked with Fox Sports before that; they’ve also streamed games on Facebook. (And they tried to buy the Fox regional sports networks, but that didn’t pan out.) And there are a whole lot of networks looking for sports programming right now, to the point where even former NBA players competing in 3 on 3 in a quarantined house may have some appeal. But it seems like there will be some challenges to getting this idea off the ground, especially with the current plan to do it in Los Angeles. Kwatinetz was optimistic in his comments to Haynes, though:

“As long as we can protect the players, which we will do through proper testing and quarantine, Ice cube and I feel we can give fans some safe, entertaining brand of basketball to get everyone through this pandemic,” Kwatinetz told Yahoo Sports. “Cube and I have been in the entertainment business for 30 years. This is our job. People want to be entertained with all we’re going through and enjoy our sports. We think this will help.”

We’ll see if they’re able to do this, and if it does actually help.