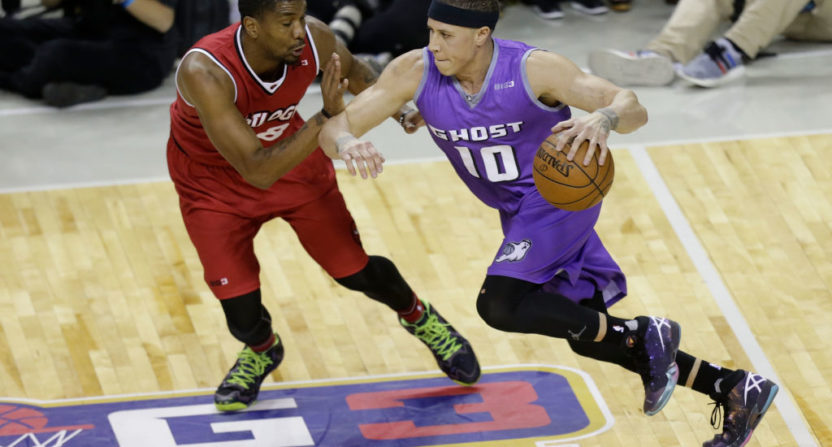 The BIG3’s offseason has been full of off-court drama, from taking out a full-page New York Times ad asking U.S. president Donald Trump to intervene in their dispute with investors from Qatar to the exit of commissioner Roger Mason Jr. (since replaced by Clyde Drexler) amidst a flurry of back-and-forth allegations, to claims in court those aforementioned investors tried to use the league to bribe Steve Bannon to another lawsuit from former chief creative officer Kainoa Henry claiming a hostile work environment, racist comments and too much discussion of Bannon.

With all that, it would be easy to lose sight of fact that the league is actually going to start June 22, but Fox announced details Tuesday for what to expect on the broadcasting side this year, and a new wrinkle involves a weekly game on Facebook.

The league will have its games on Fridays this year, playing four games each week, and the first one will air on Facebook (on the BIG3 on Fox page, both in the U.S. and globally). That will lead into three other games on Fox or FS1. Facebook will also have highlights and recaps from the other games.

FOX Sports announced today a multiplatform distribution plan for the 2018 season of BIG3. Each week, a game will stream live exclusively on Facebook, leading in to three additional games which will air exclusively on FOX or FS1 (simulcast live in the FOX Sports app) during the regular season and playoffs. The first BIG3 game to stream on Facebook will feature a match-up between 2017 BIG3 MVP Rashard Lewis’ 3 Headed Monsters and Mike Bibby’s Ghost Ballers on June 22 from Houston, TX, followed by Chauncey Billups’ Killer 3’s and Dermarr Johnson’s 3’s Company; Corey Maggette’s Power and Brian Scalabrine’s Ball Hogs; and Kenyon Martin’s Trilogy and Jermaine O’Neal’s Tri-State on FS1.

“As a start-up professional sports league, we have an innate flexibility that allows us to adapt and cater to our growing audience,” said BIG3 co-CEO Jeff Kwatinetz. “Given that our fans had an average age of more than 10 years younger than typical basketball fans, we want to provide digital viewing experiences so they can engage with our league in a format that best suits their viewing preferences. We couldn’t be more excited to work with FOX Sports and Facebook to present the BIG3 in a new and exciting format for our fans.”

…“We’re proud to partner with FOX Sports to bring the excitement of live BIG3 basketball to fans on Facebook,” said Devi Mahadevia, Facebook Live Sports Programming Lead for North America. “Basketball conversation doesn’t have an offseason on our platform, so we’re excited for these social-first broadcasts to amplify this engagement over the summer and help FOX Sports bring the big names and big plays of the BIG3 to new audiences around the world.”

This adds to the whole pile of sports content on Facebook, but it does have some advantages compared to other offerings there. For one, this is live sports (thankfully, not the one-day-delayed BIG3 approach Fox took last year) instead of shoulder programming. And while some live sports broadcasts on Facebook (particularly MLB ones) have drawn ire for production decisions, porn bots, and even just being exclusively on Facebook instead of TV (where many viewers expect baseball games to be), it’s a different scenario when you’re talking about airing something relatively new that probably wouldn’t be seen otherwise versus taking existing content from a different platform. And with the BIG3’s claim that their audience is so young, that likely means the audience is more tech-savvy and more comfortable with streaming broadcasts than, say, a MLB audience.

Of course, that doesn’t mean that this will draw massive numbers. MLB broadcasts on Facebook haven’t brought in huge audiences, averaging just 65,000-85,000 concurrent viewers per game, and MLB is much more established than the BIG3. But, an advantage for the BIG3 is that it’s providing basketball games during the NBA’s offseason (the championship is August 24, so this is strictly a summer league), and doing so with plenty of recognizable former NBA players. And unusual basketball content has sometimes done well on that platform, particularly with Ball in the Family.

And the BIG3 Facebook game each week isn’t competing with other BIG3 content, unlike baseball, where there are always lots of games going on, and any given game is more relevant to the overall BIG3 standings (it’s only a 10-week season, with each team playing one game per week) than a typical MLB game (1 out of 162). So if there are people who really are passionate about this league, they have incentive to watch all the games, even the ones on Facebook.

At any rate, it’s interesting to see the BIG3 get what looks like a better broadcasting setup in its second year. It will now have games shown live on Fox and FS1 instead of on tape delay, plus the weekly game on Facebook. The day-long tape delay last year was a terrible idea, with a whole lot of discussion of the results on social media long before games ever aired, and it’s promising to see that they’ve been able to move away from that. There are still a whole lot of questions around this league, especially with all the various legal drama, but it looks like it should be easier to watch the BIG3 this year for those who care. We’ll find out just how many do care.