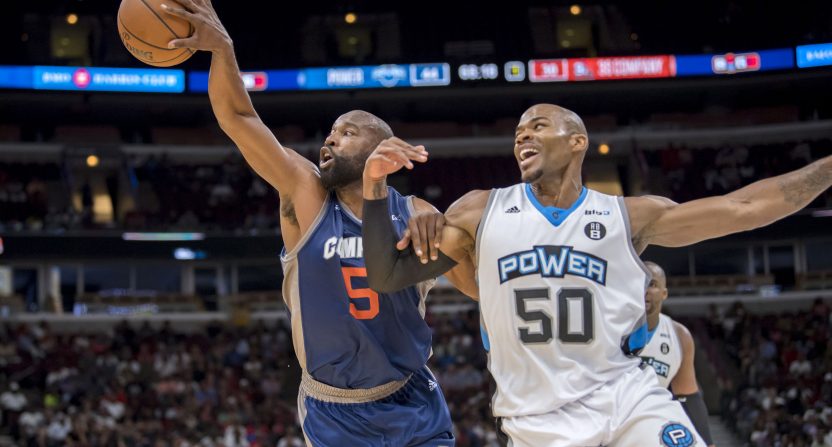 BIG3 has only been in existence for two years, but Ice Cube’s 3-on-3 basketball venture has already evolved into a viable property, drawing very solid ratings for Fox last year in its second season. Distribution for the 2019 season was up in the air, with Ice Cube and other investors involved in a play for the Fox RSNs, but now the league has signed an exclusive deal with CBS.

CBS announced the deal this morning via a release:

BIG3 and CBS Sports announced today that the professional 3-on-3 basketball league, founded by producer, actor, and music legend Ice Cube and entertainment executive Jeff Kwatinetz, have agreed to terms that will bring live basketball to CBS and CBS Sports Network. The 2019 season will open on the CBS Television Network in primetime on Saturday, June 22 (8:00 PM, ET).

CBS Sports Network will also air the BIG3 Draft live on Wednesday, May 1(10:00 PM, ET) when 120 professional players will vie for only 31 open roster spots on 12 teams, expanded from eight the first two seasons.

Getting so many games on broadcast CBS is a big deal for the league, obviously. Maintaining their broadcast network presence goes a long way towards legitimizing it as a property, and while it’s no guarantee of long-term success (RIP AAF) it’s certainly a good move. It also makes more sense for a growing league than taking on a massive amount of debt in an effort to purchase a network of RSNs, too.

Everyone involve sounds pleased, as you’d probably expect from a press release:

“Since day 1, BIG3 has always been about hard-nosed, fierce competition. Now we’re ramping it up with more teams, younger players, and a shiny new TV deal with CBS Sports,” said Ice Cube. “Our first two years were about showing that our vision was credible. This year is about taking the game to a whole new level. This is a big deal.”

“The enthusiasm of the BIG3 from sports pioneer Sean McManus and his team of, David Berson, Dan Weinberg, and Greg Trager was infectious,” said BIG3 Co-Founder Jeffrey Kwatinetz. “The future is bright for the BIG3, and it’s an incredible advantage to build on the success of the BIG3 by partnering with the number one network and drawing off the experience of the team that broadcasts some of the biggest and most prestigious championship games in sports.”

“We’re excited to partner with such an exciting and fast-growing league that showcases some of the most recognizable basketball players in the world,” said Dan Weinberg, EVP of Programming, CBS Sports. “Adding multiple hours of BIG3 coverage during the summer to both CBS and CBS Sports Network – including direct lead-ins – establishes more synergy and continuity between the broadcast and cable network, while delivering these action-packed games to a national audience throughout the entire season.”

The party that could perhaps benefit the most, though: CBS Sports Network, which just lost another professional property (RIP again, AAF) and stands to gain something with proven viewer interest. It feels like a good deal for everyone, and it also seemingly removes a potential (albeit long-shot) bidder from the endless Fox RSN sale saga.