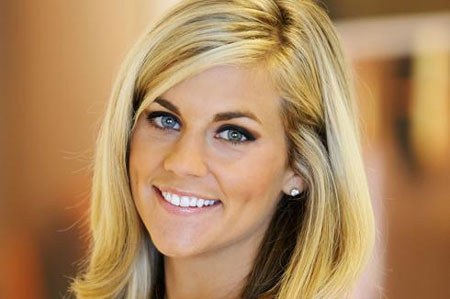 This year has brought to the forefront a discussion worth having in regards to the current place of women in sports media.  Although one might think that progress has naturally been made over the years and that in 2014 the industry would finally be somewhere close to being equitable, the past calendar year has proven that to not be the case.  Not by a longshot.

In fact, going back to San Francisco radio host Damon Bruce telling women to get out of his sandbox, it was an ugly year for societal progress in sports.  Not only did we have that neanderthalic episode, you had the knuckledraggers in Boston and their obscene comments towards Erin Andrews.  Then there was all the abuse Sam Ponder took from the gutters of social media for daring to have an opinion on the way women are treated online.  And finally, Fox’s highly-publicized demotion of Pam Oliver.

Thankfully, there are some signs that positive steps are being taken.

First, CBS Sports Network is launching the first all-female nationally televised sports talk show featuring many of their leading personalities like Lesley Visser, Allie LaForce, Tracy Wolfson, Dana Jacobsen and more.  While that show is transformational on the national television landscape, it has fallen under some healthy skepticism.  Most significantly, the belief that women shouldn’t be herded into a corner and limited to giving opinions for an hour a day as a marketing gimmick, but that they should be involved in the 24/7/365 sports discussion.  That sentiment was the thrust of Katie Nolan’s blistering commentary on the NFL and sports media from earlier this month:

“The NFL will never respect women and their opinions as long as the media it answers to doesn’t.”

While the NFL is still bumbling around in the dark in terms of its outreach towards female fans, the sports media may finally be listening to those calls for inclusion.

On four separate occasions in the past two weeks, we’ve seen women take on previously-unseen roles on major studio shows as part of panel discussions right next to the men.

1) First, former Oakland Raiders executive Amy Trask joined CBS’s set before the widely-watched Ravens-Steelers game in the immediate aftermath of the Ray Rice video release.  Although Trask should have been given all of Deion Sanders’ airtime that night, having her there between Bill Cowher and James Brown was a positive development.  Her quality work on That Other Pregame Show deserves a larger platform.

2) Over on Fox Sports 1, their flagship show Fox Sports Live ran a three-part series on the NFL in Crisis last week.  In Part III, Pam Oliver joined the roundtable discussion as a panelist.  Furthermore, moderator Charissa Thompson was able to have more latitude to speak her opinions on the subject as well.

3) During live coverage of Roger Goodell’s press conference on Friday afternoon ESPN had Bob Ley anchor the coverage with a panel of experts.  This included ESPN/NFL mainstays like Chris Mortensen, Bill Polian, Herm Edwards, and Jane McManus of espnW.  McManus has been offering valuable writing and reporting on the NFL’s domestic violence controversy since the outset.  In fact, she’s been a regular presence on ESPN airwaves across a variety of platforms as this ongoing controversy continues to capture the attention of the nation.

4) Finally, stepping outside the NFL and into college football, Sam Ponder was involved in a discussion on College GameDay regarding Jameis Winston’s suspension from the Clemson game for shouting a vulgar internet meme.  Ponder’s brief commentary drew praise from GameDay viewers and several writers around the sports sphere as she spoke about Winston’s need to mature:

“Here’s what I’m not buying. I’m not buying that the expectations are too high. Here’s what we’re asking from him: We’re asking that you don’t lie, you don’t cheat, you don’t steal, and you don’t disrespect women,” Ponder said. “And I know people want to say, ‘Oh, he’s naive and there’s some immaturity there.’ I just think we’re not giving him enough credit. He knows right from wrong. He understands that the things he’s done are wrong but he continues to make those same mistakes.”

Five years ago, maybe even just one year ago, I doubt any of those women would have been offered the chance by those networks to give their opinions in that way.  Rewind just a couple years and it would be unheard of to give sideline reporters an opportunity to be a panelist with other football analysts, no matter the discussion.

Perhaps these examples are proof to the backwards people still out there that sports as they know it will not disappear from existence and fall victim to the “wussification of America” if women are given opportunities like this.  Given the nature of the story, it’s really a no-brainer to involve women in discussions about the NFL’s domestic violence crisis.  One might hope, however, that this is the beginning of expanding roles for the Trasks, Olivers, McManuses, and Ponders of the world – and that it won’t take stories of this nature to involve them in the sports discussion on a daily basis moving forward.