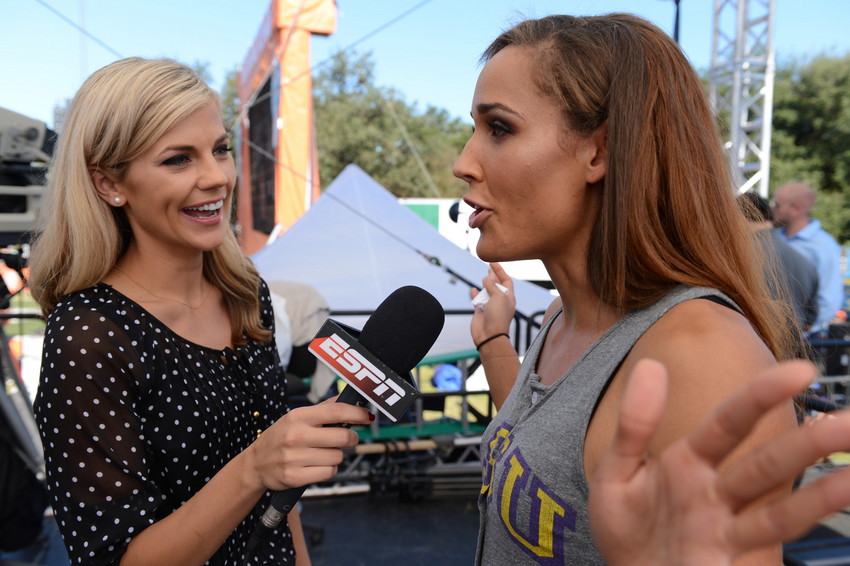 ESPN personality Sam Ponder tweeted this thought about the outrage over the NFL’s mere 2 game suspension for Baltimore Ravens RB Ray Rice for assaulting his fiancee.  The outrage was justified over the NFL and Roger Goodell’s total lack of awareness for saying that domestic abuse was a lesser crime than getting caught taking the wrong prescription medicine and a litany of other offenses.  Ponder took the conversation surrounding the backlash a step further to open up a wider discussion about how women are treated in the wider sports culture.

Blogs/websites that constantly disrespect women & objectify their bodies, then take a strong stand on the Ray Rice issue really confuse me.

She makes an excellent point about the objectification of women happening all around us (hello, WEEI in Boston) and while not equating the two, the whole notion that “women are things” is a real issue that needs addressed.

Of course, the endless array of slideshows ranking the hottest women in sports, sexiest sideline reporters, and you name it are done for a simple reason – pageviews.  And in the business of online content, that’s the right of those websites to do so.  However, as someone who has probably been in more than enough of those slideshows herself, it’s Ponder’s right to ask where the line is as far as admiring versus objectifying women goes.  All too often, women in sports don’t get a say in this discussion and their voice isn’t heard.

Unfortunately, Ponder’s Twitter mentions proved her point for her as it devolved into personal attack after personal attack against her from the worst of the social media cesspool and mouthbreathers who think women are just meant to look at.  Some of these tweets are NSFW, many of them are vile, all of them prove the point that there is a troubling element of the online sports culture that is exactly what Ponder was talking about…

@sam_ponder @ChrisMcCurry518 sam – put the phone down. I think the baby is crying.

Destroy me & the generation is fixed!Who knew it was so simple RT@Chris_Mini @sam_ponder is whats wrong with this generation.Get a clue lady

@sam_ponder @ChrisMcCurry518 you were too. You know you fucked up and now you're trying to clean up your shit. Typical woman.

@sam_ponder the dumbest thing I've read on Twitter in weeks. Congrats. You're entire career is based on being good looking.

@stoolpresidente @sam_ponder hey Sam, you're hot and NOBODY gives a fuck what you say. Not even ya husband #onbible

@sam_ponder 100% talking about barstool. Used to like you but you're clearly a fucking moron. Bible thumping freak.

The scary thing is that these are only a few tweets from many more keyboard warriors who either A) Couldn’t rationally understand Ponder’s tweet or B) Didn’t care to try to understand it.  Ponder’s mentions are a horrifying place to visit if you want to feel good about society today.  Another scary thing is that all of these very angry people from the lower rung of social media are all men.  What kind of man could tweet such abuse to another human being, especially making fun of Ponder’s newborn child?  It’s disgusting.

Sam Ponder tried to open up a grown-up conversation about the place of women in the online sports culture.  Sadly, she got her answer as to how far away we are from having that conversation.