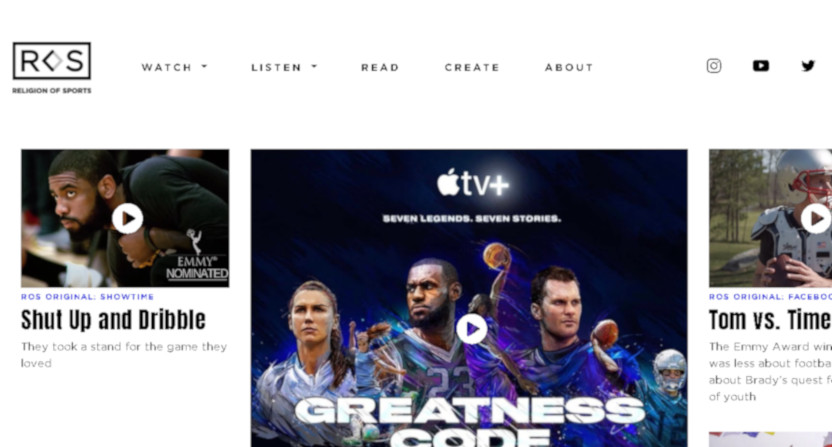 It’s been a busy year so far for Religion of Sports, the Gotham Chopra/Tom Brady/Michael Strahan-fronted company that’s spawned a documentary series on sports around the world, docuseries on athletes like Brady and Steph Curry, podcasts, spinoff initiatives with the likes of NBC Sports and Apple TV+, and more. Back in January, the company announced the hire of veteran TV industry figure Ryan Stowell to lead their scripted department. This week, RoS made three more big announcements, relaying news of a Simone vs. Herself Facebook Watch docuseries on gymnast Simone Biles, revealing details on the upcoming Man in the Arena Brady docuseries, and announcing two new hires. First, here’s information on the Biles series (coming to Facebook Watch this summer), via a ROS release:

Simone vs Herself will follow the journey of one of the greatest athletes of all time as she seeks to further challenge herself and what is possible as a gymnast. A 19-time World Champion and four-time Olympic gold medalist, Simone has already reached the mountaintop. But as the series will reveal, there are peaks left to scale while balancing adversity – from adjusting to a postponed Olympics to conquering the challenges that come with success and the weight of enormous expectations. While the sport of gymnastics is filled with talented athletes, and competing on the world stage is a unique accomplishment in and of itself, this is the journey of Simone in pursuit of being the very best she can be.

“Our Versus series with Facebook Watch has always been about pulling apart the elements that power the GOATs. There’s really no one in the world more apt for that description than Simone Biles – she’s in a class by herself,” said Gotham Chopra, co-founder of Religion of Sports. “Facebook Watch has been an incredible partner and platform to bring this unique series to an engaged audience, and we are excited to premiere it in 2021.”

“My gymnastics career has been filled with a lot of ups and downs despite what a lot of people may think, and, in a lot of ways, my career has felt like I’ve been trying to prove myself to others,” said Simone Biles. “My mom has always encouraged me to be the ‘best Simone I can be’ and I now have a true appreciation for what that really means, which is one of the big reasons I wanted to come back for Tokyo. I want to challenge myself to be the best Simone I can be for me and, no matter the outcome, share with my fans the process and approach I am taking along the way in the hope that it may help inspire others to be the best version of themselves too.”

That will mark RoS’ third “Versus” series, following Tom vs. Time and Stephen vs. The Game. And those documentaries have both been done well and have attracted a lot of attention, and Biles seems like a great fit as a third subject there. Meanwhile, speaking of Brady, here’s this week’s new trailer on the upcoming Man in the Arena nine-part series on him, headed to ESPN+ this fall:

Religion of Sports also announced two notable hires this week, bringing in EJ Laratta and Melissa Radzimski. Here’s more from a RoS release on them:

EJ Laratta was previously VP of Partnerships at Red Bull North America where he led partnerships with brands such as BFGoodrich, Activision, Kia Motors, Adidas and others. In his role at RoS, EJ’s primary responsibility will be to drive revenue by generating strategic partnerships both domestically and globally.

Melissa Radzimski was previously a senior producer at the Emmy Award-winning media company, Great Big Story, where she and the social team won a Shorty Award for “Best Instagram Presence”. In her RoS role, Melissa will oversee the company’s digital strategy and helm a production team that focuses on short-form documentaries made for social media platforms about the intersection of sports and culture.

…“Religion of Sports always is focused on our voice and point of view – using different mediums and avenues to answer the question ‘Why Sports Matter’,” said Ameeth Sankaran, Religion of Sports CEO. “We are excited for EJ and Melissa to join and help us expand the amount of content and the partners we work with to further evangelize the message.”

“I passionately believe in Religion of Sports’ mission, which is to tell meaningful and inspirational stories using sports as the language,” said EJ Laratta. “RoS is in a unique position to help brands compliment that investment with (award winning) storytelling that resonates far beyond avid sports fans.”

“I’m so excited to be a part of the Religion of Sports family, to help grow our digital platforms, and engage with the RoS community,” said Melissa Radzimski. “Some of the best sports media companies focus on highlights or viral moments; while we will always be part of those conversations, we strive to go even further by leveraging the power of RoS’ storytelling to social media and digital audiences.”

We’ll see what’s ahead for Religion of Sports, and for these particular projects. But they certainly have lots of high-profile projects in the pipeline.