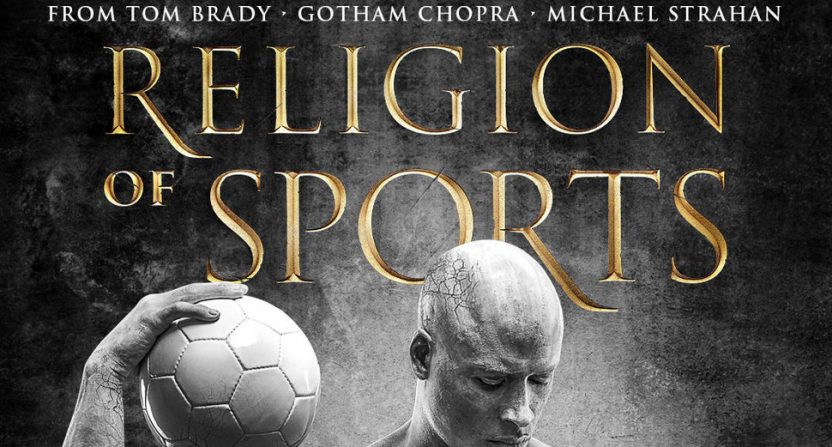 The Gotham Chopra/Tom Brady/Michael Strahan Religion of Sports brand has grown from its titular documentary series on Audience to a startup company, a podcast, the Shut Up and Dribble Showtime documentary with LeBron James, and other documentary series with the likes of Brady and Steph Curry. And now, they’re teaming up with NBC Sports Regional Networks for a cross-platform mental health and men’s health issues initiative called “HeadStrong: Mental Health And Sports,” which will include a 60-minute documentary shown on the various networks. Here’s more from a release:

NBC Sports Regional Networks today announced a partnership with Religion of Sports – the Sports Emmy-winning media company founded by Tom Brady, Michael Strahan, and Gotham Chopra – to develop and produce Head Strong: Mental Health and Sports, a comprehensive multi-platform content initiative on mental health as well as men’s health issues. The joint project, which will launch in November to coincide with Men’s Health Awareness Month, is highlighted by a one-hour documentary that will be presented nationwide across NBC Sports Regional Networks and other NBC local and national platforms. Six-time Pro Bowl receiver and Founder of House Of Athlete Brandon Marshall serves as an executive producer.

…“Mental health issues have been pushed to the forefront of our national conversation,” said Ted Griggs, President, Group Leader and Strategic Production & Programming, NBC Sports Regional Networks. “Thanks to athletes like Brandon Marshall, Kevin Love, Michael Phelps, and Missy Franklin, and executives such as NBA commissioner Adam Silver, we know that our sports heroes face mental health challenges, just like so many others. We hope this project will advance that conversation and show people that resources and assistance are available to everyone.”

“Over the last few years, in working closely with a number of elite athletes, it’s become clear to me that more than their physical gifts and relentless training, it’s the ‘mental game’ that separates the very best,” said Religion of Sports Co-founder Gotham Chopra. “The ability to focus, block out the noise, and calibrate oneself amidst the intense pressure of competition is an absolute requirement for success.” Chopra adds, “That a few bold athletes are now speaking openly about the challenges around mental health is inspiring, and as storytellers who pride ourselves on being able to explore human potential, this project and partnership with NBC Sports Regional Networks is not only a great challenge for us, but a really important one we’re incredibly proud to be a part of.”

“This project hits home for me,” said Brandon Marshall. “Through HeadStrong, I hope to use my voice to encourage others to talk openly on this subject.”

The documentary will cover anxiety, depression, addiction and other health issues, and will have “a special focus on the successful stories of diagnosis and treatment that have allowed those facing mental health problems to overcome adversity,” but it’s also going to talk about the systemic challenges out there for athletes and the need for prevention and education programs. HeadStrong follows the Fair Play initiative (youth sports) the regional networks produced in 2018 and the TOMBOY one (girls’ sports) they produced in 2017, both of which were shown on NBCSN and NBC-owned broadcast stations as well as the regional networks.

It’s interesting to see another project led by the grouping of NBC’s regional networks, as that group (rather than just the individual networks) has become more prominent in recent years. Last year, they made a cross-network hire in NBA insider Tom Haberstroh, and they’ve rolled out other cross-network projects such as the MyTeams app, a Rocket League tournament, and more. It’s also interesting to see them partner with Religion of Sports for this, and to see Marshall (someone who’s frequently spoken about his experiences with mental health challenges, including borderline personality disorder) involved as an executive producer. We’ll see how the HeadStrong project turns out, but this is certainly a significant issue, and a topic that’s worth further discussion in the sports world.