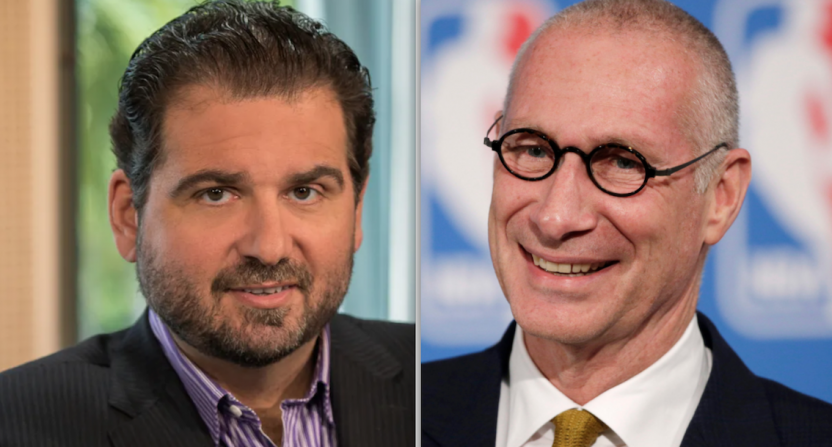 Following the report of former ESPN personality Dan Le Batard reuniting with executive John Skipper for a new media venture, details regarding the direction of this endeavor are coming to light.

According to Front Office Sports’ Michael McCarthy, the intention is for the Le Batard-Skipper project and its content to take a progressive, liberal-leaning angle. This would put the enterprise at odds with the conservative tone and commentary established in recent years by Outkick.

Perhaps signaling where he wants his content to go, Le Batard has been especially outspoken against Outkick founder Clay Travis following the U.S. Capitol riot by Donald Trump supporters (via Barrett Sports Media):

someone has new found freedom i see pic.twitter.com/8dEGGNRxmb

“This is what was wrought,” said Le Batard on his Jan. 7 podcast. “This is what was going to get here because of everything you saw happening over the last 12 months to us and elsewhere because I’ve got something for that shitstain Clay Travis, who wants to sit it out now when he was having Trump on his infomercial podcast, ‘Dixie Vodka cheap s–t,’ just getting Trump to foment this base and then walks away and says, ‘Hey I never said anything about violence.’

“Nah, man, nah. You guys did in all your code. I worried about the subtle guys who could do the Trump shit cause if you were willing to follow that Frankenstein shitbag to where you followed him? That’s what you get yesterday.”

Related: ESPNers, both past and present, react to John Skipper’s resignation

McCarthy reports that Skipper is pursuing talent he used to work with at ESPN, including Jemele Hill, Bomani Jones, and Kate Fagan. Hill confirmed to McCarthy that she has indeed talked to Skipper about a role at the new company.

“‘We’re trying to figure out the most productive way to work together,’ she told Front Office Sports. ‘Both John and Dan know I have such a deep level of respect for them. So me working with them again always felt like it was inevitable.'”

Hill is a provocative media presence who will certainly draw attention to this venture if she’s hired. During the past three years, she generated plenty of controversy for politically-charged remarks about Donald Trump, Jerry Jones, and Nick Saban while at ESPN. Her involvement will surely compel some to avoid the website and the content it eventually produces. But hiring Hill would certainly represent Skipper planting a flag for the endeavor’s tone.

As could be expected, Travis welcomed the challenge of an ideological rival to Outkick presenting itself.

"If Dan Le Batard and his merry band of cronies want to step in and start having a knife fight, if he thinks there's a huge market place for a further left wing version of ESPN… more power to him. If anything it's only going to make OutKick stronger." –@ClayTravis pic.twitter.com/GXfmRmZme8

“I take it as a badge of honor that Outkick is now being used as a template of a sports media company,” said Travis, “even if they’re going in a different direction.”

Acquiring the talent mentioned could be expensive. Yet hiring anybody who will attract attention and move the proverbial needle likely won’t be easy.

Jones recently signed a contract extension with ESPN and Fagan announced she’ll be writing for Sports Illustrated. In addition to her Jemele Hill is Unbothered podcast at Spotify and Stick to Sports talk show with Cari Champion for VICE TV, Hill created her own production company (with The Undefeated’s Kelley L. Carter), Lodge Freeway Media. She also currently writes for The Atlantic.

Latest episode of @JHillUnbothered features the most requested guest in JHIU history — @michaelsmith. He shares the emotional reason he avoided doing this podcast with me.

Here, I ask him the question we’re both asked most often:

And that’s just in front of the camera, on the mic, or “in print.” Numerous producers, directors, editors, and engineers will have to be hired for this new venture. Of course, a whole lot of talent is now available following numerous layoffs at several media outlets, including ESPN.

Then there’s the question of who might lead this venture and oversee its content. According to McCarthy, Skipper has three people in mind for the job, each of whom he previously worked with at ESPN.

Erik Rydholm was the executive producer of Le Batard’s Highly Questionable and the TV simulcast of his radio show. Connor Schell is in the process of leaving ESPN with eyes on launching his own production company. And Jamie Horowitz currently works with Skipper at DAZN following a high-profile dismissal from Fox Sports in which his infamous “pivot to video” initiative significantly set back that company’s digital content.

Potential talent aside, establishing itself as a sports media platform with a progressive view is certainly one way for this Le Batard-Skipper endeavor to stand out from the other content available on the website, podcast, and video landscapes.