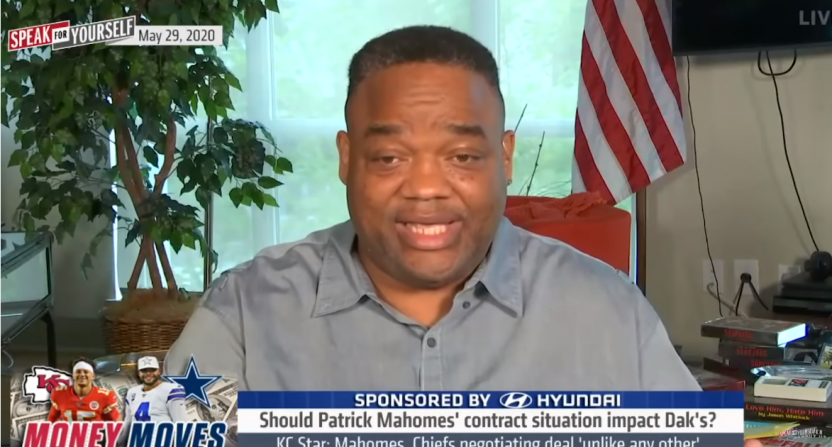 Last June, following a departure from FS1, Jason Whitlock joined Clay Travis’s Outkick the Coverage (now just Outkick) with all of his writing and podcasting branded as “Fearless.” The official release termed it a “partnership agreement” with the Washington Post reporting that Whitlock paid half a million dollars to become a partner in the media venture.

Seven months later, that partnership agreement has ended and Whitlock is leaving Outkick, per Clay Travis, because he “now wishes to carve his own career path as opposed to being a partner at Outkick.”

I’d like to thank @WhitlockJason for his incredible work since June @Outkick. I think he’s the best sports columnist in America & look forward to seeing what he creates in his next chapter. I’m extremely proud of the work we produced together: https://t.co/A3undMxMPt

“As someone who founded and owns his own company, I don’t want to ever stand in the way of any talented person having control of their own future,” said Travis in a post on the site. “So as much as I value Jason’s work, friendship, and the incredible asset that he’s been to Outkick, I’m excited to see what he’s capable of going forward. I’m sure it will be fantastic and I’ll be reading and listening to his work there just as I have read and listened to his work at the Kansas City Star, ESPN, Fox, and Outkick.”

As The Big Lead noted, Whitlock hasn’t created any content for Outkick since December 18. His most recent work was a guest column for The Blaze in which he compared Wednesday’s riot at the U.S. Capitol to a “1950s fraternity panty raid.”

Whitlock hasn’t commented or confirmed the decision to separate from Outkick. He did cryptically tweet cryptically about trusting either reporting about his split with Outkick or his next steps.

Do not believe anything written or said about me unless I say it. All else is Fake News.

Whitlock has been moving away from sports and towards conservative media in recent years, so it will be interesting to see where on the media landscape he lands next. If we do hear anything about Whitlock’s next stop, fake news or otherwise, we’ll add to the story.