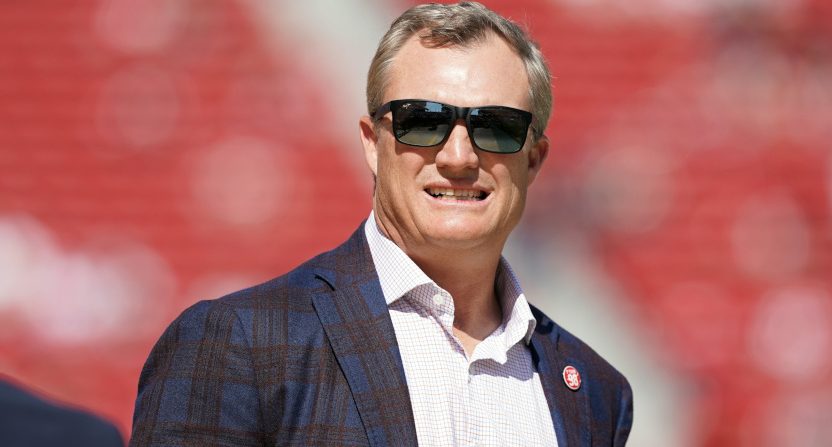 With Amazon launching its exclusive Thursday Night Football broadcasts this fall, this offseason saw a lot of drama about who would form that broadcast booth. Amazon eventually landed on Al Michaels for play-by-play and Kirk Herbstreit for analysis, with those moves becoming official in late March, but there were several other figures mentioned before that on the analyst side in particular. One of those was San Francisco 49ers general manager John Lynch (seen above last October), who worked as a game analyst for Fox from 2008-2016.

Andrew Marchand of The New York Post reported in February that Amazon had had talks with Lynch, and added that they likely offered to triple his 49ers’ salary ($5 million), but noted later that Lynch “quickly shut down talks after one dinner.” Lynch then said in an early-March press conference at the NFL Combine that he stayed because of the opportunity he thinks the 49ers have to compete for a title with their current roster. But he elaborated on that further at the team’s Dwight Clark Legacy Series event last Wednesday, as per David Lombardi of The Athletic, and said the talk he gave to the team after their NFC Championship Game loss to the Los Angeles Rams was a key factor for him:

John Lynch was reportedly offered ~$15m annually to leave 49ers to broadcast for Amazon. He called it a "stupid" amount of money.

Why did Lynch turn it down?

New story — When Kyle Shanahan asked him to address the team after the NFFCG loss, Lynch had a powerful realization ⬇️ pic.twitter.com/3O1fqgd4iu

That fits in with what Lynch said in March, but it’s more specific. Here are the key parts of his March comments, for reference:

“Well, I came to this business because of the opportunity to compete. I think we have a very good team and I think we’ve got an opportunity to get better and I’m into that,” Lynch said. “It’s flattering when people come, especially people whom you respect so much, old friends and whatnot, and show interest. And you listen, but ultimately, I made a decision, my family made a decision that this is where my heart is at right now. And that’s what I’ve always had guide me. So, I’m happy to be here and that’s that.”

…“It is a lot of money though,” Lynch said with a laugh. ‘I can’t believe they’re paying that much for people that talk football. It’s unbelievable.”

Those March remarks do hit on a couple reasons why Amazon has been able to attract such notable names so far. One is obviously the money; we’ve seen huge jumps in NFL commentator salaries thanks to Amazon’s entrance into the market, plus ESPN’s move to grab Troy Aikman and Joe Buck from Fox, CBS’ previous move to lock up Tony Romo, and Fox’s move to lock up Tom Brady in advance. (And it’s worth keeping in mind that Amazon has more revenue streams than your average broadcaster, from their Prime subscription fees to their e-commerce, so high salaries are perhaps easier for them to afford than others.) But Amazon has also put together a team of prominent broadcasting executives, from vice president of global sports video Marie Donoghue (long of ESPN) to executive producer of live sports Mike Muriano (long of NFL Network) and more, so there’s some comfort there for established commentators in at least considering working with a service that’s relatively new to exclusive sports broadcasts.

Lynch’s remarks both in March and last week are also notable for how specific they are that this particular moment was not the time for him to leave. Both times, he’s seemed to keep the possibility of a return to broadcasting in the future open. And that makes some sense; his work as a broadcaster for Fox was well-received, and there are definite advantages to the workload of broadcasting versus running a team. There aren’t likely to be many top analyst jobs open soon unless something unexpected happens, as all of the NFL-carrying networks have now made notable future plans. But those plans can always change, and there are also often open opportunities on the studio side. We’ll see if Lynch winds up exploring the media world again down the road or if he stays in the executive ranks.