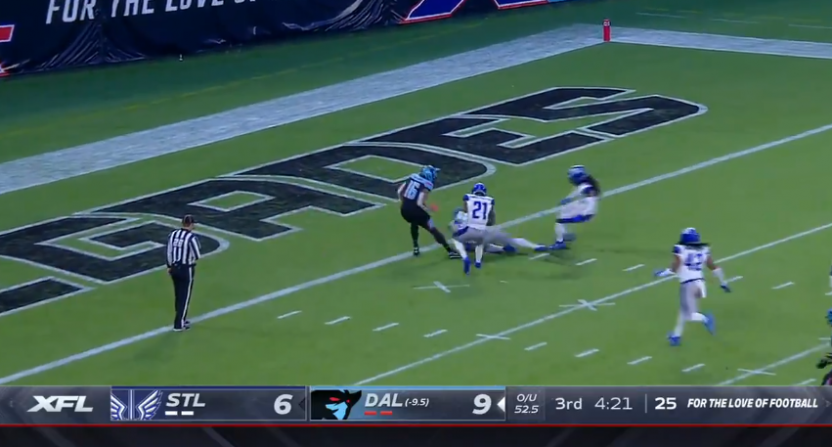 By all accounts, the second incarnation of the XFL was an improvement from the initial version, even if it was met with a similar fate (thanks in part to the COVID-19 pandemic). While the original version introduced football fans to some of the broadcasting innovations we take for granted today, the 2020 version provided fans with a somewhat improved focus on gameplay and a bunch of memorable moments thanks to players and coaches being mic’d up as well as the immediate access given to sideline reporters in-between plays.

One of those sideline reporters was PatMcAfee, who went viral with his reaction to a fantastic punt that was marred by the coverage team’s inability to keep it out of the endzone. McAfee received some praise at the time for his ebullient personality and ability to challenge players and coaches on their decisions right after big plays.

Although McAfee’s work might have been one of the highlights left behind by the short-lived second incarnation (out of three?) of the XFL, it doesn’t sound like it was that fun of an experience for the podcaster. He talked about it on a recent episode of The Pat McAfee Show, saying that the sideline reporter role was “not for him” and that he had been “bamboozled” about the particulars.

I enjoyed watching it on TV during the 2nd run in 2020 but working on the sideline was not for me #PatMcAfeeShowLIVE pic.twitter.com/iEA5QLgMjw

“I’m not trained for this. People go to school for a long time to be good sideline reporters. There’s certain information, there has to be timing, you have to remember certain things. I’m like, this ain’t my fucking thing.”

“Like, this is what you have to do. You have to ask for permission to speak, so we’ll send it to the truck, and the truck will send it there. They’ll give you a yes, then you can talk or whatever. I’m like, okay, that’s not gonna work. That’s just not how it’s going. They’re like, well that’s how this whole thing goes.”

McAfee also discussed the moment when he almost got run over on the sidelines while interviewing Troy Aikman, another viral moment that stands out from the lone season.

I may or may not have almost got @TroyAikman killed #XFL2020 pic.twitter.com/UXwQmdPkew

“I’m like, where am I supposed to stand? They’re like, you can go wherever you want. I was like, okay, you got it. I fucking was, what, five yards behind the line of scrimmage and I heard in my ear ‘GET OFF THE FIELD.'”

While McAfee has dabbled in a lot of roles in sports broadcasting in recent years, it sounds like we can assume sideline reporting will not be something in his future.