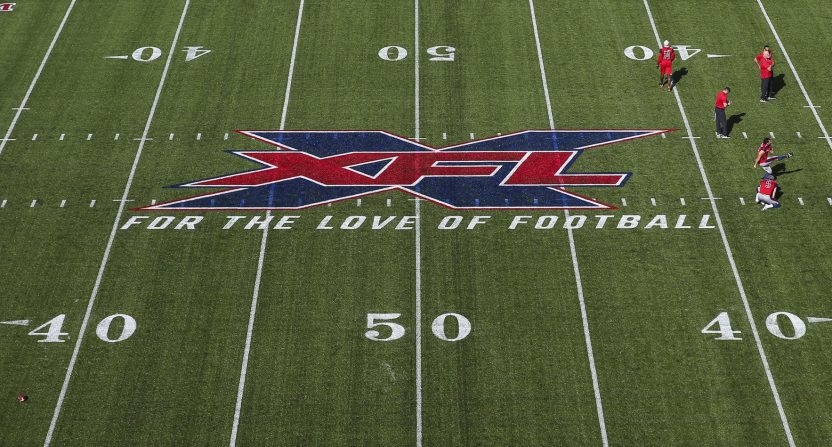 On Thursday, the XFL followed in the footsteps of pretty much every sports league in America and ceased playing. The statement did, however, include a pair of subtle notions that the league isn’t done: the notation of “regular season” games, and the mention of “2021 and future years.”

I’m going to put the idea of the XFL possibly playing postseason games to the side for now. That’s a situation that will be directly related to the spread of the coronavirus in America, and I’m not the person to speculate about that.

However, the XFL’s possible future in 2021 and beyond is worth discussing.

First off, the XFL does appear safe from a TV perspective next year. Last May, when the league announced its TV deals with ESPN and Fox, they were announced as multi-year agreements. The language on those agreements is unclear (naturally), and we’re not sure if they require games on both broadcast and cable, or if ESPN and Fox would be able to move some of their inventory off of broadcasts in the wake of steadily declining viewership during the five weeks of the 2020 season.

But regardless of those declines, the XFL was still drawing a significant amount of viewers. Yeah, 767,000 viewers is down from what the XFL had been drawing, but it’s still a number that Fox would absolutely take, especially in the post-NFL part of its schedule. Similarly, ESPN would be fine with a number on that range on cable – especially on a Sunday, where their last XFL game of the season drew a day-high 833,000 viewers.

Second, I think the XFL did a lot to intrigue viewers and have them ready for a second season. Sure, the on-field play (led by a lack of top-tier quarterbacks, an issue that also plagues the NFL) wasn’t elite, but some of the innovative rule changes and broadcasting decisions were met quite warmly by fans. In a second season, the XFL could build on these changes, learn their lesson from the first five weeks of 2020, and freshen things up for 2021 without having to trudge through a potentially imperfect second half of the season, which we saw in the blown finish to end Week 5’s Seattle-Houston game.

Third, it’s important to note that the XFL season didn’t end because it failed or ran out of money. It ended because of a national emergency and worldwide pandemic that shut everything down. This isn’t an XFL problem, and you can’t point the finger at the league for the season ending. That’s helpful, if only because the national narrative won’t paint the XFL has a money pit and a complete failure, like the original incarnation was (rightfully) dubbed in 2001.

However, the most important thing regarding the future of the XFL has nothing to do with the on-field product: finances. Two years ago, Vince McMahon was reportedly ready to spend $500 million over the XFL’s first three years. A year ago, McMahon sold off $270 million in WWE stock (roughly $84 a share) to help fund the XFL. The tanking stock market has sent WWE’s stock spiraling (and whatever price I quote now will probably be outdated whenever you read this) to less than half of the price McMahon sold it at just a year ago. With so much of McMahon’s net worth tied up in WWE (he still owned roughly 28 million shares of the company last March when he made that $270 million sale), the declining stock price takes McMahon’s fortune down along with it. If needed, would he be willing to sell even more stock, at a lower price, to keep funding the XFL?

Furthermore, how much of that $500 million over three years estimate was based on playing a full season? Without only five weeks of games in the books, the XFL is missing out on a total of 20 regular season games and three playoff games, and you would have expected those playoff games to be played in front of packed houses paying for their seats. All that ticket revenue is gone, and while the league was only averaging 18,500 fans in attendance per game, that’s still a hefty chunk of revenue, especially considering that the league is still doing the right thing and paying its players for the rest of the 2020 season.

Overall, the XFL is in a precarious position. The first five weeks went about as well as anyone could have expected, yet the league was unquestionably trending in the wrong direction over those five weeks. The way this debut season ended, in lockstep with the other sports across the country and the world, does give the XFL something of a mulligan. But there are so many other factors regarding the league’s second year (including the length of the state of emergency surrounding the coronavirus, to the inevitable resumption of the other major sports leagues in America, to even the NFL’s new CBA and the sliding stock market) that we can’t even begin to process what a second year for the XFL would look like. On the bright side for the XFL, McMahon didn’t torpedo the league like he did 19 years ago, and if the XFL doesn’t return, you can’t put all the blame on the league and its decision makers.