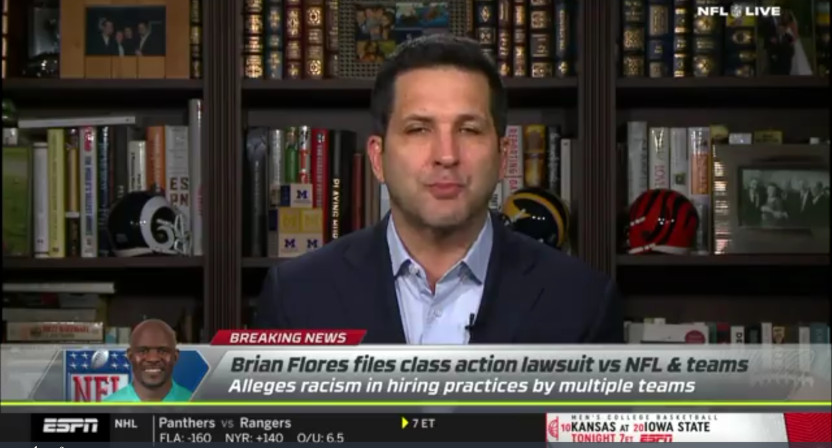 When major news breaks in sports, it’s always interesting to see how various networks cover it. With the discussion of ESPN’s report of Tom Brady’s retirement Saturday and then the various refutations of that at that time (Brady eventually announced Tuesday that he was retiring, a day after disputing ESPN’s report himself, but that doesn’t mean the Saturday report was completely right), ESPN took criticism (including from us) on how their college basketball coverage commitments limited what they could do on the breaking news front. On Tuesday, though, with the major news of former Miami Dolphins’ head coach Brian Flores’ class-action lawsuit against the NFL and its teams, ESPN was the clear winner amongst itself, FS1 and NFL Network in terms of quick and comprehensive on-air coverage of the lawsuit. To start with, here’s how ESPN began covering this with comments from Adam Schefter on NFL Live referencing the key part of this lawsuit on Bill Belichick’s texts, which came not long after Schefter’s first tweet on this (about 35 minutes after people started discussing it on Twitter, including around this tweet from Alex Weprin of The Hollywood Reporter):

Here’s some further NFL Live discussion of this:

And the back half hour of NFL Live was almost specifically about this. Following ESPN show Around The Horn didn’t cover it, but was likely taped ahead of that story breaking, and Pardon The Interruption did get in some commentary of their own. And when it came to the 6 p.m. Eastern SportsCenter, Kevin Neghandi and Elle Duncan also led with that:

And that SportsCenter featured a lot of discussion of this lawsuit. Meanwhile, NFL Network’s block of programming for Tuesday afternoon was listed in the TV guides as a replay of a Cardinals-Rams game, but it was actually a special about Tom Brady after he officially announced his retirement Tuesday morning. That was not interrupted with discussion of this lawsuit. And their NFL Total Access show at 6 p.m. Eastern began with Brady discussion:

They didn’t hit discussion of the lawsuit until 20 minutes into the show, where insider Ian Rapoport (who, in fairness, did tweet about this at 4:18 p.m. ET, two hours before NFL Network got to it on air) came on to talk about it:

And, over at FS1, they were live in studio with Speak For Yourself  for around 75 minutes after this news broke, but didn’t address it there. They then went to scheduled NASCAR and college basketball coverage. That’s not necessarily surprising given FS1’s hard shift away from news over the past half-decade, but it is worth noting; that channel does not appear particularly likely to cover anything late-breaking.

I used to work for @nflnetwork. Let me tell you something that is almost certainly true in the wake of this Flores lawsuit: Assholes are puckered so tightly in that office–& in the league office–that higher-ups will barely be able to function. Watch how timidly they cover this.

This is a small sample size of one event, but it does fit with previous indications that ESPN is better-suited to shift gears to cover breaking news on a weekday than any other cable sports network. And this one is maybe particularly interesting for the extremely limited NFL Network coverage of it. Yes, this isn’t positive news for the NFL, but there’s absolutely a chance that this lawsuit winds up having an effect on the league and its teams. And it’s notable that even NFL rights partners like ESPN went heavily in on covering it. To NFL Network’s credit, they did at least somewhat cover this during Total Access (and, in what’s probably most important for the main way people interact with them in 2022, Rapoport tweeted about this at a similar time to Schefter, and they covered the story online). But ESPN definitely pulled off a more comprehensive quick coverage package. And there’s at least some value to that.