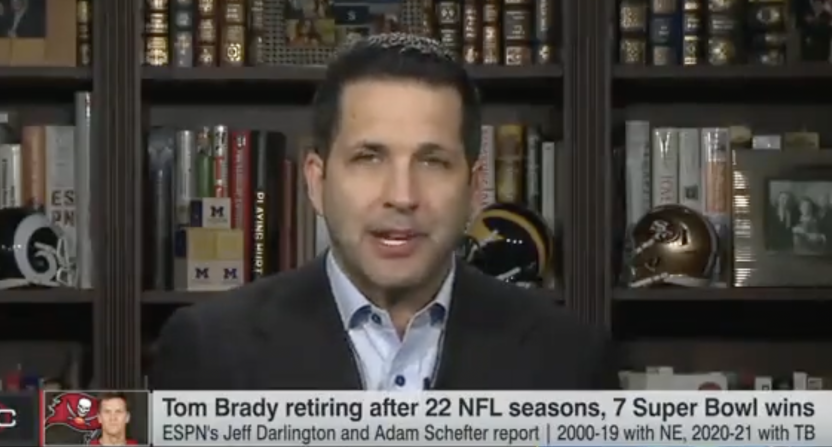 On Saturday, ESPN created a media firestorm when Adam Schefter and Jeff Darlington reported that legendary NFL quarterback Tom Brady was retiring. However, by the time the day was over, the company’s inability to authentically report on the reaction and clarifications that ensued, made the story much more about them.

Schefter and Darlington broke the news at 2:30 p.m. EST, doing so in a way that inferred Brady’s retirement plans were already a done deal and an official announcement could happen at any moment.

Tom Brady is retiring from football after 22 extraordinary seasons, multiple sources tell @JeffDarlington and me.

However, it didn’t take long for everyone around Brady to pump the brakes on the solidness of that information. Tom Brady, Sr. told reporters that his son had not decided to retire. Tampa Bay Buccaneers coach Bruce Arians told the Tampa Bay Times’ Rick Stroud that Brady hasn’t told the team that he planned to retire. Stroud then reported that Brady personally called Bucs GM Jason Licht to say that he has not, in fact, made up his mind yet about retirement.

JUST IN: Tom Brady Sr. tells @kron4news that his son is not retiring. Brady Sr. says an online publication started circulating an unsubstantiated rumor. However a number of NFL insiders are now reporting it. @kron4news #TomBrady #NFL

Brady’s agent, Donald Yee, released a statement that further made it clear that, while he didn’t exactly deny the report, Tom was still waiting to make any official announcement.

“I understand the advance speculation about Tom’s future,” Yee said in a statement. “Without getting into the accuracy or inaccuracy of what’s being reported, Tom will be the only person to express his plans with complete accuracy. He knows the realities of the football business and planning calendar as well as anybody, so that should be soon.”

By the time all of this information dropped, plenty of people were calling Schefter and Darlington liars or saying that the ESPN reporters got the story wrong.

As many other reporters have said, there is very little chance that Schefter and Darlington were “wrong.” Someone like Adam Schefter doesn’t take the time to prep a social media graphic and then put himself out there with this kind of news if he’s not rock-solid on it (even going way-too-far above and beyond to do so). That’s just not how it works. And say what you want about Schefter but he’s not in the business of taking risks like that.

I'll say this: I can't imagine Schefter and Darlington did not at least get a nod from someone high in Brady's camp.

Not to say that Schefter can’t make mistakes, but they usually come in the form of being too one-sided with the information he’s spoonfed from sources. Many pointed to instances like the Condoleezza Rice/Browns scoop as proof he can get it wrong, but that’s an incorrect reading of what he reported and how his report changed the outcome. And that also appears, to many, like what may have happened here as well.

Brady’s own TB12 Sports Twitter account promoted his retirement when the news broke, before deleting it. Clearly, the plans were in place internally for an announcement to come soon. It just appears that ESPN jumped the gun and phrased the news to sound more imminent than it likely was.

The obvious answer seems to lie in Yee’s statement, in which he says Brady “knows the realities of the football business and planning calendar as well as anybody.” As noted by Spotrac, Brady is days away from receiving a sizable portion of his signing bonus, and if he were to retire before then, he might be putting that in jeopardy. Hence, there’s no way he was going to announce anything before then.

FWIW: $15M of Tom Brady’s $20M signing bonus from last March is set to be paid out February 4th, 2022. Seems like something a guy or gal would want to have process before making any life changing career decisions official.

All of which is to say that, now that all the information seemed to be out there, it would have made a lot of sense for ESPN to start shifting its messaging about the retirement report to reflect the reality of the situation, just as so many other outlets had started doing. There’s no shame in it, especially if the reporting is correct. It happens all the time.

Remember when Chip Towers at the Atlanta Journal-Constitution reported that Georgia DC Dan Lanning was the new coach of the Oregon Ducks and all the local Oregon beat reporters initially said they weren’t hearing the same? The AJC adjusted its report to say that Lanning would be introduced after the weekend and, sure enough, that’s exactly what happened. Towers was correct, the Oregon folks were correct in saying they hadn’t heard anything, and then we learned that Oregon was simply keeping things under wraps locally.

But instead of going with the flow, ESPN put out a statement saying it stands by the reporting but added nothing else.

Statement from ESPN on Tom Brady story: “We stand by our reporting.”

They forgot to send the memo out to some of their on-air hosts as the lack of clarity in that initial report trickled down so that even their own people were talking about Brady as if he had already retired.

…this did not happen pic.twitter.com/1MFOFGyE29

ESPN eventually did add more to the dialogue when Seth Wickersham, who has covered Tom Brady extensively, posted a piece about Brady’s “pending announcement” and what it all means. However, the article was posted on ESPN+, which means those without a subscription couldn’t read it and get the further context that ESPN’s audience desperately needed to understand their report versus what else was being said. The move smacked of internal interests over clarity and truth, even if Wickersham’s piece wasn’t meant to be that kind of reporting.

Not his decision but putting this behind a paywall is incredibly lame.

ESPN breaks this story. Has no open channel or slot to do any extended coverage because of live games.

Their reporting comes into question and now you have to pay to figure out what the deal is. https://t.co/1fewStoc33

In fact, the only other clarifying report to come out of ESPN on Saturday came from Jenna Laine, their Bucs reporter, who confirmed that Brady called the team to say he “hasn’t made a decision on retirement.”

Confirming reports that Tom Brady called GM Jason Licht today to tell him he hasn’t made a decision on retirement. That’s in addition to Bruce Arians telling me Brady said he “wasn’t close.”

Keep in mind though: athletes like to be in control of their stories and their narrative

She added a caveat that “athletes like to be in control of their stories and their narrative” seemingly as a way to bridge the gap when that development and the initial report. And while that’s probably true, especially with someone like Brady, it seemed like that kind of messaging needed to be amplified by ESPN.

Sunday, Schefter appeared on ESPN programming to discuss his report. The company is clearly sticking to its guns, noting it as if Brady has decided to retire on their graphics and crawl even as the reporter offers up clarifications and caveats.

ESPN’s reporting entering day two of Tom Brady is probably, we are pretty sure, has to be, oh ffs why hasn’t he said it yet retiring? pic.twitter.com/7HaSmVJ3Pk

That, in a nutshell, is the issue for ESPN. Even as Schefter adds all of the relevant information that is necessary to the story, but doesn’t completely undercut it, they still feel the need to save face and present it as they originally said. It would be completely fine, and probably more accurate, to add a “reportedly” or “per sources” to that crawl and it would solve so many concerns. But no.

Credit due, they have updated the article on their website with all of the pertinent updates, and they do use “Sources” on the homepage and in the article as a clarifying inclusion. It’s the least they could do, of course, but it’s something.

Smart money says that, in the end, Schefter and Darlington are correct and that Brady is going to retire. That’s not the issue (unless Brady does pull a spite-comeback, which does sound like something he might consider). The issue is that the way ESPN reported such an important story and refused to properly acknowledge the nuances that came up in the hours afterward, undercutting the journalistic integrity involved.