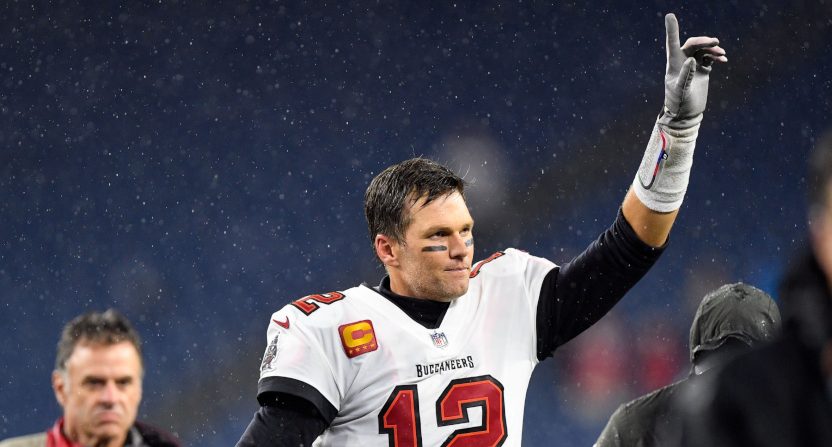 A big part of why ESPN pays so much money for Adam Schefter to serve as their “NFL insider,” and is so willing to ignore the various controversies he winds up in, is that he’s very rarely wrong on factual information. Yes, absolutely, Schefter can be questioned on ethics and on certain areas of emphasis in his reporting, but it’s very unusual for something he reports to be provable as flat-out wrong. However, his report (with ESPN colleague Jeff Darlington) Saturday that “Tom Brady is retiring from football” has come under much more refutation than anything he usually puts out. And some of that comes from Brady’s father, in comments to Kylen Mills of Bay Area MyNetworkTV affiliate KRON4:

JUST IN: Tom Brady Sr. tells @kron4news that his son is not retiring. Brady Sr. says an online publication started circulating an unsubstantiated rumor. However a number of NFL insiders are now reporting it. @kron4news #TomBrady #NFL

That particular comment is funny, because what’s the “online publication” here, ESPN? They’re a little bit more than that. And yes, there was some talk about a potential retirement from Brady (seen above in October) before the Darlington/Schefter ESPN report, especially from CBS Sports’ Jason La Canfora, but his piece Friday was still heavily caveated as “Tom Brady retirement decision imminent.” (And referring to CBS as an “online publication” is just as absurd as calling ESPN that.) However, this does appear to fit in with other comments disputing this, including on how Brady did not tell Bucs’ general manager Jason Licht or coach Bruce Arians he was retiring:

Pump the brakes for a bit.
Tom Brady has not informed the Bucs of his plans to retire. “No, he hasn’t that we know of,” Bruce Arians told me. “Agent (Donald Yee) just told us he hasn’t made up his mind.” https://t.co/1pb7AC4U45

Report for @BallySports: Tom Brady contacted @Buccaneers GM Jason Licht and told him he has not yet made a final decision on retirement, disputing the ESPN report. Licht is respecting Brady's process and waiting for a definitive answer, whenever it comes, from the QB.

Tom Brady called the Bucs late this afternoon to inform them he's not even close to making a decision about retirement, according to a source.

Breaking: Two AP sources say that Tom Brady called the Buccaneers' general manager after reports of his retirement and told the team that he has not made up his mind about whether to play again. https://t.co/tLL3u2SVL8

And it’s funny that Brady’s own company tweeted about this and later deleted the tweet:

It’s also notable that, as Michael Ginnitti of Spotrac relayed, Brady appears to have significant economic incentives to delay a retirement announcement:

FWIW: $15M of Tom Brady’s $20M signing bonus from last March is set to be paid out February 4th, 2022. Seems like something a guy or gal would want to have process before making any life changing career decisions official.

But ESPN added this, as per Kyle Koster of The Big Lead:

Statement from ESPN on Tom Brady story: “We stand by our reporting.”

We’ll see if this does actually wind up leading to a retirement or not. At the moment, the odds certainly seem to be in favor of a retirement, just maybe not at this precise moment. But nothing is certain here, and it’s certainly interesting that a report from Schefter is being this heavily disputed. It will definitely be interesting to see if Brady does in fact retire this offseason, or if this report was actually incredibly wrong.