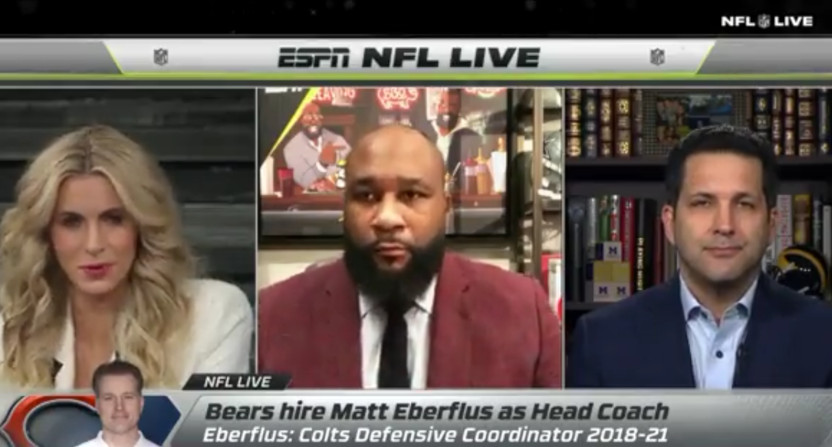 A recurring thing with ESPN “insiders” appearing on studio shows is them responding to texts or taking calls while on air, with NFL insider Adam Schefter particularly known for that. Schefter did that again Thursday on NFL Live, taking a call on air and telling his source “Hey, just on air right now, let me call you back” while Marcus Spears was talking:

If you’re going leak info to Adam Schefter, have the decency to at least turn on ESPN and see if he’s on the air. pic.twitter.com/OT2frkFCar

In fairness to Schefter (seen at right in the clip at top), this particular issue doesn’t appear to be all on him. The first reaction watching this clip from this corner is “Why would the production team not mute Schefter?”, especially with each of these three panelists being in a different location (so there are separate video and audio feeds for each participant, and there shouldn’t be anything from them caught on others’ mics). He wasn’t on camera at this point, with them going to a close-up on Spears, and it seems at least somewhat odd that the default procedure there isn’t “mute everyone offscreen”; most Zoom and equivalent calls have that figured out at this point. (And maybe that is a regular procedure that just failed for some reason in this instance; Schefter’s comments here certainly sound like he thinks he’s not currently on air.) This particular case could have been handled with no one outside ESPN’s studios knowing Schefter took a call with a judicious mute.

But there’s a larger point to discuss here, especially with the on-air calls and texts being a recurring thing for Schefter. There’s at least an argument that ESPN is just fine with him taking calls or responding to texts while on air, given how often we’ve seen that, and there’s an argument for that. Live viewing of whatever ESPN program Schefter is currently appearing on, from NFL Live to SportsCenter to Sunday NFL Countdown and Monday Night Countdown, is quite likely not the way most people interact with his overall ESPN presence: that would be through his Twitter account (nine million followers), or notes from the main ESPN and SportsCenter Twitter accounts (38.8 and 39.3 million followers, respectively), or even just with the “ESPN’s Adam Schefter reports” on the on-screen Bottom Line ticker and in ESPN.com stories.

It seems like the most valuable thing for ESPN with Schefter is for him to break stories. And if doing that occasionally leads to some “bad TV,” it’s easy to see them taking that tradeoff considering the much smaller number of people watching whatever show that is. Granted, it certainly seems possible that Schefter could break as many stories, or close to as many, without taking calls or responding to texts on the air; many other reporters find that balance and do their reporting when they’re off-camera. But the priority here does seem to be the stories over the TV, and that makes some sense considering the audiences for each.  (And it’s also worth noting here that this tends not to lead to that negative of a discussion for ESPN or for Schefter, with most commentary on it tending to be “Look how hard he’s working!” and “Look how many scoops he gets!” rather than “Why is he taking a call on the air?”)

And there’s a wider angle to consider with ESPN, especially at this point in time. It feels like the studio shows on ESPN’s linear channels used to have much more importance to the overall company than they currently do. There’s still an audience for them, and they still have value, but it’s worth keeping in mind that they are not the primary way that many people are interacting with ESPN on a day-to-day basis. And it sure feels like ESPN will sometimes take wins in those other areas over prioritizing what’s specifically best for the given TV show on at a certain moment. Schefter’s phone calls are far from the only thing there, but they are an interesting case in point of how his ESPN role is about much more than just what he says on their studio programming. (But with better use of a mute button, the conflict might not be quite as glaring.)