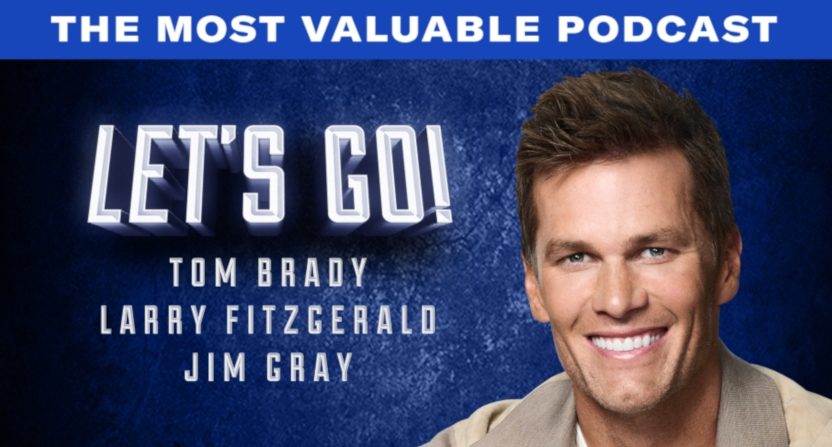 The report Saturday from ESPN’s Jeff Darlington and Adam Schefter that Tampa Bay Buccaneers’ quarterback Tom Brady was retiring led to a lot of shifts to congratulations (including one from Brady’s own company on Twitter) and discussion of his place in history, but it then saw pushback from Bucs’ coach Bruce Arians, Bucs’ GM Jason Licht, and Brady’s father. Brady could still retire this offseason (perhaps after Feb. 4, when $15 million of his signing bonus from last year is set to be paid to him), which would make ESPN’s reporting look better. But on Monday’s latest edition of his weekly Let’s Go! SiriusXM show and podcast with Jim Gray and Larry Fitzgerald, Brady said (in his first public comments since Saturday’s report) that he hasn’t firmly decided one way or the other yet. Here’s more on that from NFL.com’s Grant Gorton:

“I’m still going through the process that I said I was going through,” Brady said. “Sometimes it takes some time to really evaluate how you feel, what you want to do and I think when the time is right I’ll be ready to make a decision one way or the other.”

Sports Illustrated‘s Jimmy Traina offered some further quotes from Brady on this show:

More Brady on SiriusXM: "I was trying to enjoy a nice weekend. It didn't quite turn out that way because my phone got really busy. But that's just part of being in the situation I'm in."

That’s maybe a bit of a shot at Schefter and Darlington, but the “I totally understand that” dials it down a bit. In any case, it is certainly interesting to hear Brady say that he has not yet made an actual decision. And, if that is true, the Schefter/Darlington report is wrong even if Brady does eventually land on retirement; Schefter’s tweet of “is retiring” and the language in the Darlington/Schefter story of ” is retiring” and “Brady’s decision to retire” both are decisive that the decision has been made. (It’s “sources say,” but even if the error is with the source, ESPN takes on that source’s credibility when they find their comments worth running anonymously.)

There is, however, the alternate possibility where the Schefter/Darlington reporting is correct. In that case, Brady has already decided on retirement, is waiting to make the announcement at a better time (and probably on of his media or social media platforms rather than through an ESPN story he didn’t even comment for), and is only saying “I haven’t decided yet” to hold this for his preferred kind of announcement. Without being in Brady’s head, or having him actually tell you he’s decided, it’s tough to prove that.

What does Brady mean by “the process that I said I was going through”? Well, he talked about that in last Monday’s edition of this SiriusXM show with Gray and Fitzgerald:

Tom Brady on his Let’s Go podcast about his wife and family and football. “It pains her to see me get hit out there.  And she deserves what she needs from me as a husband and my kids deserve what they need from me as a dad.

“I said this a few years ago, it's what relationships are all about.  It's not always what I want.  It's what we want as a family.  And I'm gonna spend a lot of time with them and figure out in the future what's next.”

Tom Brady on Let’s Go pod “Playing football I get so much joy from.  I love it.  But not playing football, there's a lot of joy in that for me also now, too, with my kids getting older and seeing them develop and grow.  So all these things need to be considered and they will be.

Note that Stroud, a long-time Tampa Bay Times reporter, properly credited this show. That’s something that ESPN did not do when using quotes from it earlier this year, which Brady called them out on. So Brady’s dynamic with ESPN’s reporting/news side had issues before even this. (However, he is in business with them on the content side, as his Religion of Sports docuseries Man In The Arena airs on ESPN+.)

At any rate, Brady’s show Monday did provide one important piece of information about his future. It looks like he, Fitzgerald, and Gray will do another season of Let’s Go:

Tom Brady did make one announcement tonight. He said he will continue to do his SiriusXM radio show, "Let's Go" next season.

"We got a great thing going, let's keep it going."

So at least we know that part. And we can wait to see when Brady does announce what his playing future holds.