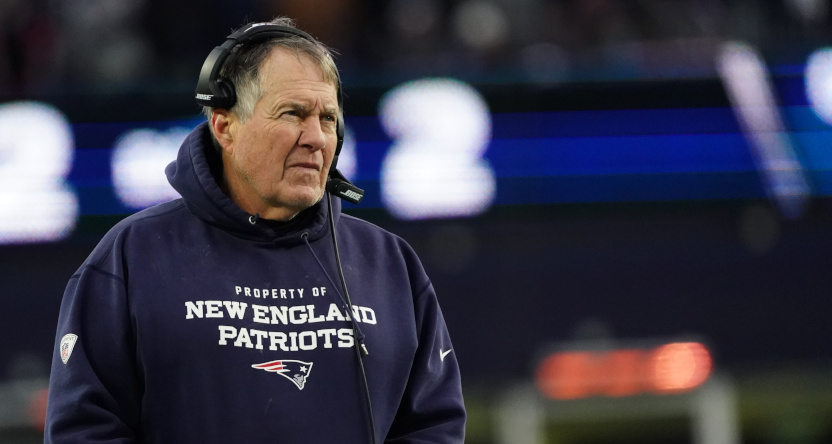 Brian Flores’ class-action lawsuit filed against the NFL and its teams (particularly naming the New York Giants, Denver Broncos, and Miami Dolphins) Tuesday is quite a read, alleging racism in hiring practices from multiple NFL teams. And it has plenty of significant allegations against all of those named teams. (The Giants and the NFL have put out denials.) But one of the most interesting and explosive is the inclusion of texts from New England Patriots’ head coach Bill Belichick on Monday, Jan. 24, which the lawsuit (which comes from Wigdor LLP, whose previous cases include representing Harvey Weinstein victims and former Fox News employees in high-profile discrimination proceedings) cites as proof Belichick was trying to congratulate Brian Daboll (and texted Flores by mistake) on getting the New York Giants’ head coaching job. Here are those texts (from the lawsuit): 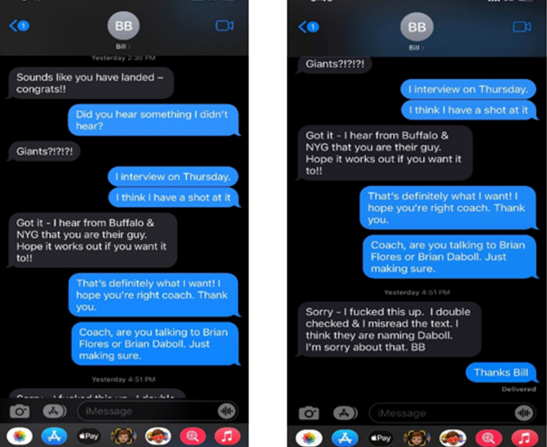 In those texts, Belichick (seen at top during a Dec. 26 game) says “I hear from Buffalo and NYG that you are their guy.” If true, that’s remarkable, considering that these texts were sent on Monday, Jan. 24, a day before Daboll’s in-person interview and three days before Flores’ interview. (As per the Giants’ post when Daboll was officially announced on Jan. 29, he interviewed with them via video conference on Jan. 21, then did an in-person interview on Jan. 25 after his Bills were eliminated from the playoffs.) And Flores’ lawsuit considers that to be essential; one quoted line from Belichick (after Flores tells him he’s texting Brian Flores, not Brian Daboll) is the first line of the lawsuit, “Sorry – I fucked this up. I double checked and misread the text. I think they are naming Brian Daboll. I’m sorry about that. BB.” And here’s what the lawsuit later says about what they think the Belichick texts show:

“The Giants would likely have gotten away with this most insidious form of discrimination if New England Patriots Coach Bill Belichick had not mistakenly disclosed it to Mr. Flores in the below text messages. …Just hours later Mr. Flores learned that the Giants’ continued courtship was nothing more than a discriminatory façade designed to show false compliance with the Rooney Rule.  Indeed, on January 24, 2022, at 2:30 p.m., Mr. Flores received a text message from New England Patriots Head Coach, Bill Belichick—clearly an insider and privy to non-public information from direct sources. The ensuing text messages from Mr. Belichick to Mr. Flores speak for themselves.

…Clearly, by midday Monday, January 24, 2022, the Giants had already decided to hire Mr. Daboll and communicated the decision to third-parties, including to Mr. Belichick. But for Mr. Belichick’s error, Mr. Flores never would have known of this fact. This revelation not only impugns and viciously exposes the sham process to which Mr. Flores was subjected but also stands to indict the Giants’ organizational hiring practices in general. “

It’s quite fascinating that the New England Patriots’ coach would find out about a made decision this early, especially with it not being one of his assistants who was hired. And, in fact, none of his assistants were interviewed for this job; offensive coordinator Josh McDaniels wound up taking the head job with the Raiders, but wasn’t interviewed by the Giants. Yes, Belichick obviously has a wide network of people who talk to him throughout the NFL from his 36 years in that league so far, and he coached with the Giants from 1979-90, but it’s still remarkable that a current opposing coach might find out about a made decision days before interviews were set to be wrapped up (including a second interview with the leading candidate).

Of course, some of the counterargument here (and potentially part of the NFL’s defense to this suit) is that this wasn’t actually a made decision at this point despite Belichick’s texts. The timing of when a decision is actually made matters (as we discussed with ESPN’s Tom Brady coverage). And while a team viewing one candidate as a frontrunner before completing all interviews is still perhaps problematic, especially with the context of the NFL’s extremely limited recent hiring of minority head coaches and the context of its “Rooney Rule” of having to interview at least one minority candidate to avoid a fine, seeing someone as a frontrunner appears less actionable than “he has the job.”

And the specific language of Belichick’s text is notable: “I hear from Buffalo and NYG that you are their guy.” There’s a lot unsaid there: who specifically did he hear from,  and how firm was the “he is our guy” (was it “We’re hiring him” or “He’s the leading candidate”?)?  As noted with the ESPN/Brady piece, the levels of remove here add to the challenges here too; this is Belichick paraphrasing rather than directly quoting something he heard from multiple other people.

If this lawsuit does actually advance to depositions, and if Belichick is deposed for it, that may be fascinating. Most of what we see around refusal to identify sources in court proceedings is around reporters, which comes with arguments about First Amendment protections, shield laws, and the interests of the public. None of that would appear to apply to Belichick; in 2001, the Department of Justice declined to intervene on behalf of an unpublished author because they didn’t consider her a journalist, so it certainly seems a NFL coach isn’t meeting that bar. And this information would appear to come with both of the necessary factors to compel disclosure of a source in civil proceedings, “a particularly strong need for the privileged information” and “an inability to obtain the information from another source ” (unless, of course, in depositions of Giants’ and Bills’ staffers, it comes out who texted Belichick).

There are maybe some arguments Belichick might make to avoid disclosure, including that disclosure here might interfere with the contracts of those who talked to him, but it’s unclear how successful that might be. It is also possible that he discloses those identities to the court, but that they’re never released publicly. But there’s at least a chance that this could lead to the public revelation of who in the Giants’ and Bills’ organizations is talking to Bill Belichick, and that might be pretty interesting. And it sure seems like the arguments about what Belichick knew are going to be a big part of this lawsuit if it does advance.

It should be noted that even if Belichick’s texts don’t wind up being found damning in civil court, they’ve already been found damning by much of the court of public opinion. And that’s especially true given the entire context here of the NFL’s poor recent record on minority coaching hires, given the numerous past floutings of the Rooney Rule with token interviews and no punishement, and given the entire context of the many other allegations about NFL teams’ behavior Flores makes in the lawsuit. With all that under consideration, Belichick’s texts to the wrong Brian to tell him the other Brian got the job three days ahead of his own interview are at least an awful look for Belichick and the Giants. But they might wind up proving more damaging still than that.