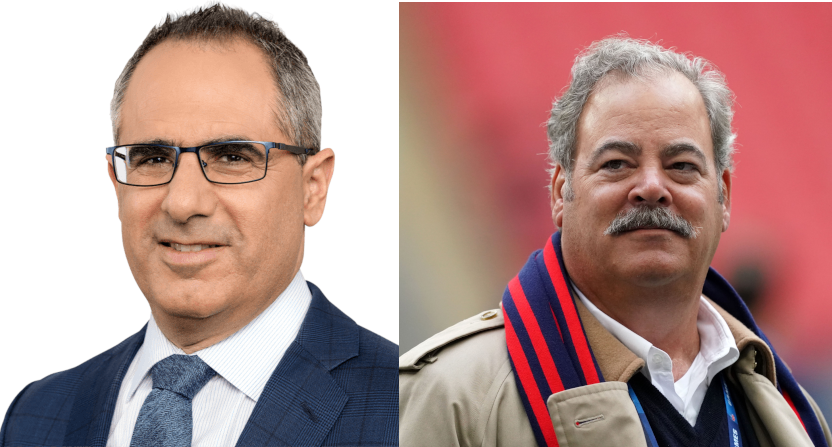 Twitter announcements of people moving on from a job for one reason or another happen quite a bit, and they sometimes happen without a full next destination being announced. But it’s certainly remarkable to a writer make that announcement on the same day they drop a major story elsewhere. That’s what happened with Mike Silver (seen at left above) Tuesday; he put out a tweet saying he was moving on from NFL Network and NFL.com after eight years there, and would be doing some work with Bally Sports and would have more to announce later. Six minutes after that, Bally ran a piece from him reporting Houston Texans’ chairman and CEO Cal McNair (seen at right above) referencing COVID-19 as the “China virus” at the team’s golf tournament this May.

A career update, for those of you who've asked (and for those who haven't): I'm no longer at NFL Network. I had a highly enjoyable eight years there, and I'll miss many of my colleagues. I'm currently doing some work with @BallySports, and I'll have more announcements soon…

Texans chairman Cal McNair used an anti-Asian slur at a team golf event that caused many in the audience to gasp.

Here’s more from that story:

McNair, addressing more than 100 attendees at the Houston Texans Foundation Charity Golf Classic at River Oaks Country Club, spoke into a microphone just outside the pro shop as participants gathered in their carts before leaving to tee off via a shotgun-start format.

At the end of his brief remarks, according to two witnesses who asked to remain anonymous, McNair – whose family has owned the Texans since they were founded in 1999 – told the crowd, “I’m sorry that we couldn’t get together last year, because of the China Virus.”

As McNair and his wife, Hannah, looked on smirking, some audience members were stunned by the reference to the COVID-19 virus, which had forced the 2020 tournament’s cancellation.

“Everyone gasped,” one witness said, “especially the people directly across from him. He and Hannah seemed to think it was hilarious. It was dead silent.”

And here’s the statement McNair gave to Bally Sports Tuesday, through a team spokesperson:

In a statement to Bally Sports via a Texans spokesperson Tuesday, Cal McNair expressed contrition for the remark.

“My comments at the event last May included an inappropriate choice of words,” McNair said in the statement. “I immediately apologized to people who approached me then and I apologize again now. I know how important it is to choose my words carefully. I would never want to offend anyone.”

While the “China virus” label has been used by quite a few people, especially former U.S. president Donald Trump and many people around him, it’s a term that’s drawn a lot of criticism and has been blamed as a factor in the increase of anti-Asian violence and crime (as per FBI data updated this week , anti-Asian hate crimes rose 73 percent in the U.S. in 2020). It’s absolutely not something you want a NFL chairman and CEO saying (which even McNair admits in that statement), especially at a time where the league’s dealing with several other image crises based on executives’ comments. And it’s notable that this was not in a private conversation with one or two people, but in a public address at the team’s charity golf tournament.

From a media perspective, it’s also fascinating that this ran at Bally Sports, that it ran five months after the incident, and that it ran on the same day as Silver announcing he was leaving NFL Network. The most remarkable part of that may be the five-month lag, especially as this was to a crowd of “more than 100” at the team’s charity golf tournament. Any sort of notable remarks from an organizational figure at a golf tournament tend to get spread, and there were plenty of notable figures there; beyond McNair, the team’s own website has quotes from team president Greg Grissom, GM Nick Caserio, and head coach David Culley, and it mentions that other coaches and players took part. And Caserio even did a press session. So there were definitely media members in attendance at the tournament overall, even if that doesn’t definitively indicate who else heard McNair’s comment here.

The other part of it that many will certainly be asking about is if this running now at Bally Sports, and doing so after Silver’s announcement of his exit from NFL Network, indicates that he tried to report this at NFL Network and/or NFL.com and was unable to. There also may be questions on if this  played a role in Silver’s exit from that company. To be clear, we currently have no specific information on that. But the timing of this makes that a fair question. And if anyone at NFLN or NFL.com did block this story, which is definitely notable and newsworthy, that raises questions about the level of coverage of the league the league-owned media side can provide.

As for Silver, he definitely got a notable scoop here. And it’s interesting to see him doing work for Bally Sports (which has its digital news side led by vice president of digital sports news Dave Morgan, who was a Yahoo News and Yahoo Sports executive during Silver’s time at that company, and who has already brought several other notable ex-Yahoo figures on board). And it will be worth keeping an eye on what else Silver does with Bally, and what other work he has to announce in the days ahead.