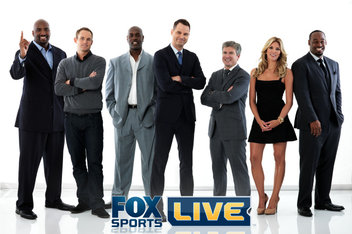 Fox Sports Live is dead. It’s kicked the bucket, shuffled off this mortal coil, run down the curtain and joined the bleeding choir invisible. Some may say it’s just pining for the fjords, as the show’s still airing for now and is on Fox’s schedule through at least next Tuesday, and it could even potentially continue with the same name, but there’s no reason to doubt Richard Deitsch’s report that Fox “is ending Fox Sports Live as viewers know it now.”

However, this change wasn’t all about ratings, and certainly wasn’t about recent ratings: a source tells Awful Announcing that this has been in the works for months. The key remaining question is if whatever’s next will actually be a step up for Fox from a critical viewpoint and/or a ratings viewpoint.

First, it’s worth noting that while this is disappointing on some levels, this decision can’t be fully judged until we see what’s next. “Ending Fox Sports Live as viewers know it now” certainly sounds drastic, but the company has already essentially done that once. Fox Sports Live is currently a highlights show, frequently featuring witty banter and back-and-forths between Canadian anchors Jay Onrait and Dan O’Toole (similar to what they did on TSN’s SportsCentre for years, which prompted The Wall Street Journal to ask in 2012 “Why Can’t We Have Canada’s SportsCentre?” Guess what; you got it!), plus the anchors interviewing various sport-specific analysts, and various recurring segments and running jokes (“This Week In Awkward Bro Greetings,” “Ya Blew It,” jabs at Mike Francesa, etc). It’s ESPN’s original SportsCenter formula, but with more comedy and personality than the standard SportsCenters often feature these days (in some ways, it’s a callback to the Keith Olbermann-Dan Patrick era), and it makes for a highly-watchable show even for those of us who already know most of the sports news and highlights. Cancelling that undoubtedly seems bad. Still, it’s worth remembering that Fox only got there after “ending Fox Sports Live as viewers know it now.”

The initial version of Fox Sports Live was partly the Onrait-and-O’Toole-focused funny highlights show, but it was also interspersed with a weird athlete panel where the likes of Andy Roddick and Donovan McNabb were asked to analyze other sports than the ones they played. While cross-sport analysis may have sounded interesting in theory (and brought back memories of  The Best Damn Sports Show, which many at Fox seem to be constantly trying to recreate), it was dull in practice, with the athletes generally demonstrating a lack of knowledge and credibility when it came to other sports. As ESPN later proved with 2014’s World Cup Tonight (and Fox did as well with some of their 2015 Women’s World Cup coverage), casual sports discussion isn’t a bad thing, but it was poorly executed on Fox Sports Live and poorly shoehorned into what was otherwise a solid highlights show.

Fox started to move away from the panel over time, and the eventual and final end of it came around Roddick’s exit last August (cited as due to FSL’s “new direction focusing on highlights and breaking news“). The panel-less show drew significant praise, as it deserved to. Here’s what AA’s Matt Yoder wrote about FSL around FS1’s two-year anniversary last August:

Fox Sports Live is a much better show now than it was 12 months ago or 24 months ago.  Ratings have improved for the program and the format has improved as well.  The clunky, awkward athlete panel with Gary Payton trying to compare LeBron James to Usain Bolt is thankfully a thing of the past.  The segments are much more focused and the show plays to the strenghts of its contributors instead of its weaknesses.

Onrait and O’Toole seem to have liked the changes, too. One of their podcasts mentions how their new show is like their old Canadian show, and in a November Reddit AMA, Onrait said the same thing:

One problem, though, was that even the new and improved (from a critical perspective) version never drew a massive audience as a standalone show. It did very well following big sports events, such as Fox’s MLB postseason coverage or UFC coverage, so that suggests it was certainly capable of retaining viewers, but one big issue was drawing them there when there wasn’t a compelling live event. Deitsch reported that first-run Fox Sports Live shows were averaging 87,000 viewers throughout January, which isn’t terrible, but certainly isn’t great. According to AA’s source, those ratings weren’t the reason for FSL’s cancellation, but they still probably aren’t what the network would like to see.

Part of the issue is that (perhaps in response to FSL) ESPN has been implanting a little more personality into its own highlights shows. This has been most notable with the midnight Sportscenter branded around Scott Van Pelt, but it’s also been seen with other versions such as Lindsey Czarniak’s solo shows, the live-from-Los Angeles edition hosted by Neil Everett and Stan Verrett, and the frequent pairing of John Buccigross and Steve Levy. Van Pelt’s Sportscenter is the biggest departure from the norm, and while its overall ratings have been largely flat (albeit with streaming and digital boosts), it’s helped to show that the Worldwide Leader has anchors willing to show off their personalities too. Fox’s version is still distinct and still more comedy-focused, but it’s not the only game in town these days, and that may be part of why FS1 is looking to evolve here.

What are they going to evolve Fox Sports Live into? Well, that’s the key question, and the one that is really going to determine if this move is a good one or not. We know that Onrait and O’Toole are under contract through 2017 (they announced on a July 2 podcast that they’d just signed new deals, and confirmed that later in the year), and it seems likely that they’re going to be part of the move here. In fact, Onrait tweeted Sunday that they’re working on a new show that may be closer to their podcast.

We’ll see how that goes, but a show closer to the podcast certainly would seem to have potential. That podcast has been a very entertaining mix of banter between the anchors and interviews of various guests from the sports world, and that definitely could be a good recipe for solid TV.

Of course, that may not be all that Fox is going for here; with Jamie Horowitz in charge, the shift towards hot takes has been generally notable, and the FSL replacement may be more like Fox Sports Live: Countdown (a mostly-regrettable take-focused show starring  lightning rods like Clay Travis). Also, Fox is reportedly looking to cut $250 million across its TV and movie staff, so we’ll see if those cuts have an impact. Still, Fox Sports Live’s evolution to this point from a messy panel/highlights hybrid into a smart, focused and personality-driven show suggests that change itself isn’t always bad. We’ll see if this change proves to be as beneficial as the last one was.