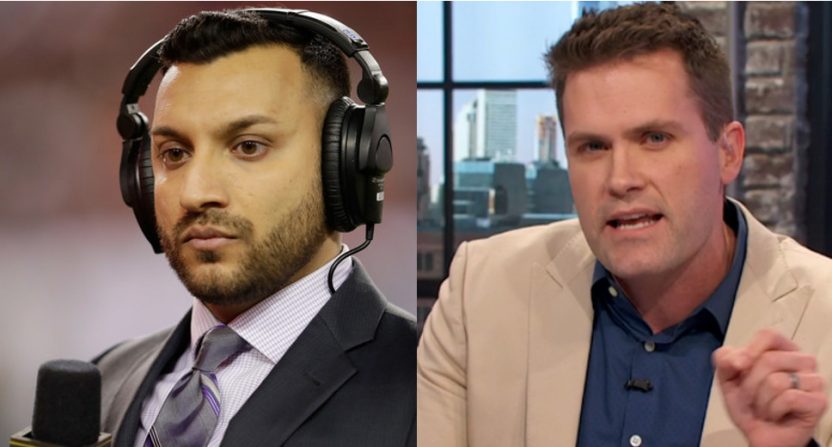 A couple of new national voices will be calling Chicago Bears preseason games this year. That would be ESPN’s Adam Amin (seen at left above), known for his work on national college football, basketball and softball broadcasts (sometimes even after being abandoned by his analyst) as well as others, and NFL Network’s Kyle Brandt (seen at right above), known for his work (and his many extensive analogies) on Good Morning Football (plus his previous stints on everything from The Real World to Days of Our Lives to The Jim Rome Show). They’ll replace Sam Rosen, the NFL on Fox and New York Rangers’ broadcaster who had held the Bears’ preseason play-by-play job for the last nine years.

The Bears have five preseason games this year, with the first being the nationally-televised Hall of Fame Game; Amin will then call games two through four alongside returning analyst (and former Bears’ quarterback) Jim Miller (who’s returning for his seventh season), with Brandt filling in on the fifth game (when Amin has college football responsibilities). Bears’ VP Scott Hagel told Phil Rosenthal of The Chicago Tribune that they were excited to land Amin given his energy and his local connections:

“Sam Rosen was awesome for us and he’s a pro’s pro and gave us the big Fox feel, but we said, ‘Let’s see what options might be out there, especially looking locally,’ ” Scott Hagel, the Bears’ senior vice president for marketing and communications, said Thursday, ahead of a formal announcement by the team.

“Amin’s name came up. Watching his stuff and knowing that he’s a Chicago guy, we got really excited. So we took a look to see if he might be available, knowing there might be some conflicts because he calls a ton of college football. But we were able to get him for three games and we think he’s going to add some juice to our booth.”

Meanwhile, Brandt will bring a different approach to the fifth game, with his job described by Rosenthal as “a hybrid role that combines play-by-play duties with that of a discussion leader.” He’ll talk with Miller and other former players about roster moves, specific players, the season ahead and more as well as just calling the game.

“We understand the (last) preseason game sometimes can be less desirable (to watch), but we think because we have such a young roster, we have a lot of interesting players and stories to tell,” Hagel said. “We’ve paid attention to what ESPN has done with its national (college football) championship games and its (complementary) coaches’ table on ESPN2, so you’re getting a different experience with guys pointing things out and telling stories.

“We understand a traditionalist might not like it as much, but we feel we still have our radio broadcast (on WBBM-AM 780 and WCFS-FM 105.9), which will have traditional play-by-play.”

That might make some sense, especially for the final game and especially with the team already having four preseason games before that. A storytelling and discussion focus with play-by-play when needed might be more interesting than a standard broadcast of the last preseason game, and Brandt certainly would seem like a good fit for that given his role in leading and guiding discussions on Good Morning Football. At any rate, it’s a different approach, and as Hagel notes, there will still be a more traditional option for those who don’t like it. We’ll see how this goes and if it winds up leading to other teams doing something similar.

The Bears are getting a lot younger here (Rosen is 70, while Brandt is 39 and Amin is 31), and they’re also featuring two people who are getting more and more national notice. And this move is also notable as another stage for Amin and Brandt, who are both people to keep an eye on going forward. Preseason NFL broadcasts are only for a few weeks, but they’ve helped propel many sportscasters’ careers even higher. We’ll see if that happens with these two.