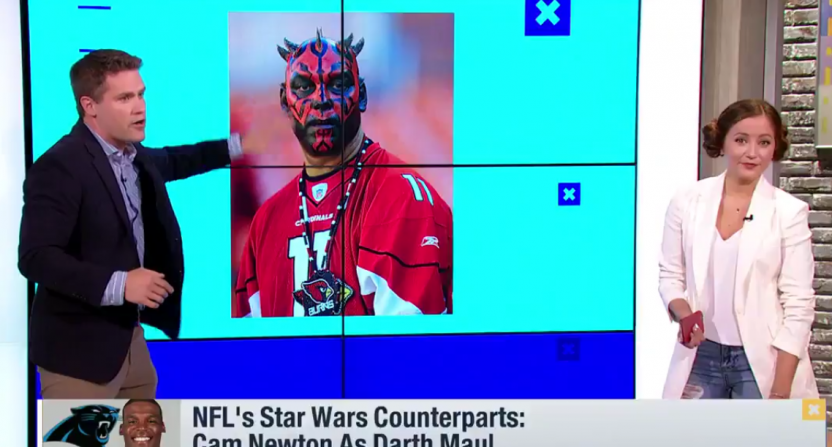 The cast of NFL Network’s Good Morning Football have long been known for elaborate sports and  pop culture analogies, from the Oscars to Chris Berman to Goldeneye, but they may have even topped themselves this time.  On Thursday, plenty of brands celebrated May the fourth with Star Wars references, but GMFB devoted a whole 10-minute segment to comparing various NFL players, coaches and teams to the Star Wars universe. Kyle Brandt went particularly deep with references to plot points in Expanded Universe novels and minor characters like Salacious Crumb, while Kay Adams pulled off the famous Princess Leia hair buns and had some strong analogies of her own:

This was excellent all around. A lot of the May the fourth references by brands felt forced and out of place, but you can tell that Brandt in particular loves his Star Wars, and even non-Star Wars fan Peter Schrager gets into the spirit of things here. (Plus, Nate Burleson’s Lando Calrissian imitation is spot-on.) And it’s not like there’s a lot of incredibly serious NFL talk to be had in the post-draft lull. Why not spend ten minutes discussing how the NFL compares to Star Wars, especially if you can make some funny references like these? Well played by GMFB.

And if they want to revisit it at some point, we have a few suggestions of our own…maybe Belichick as Grand Admiral Thrawn (the master tactician who’s all about getting opponents’ game plans), Philip Rivers as Wedge Antilles (still persevering even when the rest of his squad keeps falling by the wayside), Von Miller as IG-88 (the relentless and hard-hitting assassin droid), and Dak Prescott as Dak (he can take on the whole empire himself, but hopefully his screen time will last a little longer)? In any case, this was great, and an excellent way to have some fun with May the fourth. Hopefully GMFB keeps it up with these offbeat analogies; they certainly make offseason NFL coverage a little more interesting.