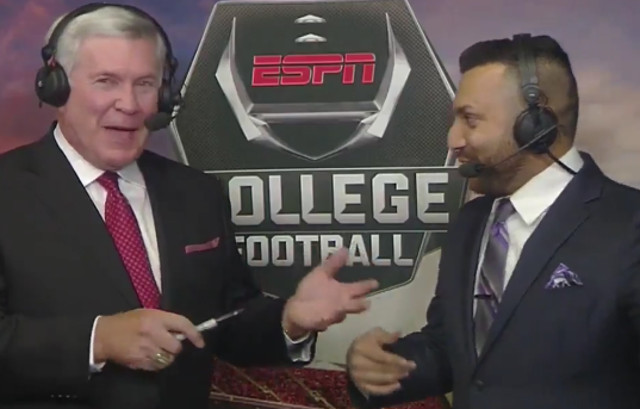 Friday night’s BYU-Toledo game on ESPN2 saw one of the weirdest announcing situations in recent memory. With Toledo up 45-42 and 10:51 left in the fourth quarter, ESPN went to the booth, where play-by-play commentator Adam Amin explained that analyst Mack Brown was leaving early to catch a flight. Here’s video, via @RNs_Funhouse:

I have never, ever seen this before. Mack Brown is doing the game for ESPN, and then… "Alright fellas, LATER!"@awfulannouncing pic.twitter.com/lUob4rTVEl

Amin goes “We’re talking about some games you might want to go see, and apparently Mack’s got to leave us right now, otherwise you’re not going to see this shining face on your TV tomorrow. We’re going to miss you, pal. You sure you don’t want to stick around for the rest of this thing?”

Brown goes “You’ve been working on my voice, so maybe you can be me and you, and Molly can help.” He then adds “I hate to leave the game, but this is going to finish as one of the best games of the year.”

Amin then said “So, Mack departs, and the nation’s fears come to a head. Me and Molly McGrath are going to take you the rest of the way.”

Amin went on to work the rest of the game solo, doing yeoman’s work of filling the void, and he pulled it off remarkably well. Still, Twitter went nuts about Brown’s exit:

Man Mack Brown is going to be surprised when they tell him how this turned out.

Consider me disappointed Mack Brown isn't calling the rest of this game via cell phone from the airport rental car shuttle.

You know what would be cool? Having a coach who won a national title tell us about late game situations here #mackbrown #BYUvsToledo

The snide "You've been working on my voice" comment from Mack Brown has me thinking somebody in the booth pissed him off.

Mack Brown is the guy that leaves the Priesthood Session 10 min early so he can get to Sizzler.

I'm having fun filling in my own obvious commentary for Mack Brown. Ex. after Toledo sacked: "If you're Toledo, u can't take a sack there."

@ESPN's credibility after Mack Brown leaves the broadcast booth during a tie game in the 4th quarter pic.twitter.com/JXEOPQZpDE

When Mack Brown visits BYU, good things happen for the Cougars offense and Mack Brown ends up leaving somewhere earlier than he wants to

Mack Brown was 1 of the broadcasters on BYU game 2nite on ESPN. He left the game early to catch a flight!!#play4quartersMACK

That game had **everything.** I feel bad for anyone who missed the end.

Fun game. Hope somebody lets Mack Brown know how it turned out.

BYU went on to win 55-53 on a last-second field goal after several other crazy plays, but a lot of the talk after this one will be about the weirdness in the announcing booth, not the weirdness on the field.