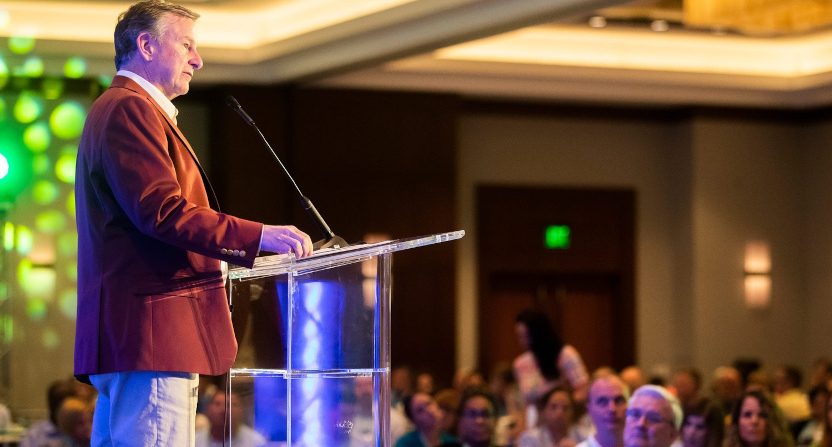 There are always all sorts of discussions around NCAA conference realignment, and proclamations of being “very aggressive” are often heard from conference commissioners, and sometimes from figures at a school currently outside the Power Five. But it’s more unusual to hear that from the president of a school that’s already in a Power Five conference, especially when they’ve granted their rights to that conference through 2036. That’s what Florida State president Richard McCullough did in a speech Saturday (seen above) at the Tallahassee Chamber of Commerce conference, though, saying he’s personally “spending a lot of time” on the Seminoles’ conference affiliation, they’re “getting a lot of help,” and they’re planning to be “very aggressive”:

@PresMcCullough on #FSU conference affiliation: "It's something I'm spending a lot of time on and we're getting a lot of help. We're trying to do anything we can to think about how we remain competitive. Florida State is expected to win. We're going to be very aggressive."

As mentioned above, leaving the ACC would not be particularly easy for Florida State. They, like every other ACC school, have granted their rights to the conference through 2036. That grant originally only ran through 2027, the length of the ACC’s previous TV deal. But a 2016 deal with ESPN to launch the ACC Network (which only launched in 2019) saw the grants of rights extended through 2036. Yes, schools can leave a conference before a grant of rights expires, but doing so is often extremely expensive.

The Seminoles seem quite intent on at least exploring relocation, though. And McCullough’s on-the-record comments at an event certainly add to the rumblings around it. Dustin Lewis of Sports Illustrated/FanNation’s Nole GameDay wrote about this last month, and cited sources saying the Seminoles have met with both the Big Ten and the SEC:

Sources tell NoleGameday that Florida State is in the process of exploring a move to a new conference. The Seminoles have had discussions with the SEC and Big Ten since last summer. Both conferences have displayed an interest in adding the university to their group of current members, along with other schools in the ACC.

The SEC is trying to do whatever it can to stay ahead of the Big Ten’s expansion plans. There has been some discussion around the conference pushing to get Oklahoma and Texas in the fold as soon as 2023 to leapfrog the Big Ten’s addition of USC and UCLA. The SEC does not want to let the Big Ten creep into the southeast TV markets and will do everything in its power to stop that from becoming reality.

While the SEC would represent more regional matchups for Florida State, the Big Ten offers a tradition of excellence that could boost the university’s academic reach.

NoleGameday has been informed that the conference is considering a concession to offer the Seminoles membership despite the fact they’re not an AAU (Association of American Universities) school. This isn’t something that all of the current members of the conference are necessarily privy about.

That note about the Big Ten possibly waiving the AAU provision for Florida State is quite interesting. That’s not an enshrined requirement (indeed, Nebraska was no longer an AAU member by the time they joined the Big Ten in 2011, although they were before that), but the conference has shown a strong preference for schools that meet that criteria, and ESPN’s Adam Rittenberg reported last summer that they were only interested in adding AAU schools (apart from Notre Dame, which is an exception in  many categories).

All four remaining Pac-12 schools the conference has been heavily linked to (Washington, Oregon, Cal, and Stanford) meet that AAU criteria. But Florida State is a notable potential addition even without that. In football in particular (which is the main sport that matters for media rights, and thus, for conference realignment), the Seminoles have 18 conference titles and three claimed national titles (1993, 1999, 2013).

Beyond that, they’d give the Big Ten a presence in an entirely new area of the country. That’s important for the Big Ten Network and its subscriber numbers and per-subscriber fees (which was a key part of the USC and UCLA additions). So the idea of Florida State to the Big Ten certainly can’t be written off. And, on the network side, getting another school in the Eastern Time Zone would be a significant boon to Fox and their Big Noon Saturday-focused strategy, and it would also be an important blow to strengthen Fox’s CFB portfolio and weaken competitor ESPN’s.

The idea of the Seminoles to the SEC maybe makes even more sense, though. The SEC has been quieter on the expansion rumblings front than the Big Ten, and their last actual move there was adding Texas and Oklahoma (by 2025, possibly sooner) last summer. But a further expansion for them maybe makes more sense now the Big Ten, their only real rival in TV contracts and per-school distributions, has both expanded and passed the SEC in media rights revenues (although how much more the SEC will get post-Texas and Oklahoma additions is not yet clear). And Florida State fits for them in footprint, in rivalries (particularly with SEC member Florida, but the Noles have notable history with several other conference schools), and in football focus.

The SEC is likely to only be interested in schools that would at least maintain their per-school distribution numbers, estimated at around $67 million annually. But FSU would seem to meet that. And another potential factor with a move to the SEC versus the Big Ten is that the SEC, like the ACC, has its media rights entirely with ESPN (beginning in 2024-25). So while there would still likely need to be payouts to the remaining ACC schools, ESPN might even help chip in there if they determine that having FSU in the SEC is more advantageous to them. (However, there also could be some reluctance on ESPN’s part around this move, as weakening the ACC doesn’t seem great for them given their long-term rights deal and conference network there.)

At any rate, McCullough’s comments here should be taken in context. These were at a local chamber of commerce conference, so the audience is presumably Seminoles’ boosters and potential boosters. And it makes sense that the school president would at least indicate to that crowd that he and his team are on top of the realignment situation. But even with that said, the “very aggressive” and “getting a lot of help”  remarks are well beyond what we often hear in these situations. So Florida State will certainly be a school to keep an eye on in any further realignment talks.