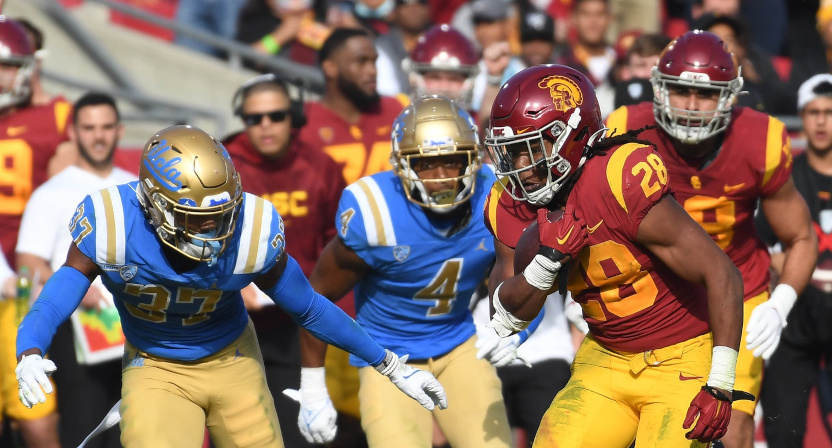 The sudden news Thursday that USC and UCLA are set to go from the Pac-12 to the Big Ten ahead of the 2024-25 season is going to have a huge number of impacts on the sports media world. While the ultimate end of this round of the game of conference realignment musical chairs isn’t known yet (we could still see further additions for the Big Ten, further losses for the Pac-12, further additions for the Pac-12, and/or effects on other conferences), the moves of the Trojans and Bruins (seen above playing each other in November 2021) alone are massive. Some of the biggest impacts there will be for the primary media deals of the Big Ten (coming for the 2023-24 season, partly with Fox, partly TBA) and Pac-12 (coming for the 2024-25 season, if the conference still exists by then, completely TBA). But there are also going to be significant changes for the conference networks involved, and with the Big Ten Network in particular, we have enough data to estimate at least part of what that might look like.

This particular portion of the conference realignment discussion has a lot of similarities to 2010-14 realignment, which had a lot to do with conference (and even school) networks. The television landscape has changed enormously since then, especially when it comes to cord-cutting and to direct-to-consumer streaming services, and the conference networks may be a smaller factor in this realignment than they once were. But they still matter. And in the case of the Big Ten Network, there are direct financial impacts for Fox (which increased its stake from 49 percent to 61 percent last year for an estimated $100 million) and the conference (which owns the other 39 percent). One illustration of one potential impact comes from something ESPN/SEC Network analyst Cole Cubelic tweeted Friday:

The specific numbers Cubelic references bear some scrutiny, which we’ll get to. And any per-subscriber numbers may be subject to change, as with only the Big Ten’s primary media deal done so far, it’s unclear just what content BTN will retain in the next wave. But it does seem highly probably that BTN will see a significant boost to per-subscriber fees in at least the Los Angeles region from these additions, and potentially will see a boost for all of Southern California or all of California as well.

And we do know the general numbers for BTN. Earlier this year, Jon Wilner of The (San Jose) Mercury News wrote that BTN had an estimated 50 million subscribers and an estimated per-subscriber fee of $0.59 per month, as per S&P Global. That would be $29.5 million in per-subscriber-fee revenue alone each month ($364 million annually), before any revenue from ads on programming.

So BTN gains not from just adding more subscribers, but particularly from adding in-footprint subscribers. That was the key part of their much-maligned additions of Rutgers and Maryland, with the former in particular helping them get in-market status for all of New York State with Time Warner and Cablevision in 2014. That alone netted them a conservative estimate of $48 million per year. And that’s key to their adding USC and UCLA, teams that play in the second-largest designated media market in the U.S. (as per Nielsen’s 2021-22 DMA rankings, the LA DMA’s estimated 5,735,230 TV homes was second only to NYC’s 7,452,620).

BTN will not get all of those homes, but we can get an idea how many they might get. The Nielsen TV universe for 2021-22 is an estimated 122.4 million homes. Nielsen’s multichannel video (cable, satellite, or virtual MVPD) estimate in January was 82.4 million homes. That January report estimated 54.3 million homes for BTN. So a way to calculate a conservative UCLA-USC impact for LA is as follows: keep the in-footprint and out-of-footprint fee estimates at $1 and $0.39, assume that BTN will receive a similar percentage of penetration in LA as it does nationally (54.3/122.4=42.7 percent), and assume that that 42.7 percent all already had BTN at the out-of-market price (so going from $0.39 to $1). That gives 42.7 percent home penetration * 5.73 million homes = 2.45 million homes, which multiplied by $0.61 is $1.49 million extra per month, or $17.9 million extra per year.

And the real number from the impact may well be higher. BTN is a more attractive carry (and may wind up on a more accessible tier) in Los Angeles with local teams in the conference than the preceding situation where its closest team was Nebraska, so its penetration in LA may wind up above its national average. Some of those subscribers also will likely come in from not having BTN at all, so the boost for them would be $1 per month rather than $0.61. And the eventual fee may wind up above $1. Los Angeles will have two local teams on the network under this plan, so there’s a possibility the per-sub fee there may wind up even higher. And this is also before any consideration of California markets outside Los Angeles, and some of them could certainly wind up as in-footprint BTN as well. (If New York can count as “in-footprint” thanks to New Jersey’s Rutgers, there will certainly be arguments to count at least wide swathes of California, if not the entire state.)

Unlike the 2010-14 realignment, it doesn’t seem like conference networks are the largest driving factor these days. The wider, top-tier media rights deals with the likes of Fox, ABC, and ESPN are considerably bigger. But the conference networks matter too, at least in the case of BTN. (The Pac-12 Networks, on the other hand, may have been doomed in their current form even before the exit of USC and UCLA.) Getting in-footprint status in at least the Los Angeles market and potentially beyond is a big deal. And it’s likely to lead to a big payday for BTN owners Fox and the conference.