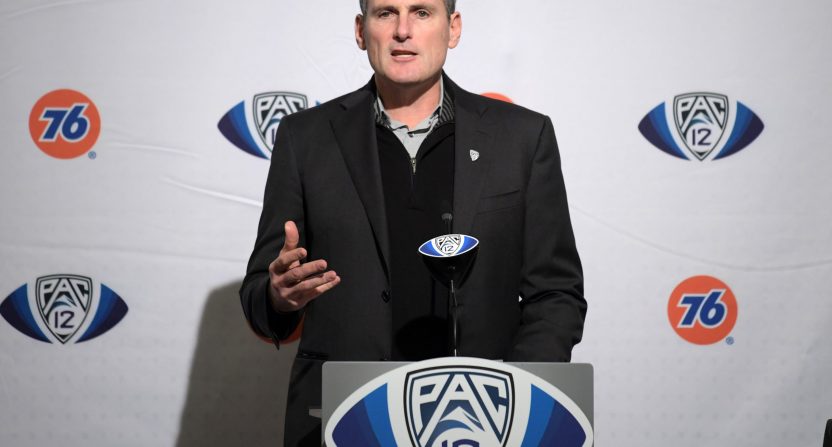 We have less than a month before Larry Scott’s tumultuous (to put it mildly) tenure as the Pac-12 Commissioner comes to an end, with former MGM executive George Kliavkoff replacing him.

Scott conducted an exit interview with the New York Times that was posted on Monday, and while many of the answers are the typical optimistic ones you’d expect, none was rosier than his response to a statement about the Pac-12 Network. It devolved into a comment about the conference’s current rights deal, and its upcoming rights deal.

You’ve taken hits regarding the Pac-12 Network, and a lot of people say it hasn’t met expectations.

I’m very bullish on the value of college sports right, in general, but the Pac-12’s in particular because the conference is in the position of owning its rights. The value of premium college sports continues to increase, and I think it’s validated the initial strategy. The challenges, of course, have been that while we had the biggest TV contract in college sports in 2012, other conferences have since had a chance to redo their deals. Our time is coming in 2024, and I’m highly confident the conference is going to see a massive increase in its TV rights.

I don’t doubt that the conference will get some sort of increase, but I also think a lot of that deal will be dependent on what happens with other conferences, most notably the Big Ten. The conference’s pricy rights deals with ESPN and Fox expire in the summer of 2023, and it seems logical for both to pursue renewing – at a premium, of course. The Big 12, which also has deals with ESPN and Fox, also will likely be a priority for those networks, and their rights deals expire in 2024, same as the Pac-12.

However, the Pac-12 could have an opportunity in the form of CBS. Following their loss of the SEC’s rights to ESPN following the 2023-24 season (hey, there’s that same year again), CBS could be in a position to add rights to another conference, be it the Pac-12, Big 12, or Big Ten. It doesn’t seem likely, or even financially feasible, for ESPN to retain the rights to all three of those conferences, along with their exclusive SEC and ACC deals. That may open the door for CBS, and the (admittedly theoretical) competition for those three conferences between three networks could end up benefitting all three – even the Pac-12.

Scott also briefly discussed the Pac-12 Network, and opined that maybe the conference should have taken a shorter term deal.

Have you had doubts about the network, seeing the numbers as they’ve been over the years?

For those who were involved at the time, they realized it was a long-term strategy and owning and controlling the rights was the right move despite challenges in distribution with a network when you haven’t granted your rights to a partner. In hindsight, I think we could have taken less money and would have had a less impressive deal in 2012 if we had kept our deal shorter and had a chance to reset sooner. I probably didn’t fully appreciate the short-term pressures our campuses would feel when another league redid a deal.

I know we (and many other outlets) use Scott and the Pac-12 Network as a punching bag, but in all fairness, the sports media landscape has vastly changed in the decade since the Pac-12 signed their TV deal. FS1, the SEC Network, and the ACC Network all didn’t exist, let alone ESPN+ or Paramount+. Cable carriage hadn’t started to plummet. The BCS was still a thing, and the College Football Playoff hadn’t started yet.

Scott and the conference chose long-term stability and security over short-term flexibility, which is an understandable choice. However, when you make the wrong decision, as it seems like the Pac-12 did with this TV deal, you’ve gotta own it and deal with the consequences. Only time will tell if the conference will be in a better place three years from now, or if it will have somehow fallen either further down the totem pole.