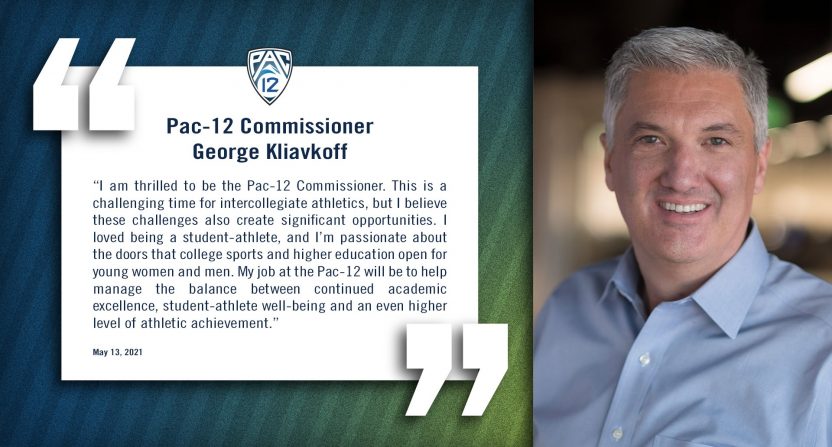 Never doubt the Pac-12’s ability to reach a fork in the road and take a hard turn away from any conventional direction.

On Wednesday night, news began to circulate that the conference would announce the successor to commissioner Larry Scott on Thursday.

Thursday morning, Jon Wilner of the Mercury News began to tease the announcement as a massive surprise.

Source: There is a 99% percent that nobody in college sports has ever heard of the next #Pac12 commissioner.

I have figured out the ID of the next #Pac12 commissioner but am so shocked that quadruple confirmation is required to make sure I'm not being set up.

Sure enough, that surprise was thoroughly met when Ralph D. Russo of the Associated Press reported that the conference’s next commissioner would be someone not in the conference’s bubble: MGM executive George Kliavkoff, which Wilner also reported.

So, just who in the hell is George Kliavkoff?

He currently serves as the President of Entertainment & Sports at MGM Resorts. That doesn’t exactly scream “future college commissioner,” but Kliavkoff does have a background in both sports and media. Prior to his role at MGM, Kliavkoff worked for MLBAM as the EVP of business, and was also a co-president at Hearst and the chief digital officer at NBC Universal.

Clearly, that background is what drove the Pac-12 to bring Kliavkoff into the fold. As you may or may not know, the Pac-12 Networks have been something of a disaster for the conference, and the conference needs to come up with some sort of plan to make them viable going forward. The conference’s TV rights deals with ESPN and Fox are also ending in the summer of 2024, and getting the conference a suitable fee to put it in the same stratosphere as the other Power 5 conferences will be paramount. Kilavkoff’s history in the industry could help there.

However, should we be all that surprised? Back in January, rumors began to circulate that the Pac-12 was looking at TV executives to replace Scott as commissioner. Kliavkoff was not publicly mentioned around that time, but he does fit the overall mold – even if he wasn’t hired from a network by the conference.

I have no idea if Kliavkoff is going to be a good hire, a bad hire, or somewhere in the middle. But he comes from quite a different background than Scott (who served as CEO of the Women’s Tennis Association prior to his hire as commissioner), and after a dozen years under his leadership, the conference clearly needed a new direction. Whether or not this new direction is the *correct* decision remains to be seen, however.