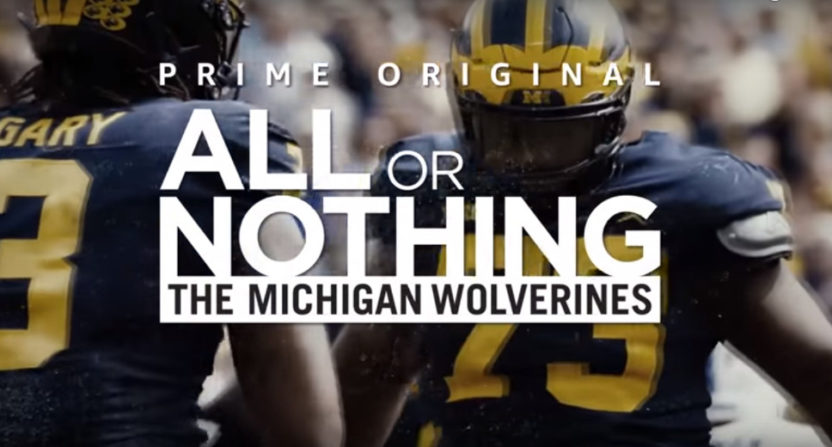 The long-anticipated behind-the-scenes Amazon documentary on Michigan football’s 2017 season, first announced in September 2017 with a January 2018 release date, is almost upon us. The documentary is a partnership between Michigan (making a nice $2.25 million for their participation), Amazon, the Big Ten Network and the Montag group, and a trailer was released for it this week, along with an announcement that it will premiere on Amazon’s Prime streaming service April 6, be part of their All or Nothing series, and be narrated by Mark Harmon (the NCIS star who also happens to be a former UCLA quarterback).

Here’s the two-minute trailer, which features a whole lot of Jim Harbaugh motivational speeches, plus looks at the program’s offseason trip to Italy, a few behind-the-scenes looks at Harbaugh’s family life and the lives of some of his players, and some game footage as well:

It’s interesting that All or Nothing, which started as Amazon’s NFL series following the Arizona Cardinals and St. Louis Rams, is expanding into a more all-purpose documentary brand. They already have another NFL installment coming that focuses on the Dallas Cowboys, and it now appears that their previously-announced series on Manchester City and the New Zealand All Blacks will bear that brand as well.

That makes some sense, as All Or Nothing won a Sports Emmy for its Cardinals season and has gained a lot of attention so far, and branding can be very helpful for sports documentaries. (See what happened when ESPN tried to go from 30 for 30 to ESPN Films Presents after that initial run; the DVR issue obviously doesn’t pop up for a streaming service, but it’s still easier to sell people on “another installment of that thing you watched!” rather than “different name, but we promise it’s similar!”)

However, it should be noted that the main connection to the NFL ones is “being aired on Amazon”: those have been produced by NFL Films, which has no involvement in the Michigan series.

It’s also worth contemplating what’s led to the delay from the initially announced January premiere date, and what that may mean for interest in this series. There’s some speculation out there that this might be thanks to Michigan’s own involvement; the university and its athletics department have reportedly been pretty hands-on in a lot of media partnerships, including with The Players’ Tribune. And while the shown NFL teams certainly had some involvement in the end product too, it may have helped that those series were done by NFL Films, an outlet that already had a lot of trust from NFL teams.

Fellow league entity BTN probably has some of that as well, but it is newer on the scene and doesn’t necessarily have the documentary reputation that NFL Films does. And Michigan is famously concerned about its brand, so maybe that’s part of the hold-up here.

It may also be that production just took longer than expected or that those involved thought April might wind up being a better release date. And that’s certainly possible too; January’s bowls and playoff games mark the end of college football’s season, and while having that fresh in mind might spark some to check out a documentary, the lag period until April might prove even better, especially for enticing in neutral fans.

There are a lot of college football fans who haven’t had much actual CFB content for a few months, and this series (if well done) could prove a nice alternative to signing reports and spring game coverage. More Harbaugh speeches, in particular, might be a selling point, and it looks like the series will have plenty of those. At any rate, we’ll see how it all turns out, but this is certainly worth keeping an eye on, especially as All Or Nothing‘s first venture beyond NFL Films and the NFL.