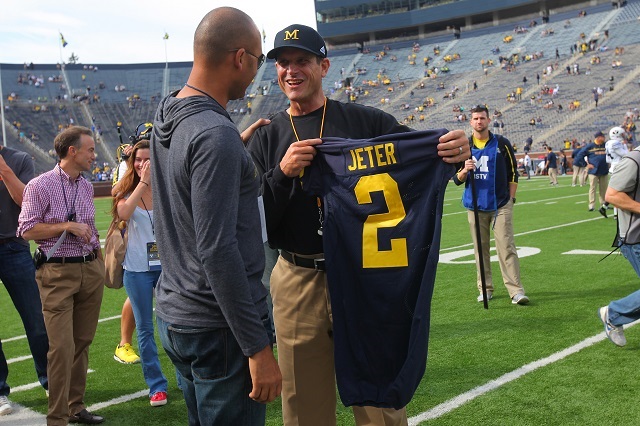 Plenty of media companies invest heavily in covering Wednesday’s National Signing Day, but one has developed an exclusive relationship with and provided a remarkable level of control to a school. That would be The Players’ Tribune, which has found plenty of success in general with stories across a wide variety of sports. On Wednesday, they’ll be particularly focused on the University of Michigan, live-streaming the Wolverines’ invite-only signing day ceremony at the 3,500-seat Hill Auditorium, with featured celebrities expected to include Tom Brady, Ric Flair and Players’ Tribune founder Derek Jeter. There’s even a countdown clock on the Players’ Tribune website and the event is sponsored by Carhartt and Delta. Here’s MLive’s Brendan Quinn on what we’re going to see Wednesday:

Wednesday’s live stream of Michigan’s celebrity-laden signing day will be wholly and entirely unprecedented. From Tom Brady to Ric Flair, a gamut of celebrities is expected to attend, including Jeter. Held at U-M’s 3,500-seat Hill Auditorium, the event is invite-only and no one is particularly sure what to expect.

The goal: “(Signing Day) is one of those things that has almost been tapped-out as far as originality goes,” said Kurt Svoboda, Michigan’s associate athletic director at for external communications and public relations. “So this was, let’s blow it up and let’s think about something totally different. So TPT came onboard.”

As a result, The Players’ Tribune, at its own cost, will have full production control of the live stream for Wednesday’s spectacle. The event will be the largest and most noteworthy moment in the partnership between the outlet and the Michigan athletic department — the only one like it in the country.

Okay, but you have to think plenty of media outlets would jump at the chance to have full control over a school’s Signing Day broadcast, and plenty of schools would leap at the opportunity for further media exposure. By itself, this would be a step forward, but not necessarily a revolutionary one. However, what’s really remarkable here is the larger relationship between TPT and the university, which came out of a deal Jeter orchestrated with the athletic department that was announced in October. Jeter didn’t attend Michigan, but signed a scholarship offer to play baseball there before the Yankees drafted him, and said at the time that “My heart has been there ever since.”

That partnership has led to plenty of content, including TPT pieces from Michigan athletes like Jake Rudock and Jabrill Peppers, plus one this week from head football coach Jim Harbaugh. What’s particularly unusual here, though, is that final approval of these pieces rests not with the media outlet (as is standard in the media industry) or with the subject/”author” (these are written in first-person voice, but are generally penned by TPT staffers based on interviews with the subjects), but with Michigan’s sports information director. That makes these equivalent to a press release, but written in a style that will attract those who don’t care about press releases, and that creates a very natural partnership for both the outlet and the school:

As for The Players’ Tribune, Michigan is one of the largest, most visible programs in the billion-dollar gorilla that is collegiate athletics. The affiliation is a no-brainer.

“We will of course be looking into other colleges, but Michigan was the most obvious place to start,” said Michelle Isaacs, a TPT spokesperson, in an email.

As of now, U-M is the only school associated with The Players’ Tribune. No money is trading hands in the current non-contractual arrangement between the two. U-M is not profiting off the content it produces.

According to Svoboda, student-athletes are free to decide when to write and what to say. He says he the opportunity “empowers student-athletes to do their own thing.” At the same time, editors from TPT, some of whom came onboard from ESPN The Magazine, nicely varnish all content. The final product is approved by Michigan’s sports information office.

Since the partnership was approved by interim Michigan athletic director Jim Hackett and announced in October 2015, content has been controversy-free and mostly pulled through the keyhole of Michigan’s worldview. Some might read it as biography. Other might read it as hagiography. Either way, fans consume it.

That’s really the key point here, and it speaks to the larger success of The Players’ Tribune. The site unquestionably creates plenty of interesting, readable content from the stories of athletes, content that in another age would be in traditional newspapers or magazines. Players’ (and institutions’, as in the case of the U of M) desire to control the story is a big part of why TPT’s getting these stories, and it’s understandable why players and schools would want to give their content to such an outlet; with final approval, they’re guaranteed that it will make them look good. Content designed to make you look good was traditionally restricted to press releases, but it’s worth noting that that line has blurred substantially over the years; many teams now employ talented journalists to write news and opinion pieces for their websites, which aren’t necessarily all that different from the stories run in the actual news outlets covering the team. As long as the fans are willing to keep reading despite the content’s source, this approach works.

The challenge is that schools’ and teams’ specific websites only have a limited reach, though, and that’s what Michigan’s Svoboda recognizes. Plenty of schools stream their Signing Day ceremonies on their own websites; what makes Michigan’s different is that it’s being done by an independent outlet. The Players’ Tribune has just enough independence (plus a substantial quality of craft) to make its work feel like media coverage rather than press releases (and thus, more appealing to readers who are bored of press releases), even if the final approval lies is an area more traditionally restricted to PR.

Svoboda is right when he says “The people who go to mgoblue.com every day — they’re in the choir, they go to church. We’re reaching a new audience.” The Players’ Tribune unquestionably has a larger audience than Michigan’s normal PR channels. The big question is if those reached by the wider channels of TPT are going to embrace this content, or if they’re going to see it as just an extension of Michigan’s PR.