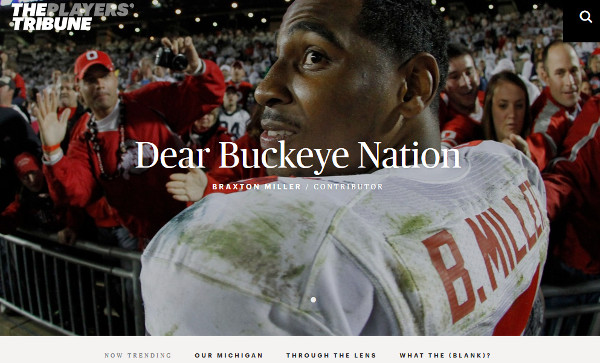 Derek Jeter’s “The Players’ Tribune” has become a remarkable success on several levels, attracting millions in investment from both outside venture capital firms and athletes, drawing site-crashing traffic, and even looking to start a restaurant chain. Sports Business Journal‘s Liz Mullen has an excellent feature on the site, where it’s come from, and where it’s going (including a plan to potentially take it public in a few years), but what really stands out are the comments from editorial director Gary Hoenig (a veteran of ESPN The Magazine,  The New York Times, Newsweek, and The Washington Star) on why so many athletes are opening up to TPT:

“What I thought would be really hard was to get athletes to trust us and really get them to tell their stories, and that turned out to be a lot easier than I thought,” he said.

That trust, he says — echoed by others at The Players’ Tribune — has a lot to do with the state of the traditional sports media environment.

“It’s been a long, slow slide, and I think it’s reflective of the difficulties we have in the journalism business making money right now.”

Despite that, both Hoenig and President Jaymee Messler repeatedly made the point in long interviews that The Players’ Tribune is not trying to replace or compete with traditional sports media.

“Because of where the landscape is with the media, there is more of a need for The Players’ Tribune,” Messler said. “There is a place for both.”

It’s understandable why so many athletes are choosing to tell their stories to TPT rather than conventional media outlets. In addition to that aforementioned toxic relationship with the media (which has gotten worse in the last few years), they have a much higher level of control if they choose to work with TPT. While most of the articles are written by uncredited TPT staffers rather than the players themselves (there are exceptions; Mullen’s piece mentions that Steve Nash wrote his retirement letter himself), those articles are constructed by transcribing the players’ comments, and players have substantial control over the final piece. Athletes often find that valuable, especially when it comes to sensitive issues:

In outlining the editorial process, Hoenig said the stories usually involve a long interview with the athlete by one of the young journalists at TPT. The interview is recorded, transcribed and then organized into a story.

“Nothing gets changes from the athlete’s words other than to make the transitions less awkward or to organize the piece in a more intelligent way,” Hoenig said. “Often the athlete is the most nitpicky about the words he wants to use or what he wants to say. I would say the process is very much in a range of what it is to work with writers.”

Hoenig said TPT editorial staffers spend a lot of time with the athletes before interviewing them.

Swin Cash, a forward with the WNBA’s New York Liberty, has done stories with the site, including a piece where she and fellow WNBA players Tanisha Wright and Essence Carson spoke out on the issues of race, gender and the visibility of female pro athletes. Cash said TPT staffers met with her and the other players before the pieces and made players feel at ease by talking to them about what they wanted to say and convincing them they could say it in their own words.

“That is why they get a lot of respect from the athletes they work with — because it is a collaboration and not just from the reporter’s viewpoint,” Cash said.

Cash said she would not have done the piece on race and gender with Wright and Carson with any other media outlet. “A lot of times when a situation is touchy with athletes, it’s hard to speak on a subject, because it can get pushed the wrong way,” Cash said. “And you can get a lot of backlash. So athletes stay away from it.”

That’s a long way from many conventional media outlets, as can be seen from the blowback Rolling Stone received for offering El Chapo a chance (which he didn’t take) to approve Sean Penn’s interview pre-publication. The standard at many media outlets has long been that interview subjects can’t see anything before it’s published and don’t have any control over how a story comes together, which comes down to essentially “Trust us.” That makes sense from a journalism standpoint, but in an era where athletes often distrust media (and with good reason at times; there are plenty of media stories that make them look bad), it makes sense that many of them would choose to trust Jeter and TPT instead. Beyond even the involvement of Jeter and other big-name athletes, athletes who talk to TPT have substantial control over how their words will appear, which is more than they usually get from conventional media.

Athletes relaying their side of the story didn’t start with TPT, and it isn’t limited to TPT. Some literary-minded athletes have chosen to write their own books (Jim Bouton’s Ball Four, Ken Dryden’s The Game and R.A. Dickey’s Wherever I Wind Up are a few of the numerous examples over the decades), and many others have written first-person books in conjunction with experienced journalists. Some active athletes have written newspaper columns or appeared as television commentators and panelists, too. At the other end of the length spectrum from books, athletes have used a variety of social media platforms to quickly present their take on a story.

Where TPT stands out for athletes, though, is in how it provides the best of both worlds. TPT allows athletes to present their perspective and gives them control over it, but does so in a professionally-crafted form that they don’t have to assemble themselves, with wide distribution and little promotion required on their end. It has the control of writing without the need to do the work of writing, and the skillful crafting and wide distribution of stories in mainstream media outlets without the loss in control typically required there.  For athletes, that can seem very attractive.

TPT has become such a success, and such a player in the space, that some mainstream outlets are taking some cues from it. A couple examples from the last few years that stand out are the first-person pieces by NBA players Jason Collins and LeBron James in Sports Illustrated: Collins’ announcement that he was gay and James’ announcement that he was coming back to Cleveland. Both were written in a first-person style with the help of experienced journalists (Franz Lidz and Lee Jenkins respectively), and both easily could have appeared on TPT. Expect to see more mainstream outlets doing more of this in order to compete with TPT. It’s notable that there are other new players following TPT’s approach, too; Mullen’s piece mentions that James has his own athlete-video-focused “Uninterrupted” site, and that the NFLPA and Wasserman Media Group each have their own ventures in the space. TPT would seem to have a big edge over new competitors, though, given its staff, funding, and connections.

One of the big questions about TPT going forward is compensation for athlete contributors. Mullen notes that “athlete contributors do not get paid by The Players’ Tribune unless the story in which they are featured is connected to a brand,” so many of these athletes are providing content that’s making money for someone else. Of course, that’s always been the case; athletes’ stories told in the media have always had value that hasn’t gone to them. There may be plenty of value for uncompensated athletes, too; a TPT story can raise their profile and perhaps create other opportunities for them. Moreover, some of these athletes (including Jeter, Kobe Bryant, and others) are investors in TPT, so they’re making themselves money by telling their stories there. Still, if this company gets as big as the venture capital firms invested in it would like it to be, uncompensated athletes may start to wonder why they’re providing content for it.

Perhaps the biggest challenge for TPT will be continuing to provide consistently-compelling content that attracts readers. It certainly will have an edge on big retirement announcements or free-agency decisions, but there are only so many of those. To its credit, TPT has gone well beyond those, providing all sorts of interesting first-person accounts from athletes, and featuring those in smaller sports as well as the big names. However, it does have a tough line to walk; while giving players this kind of control can be extremely beneficial for them, it isn’t always beneficial for readers, and if the pieces start reading more like PR than journalism, the readership numbers may drop. That’s not an issue exclusive to TPT (team websites are largely in the same spot), but it is one they’ll have to keep in mind.

It is worth noting that TPT isn’t going to replace conventional media, either. In fact, its rise may actually convince media to focus more on hard-hitting stories a site like TPT won’t run. We’ll also see how continuous the public appetite for TPT stories is; the site has done very well in its first few years, but it will need to grow much bigger to meet the venture capital investors’ goals. If TPT continues to use its access and standing with athletes to provide compelling, unique content, it may well get there. If it gets too samey or too PR-focused, though, it may be tough to make it as big as the investors would like.