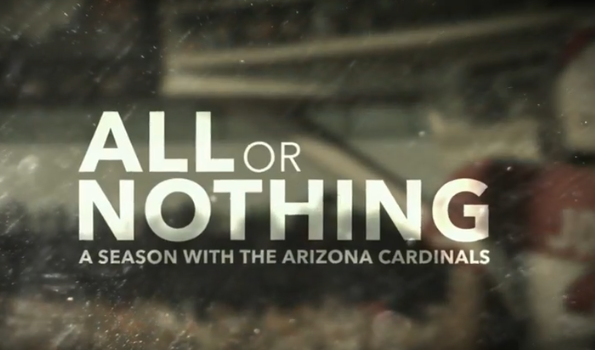 Reviews of the artistic merit and general enjoyability of Amazon’s newly-released All or Nothing: A Season With The Arizona Cardinals video series, produced in conjunction with NFL Films and looking behind the scenes of the Cardinals’ 2015 season, are mixed, with Mike Florio loving it and wishing for more series like this and Will Brinson calling it “Hard Knocks to the next level,” but Will Leitch (the internet’s most famous Cardinals fan!) calling it “surprisingly dull,” “NFL Pravda,” and “less like an invitation to behind-the-scenes intrigue and more like an officially sanctioned, NFL-approved, unusually long Season Wrapup Video.” Regardless of which side you agree with, the series is indisputably attracting some attention, and it’s gaining some viewer momentum, which is really the key to fulfilling Amazon’s main goals here: to attract new users to its video services (and particularly to its Prime memberships, which include streaming video) and to help boost the importance of video to existing Prime subscribers and reinforce its importance as a streaming content service.

Betting on capturing consumers with unique content isn’t exactly new for streaming services, as Netflix, Hulu and others have heavily banked on originals and exclusives to try and stand out from the crowd. Even more traditional networks like CBS and HBO are putting digital only-content out there on their streaming platforms, such as the forthcoming Star Trek series and the After The Thrones recap show respectively, and ESPN is making plays along these lines too. The network has long offered streaming-only (ESPN3) coverage of games from the likes of smaller college conferences, the Canadian Football League and the Arena Football League, and they recently released parts II through V of their acclaimed O.J.: Made In America 30 for 30 documentary on WatchESPN ahead of the televised premieres of those episodes. That move in particular bears a resemblance to what Amazon is doing here, and especially to Amazon’s decision to make All or Nothing available for free to everyone (not just Prime customers) for the month of July, with it only requiring a Prime subscription after that. Like ESPN’s O.J. release, it’s sacrificing some potential direct revenue for the chance to draw attention to the streaming service and change the habits of those who don’t already use it regularly.

O.J.: Made In America and All Or Nothing have a few other things in common that makes them stand out from the growing numbers of streaming-only series; they’re both about sports, and they both have subjects with an exceptionally large potential audience. There’s still strong interest in O.J. Simpson, as shown by both the documentary and the FX drama about him, and the NFL is always huge on the content side (especially if you can do what Hard Knocks has pulled off and get league-wide fans interested, not just fans of the team you’re covering). These are not projects aimed at a small group of hardcore fans; they’re something with a large amount of people who might at least be interested, and that increases their value in promoting the streaming service. (This is why Amazon is getting more into sports in general.)

For Amazon, there’s a dual goal there. One is to get those who don’t have an Amazon account at all or don’t have a Prime account to at least become aware of the video offerings on Prime (which have expanded further with their new deal to exclusively stream most PBS kids’ shows, taking those away from Netflix and Hulu). The other one is to convince current Prime subscribers to explore the video service, not just the free delivery, as that adds substantial value that might persuade them to renew. For ESPN, the immediate goal isn’t as obvious, as WatchESPN is currently only offered with provider authentication, but putting the O.J. series on there first helped to promote awareness of the product and might get some people to check out other games (which would then help the ad revenue from the service). It also might help them build towards an eventual launch of an over-the-top product. Both companies have done something unconventional here, opting to possibly lose out on some direct monetization (TV ratings for the O.J. series, Prime signups for All or Nothing) in favor of exposure , awareness, and a chance to stand out in the crowded streaming marketplace. We’ll see if it works out for them.

[All or Nothing at Amazon]