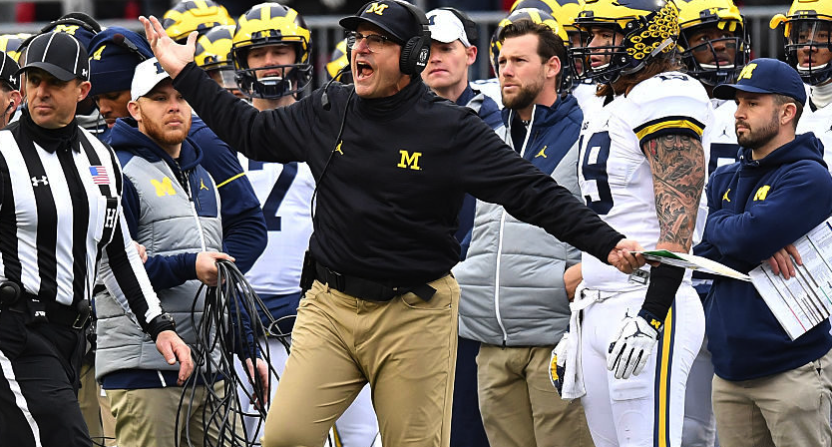 Amazon has found significant success with their Emmy-winning, in-season, behind-the-scenes All Or Nothing series on NFL teams (produced in partnership with NFL Films), and now they’re bringing a similar concept to the NCAA with the University of Michigan Wolverines. Michigan announced Tuesday that they’re currently filming an eight-episode behind-the-scenes series in partnership with Amazon, BTN and the Montag Group (led by famed agent Sandy Montag, who recently was an executive producer on Showtime’s Perfect In ’76 Indiana basketball documentary), and that it will air on Amazon Prime’s streaming video service in January 2018. Here are more details from their release:

“We are proud to partner with Amazon Prime Video in documenting our University of Michigan student-athletes’ daily experiences and the lifelong lessons learned both on the football field and in the classroom,” said Michigan’s J. Ira and Nicki Harris Family Head Football Coach Jim Harbaugh. “We welcome judgment! We embrace this opportunity to showcase our 2017 University of Michigan football team to a vast audience around the world.”

“We think documenting this season will reveal that our university and football program are unique environments that equip our student-athletes for success in both academics and athletics,” said Warde Manuel, U-M’s Donald R. Shepherd Director of Athletics. “We are excited to work with great partners and to break new ground as the first collegiate program to participate in this digital space.”

The series will chronicle the happenings of the 2017 season with exclusive, behind-the-scenes footage from college football’s winningest program. The cameras will follow Harbaugh, assistant coaches and players throughout the entire season, including access to practice, the university’s academic environment and a look into their lives off the field and in the Ann Arbor community.

“This represents a tremendous opportunity for BTN’s award-winning original programming team to partner with an entity like Amazon, as well as explore alternative distribution models for Big Ten content in the future,” said Michael Calderon, Senior Vice President, Programming and Digital Media, BTN.

It’s definitely interesting to have BTN involved in a product that won’t actually air on BTN (the release notes that this is their first time doing that), and Calderon’s comments about exploring alternative distribution models for the future seem noteworthy too. Maybe this leads to BTN creating more content for Amazon down the road.

At any rate, their BTN Originals group has done some solid work, including The Journey and documentaries like Unbeaten: The Life of Brook Berringer and Tiebreaker. And there’s another big name attached here; the release mentions that “The Montag Group has partnered with Jim Jorden Productions on this project. Jim Jorden is formerly of NFL Films and is a 16-time Emmy Award-winning cinematographer.”

It’s also notable that Michigan’s football program is again exploring a new media partnership; they previously teamed up with The Players’ Tribune for a signing day video special and various pieces “written” by Jim Harbaugh and student athletes (subject to the approval of Michigan’s sports information director). And this extends Amazon’s overall push into sports as well. The behind-the-scenes college football documentary has also previously worked for Showtime, currently on the third series of A Season With, so there seems to be demand for this kind of product.

On one level, it’s curious that the Wolverines are allowing behind-the-scenes access, as this is also the school that created a controversy by refusing to release their roster before the start of the year. Perhaps Harbaugh isn’t concerned about something that won’t air until after the season, or perhaps Michigan will have some significant editorial control here to prevent information they don’t want out there from being included. At any rate, it seems that they found this documentary series acceptable, and it should provide at least a partial glimpse into what goes on with the Wolverines’ football program.

(You have to wonder what Harbaugh’s “We welcome judgement!” comment is about, though. That’s certainly unusual for a press release, but hey, perhaps he also attacks releases with an enthusiasm unknown to mankind.)

This seems like a solid subject choice, too, as Michigan has a significant fanbase in its own right and currently sits at #7 in the AP and coaches’ polls. Their 2017 season should be an interesting one to watch, and there may be some neutral interest given the involvement of Harbaugh and given the Wolverines’ high on-field ranking. And there could be perhaps even more benefits here for Michigan than for the NFL teams that took part in All Or Nothing. Exposure can matter an awful lot in a world where you recruit players rather than draft them. And this will certainly provide the school with plenty of extra exposure.