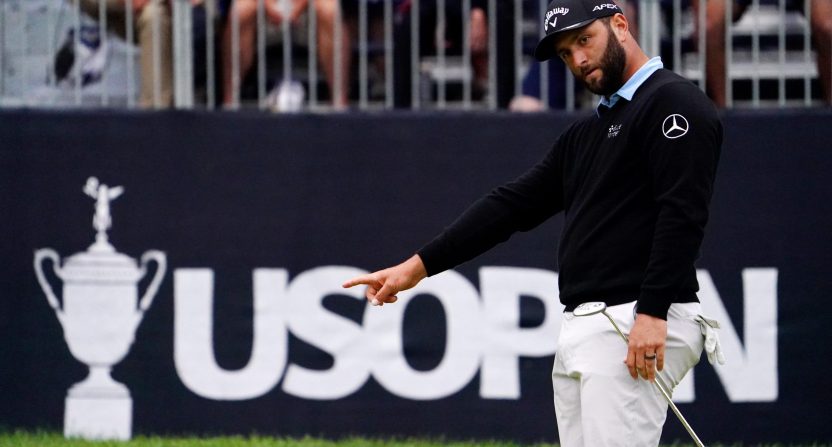 Golf fans have been eagerly anticipating the chance to watch their favorite players from the PGA Tour and LIV Golf tee it up at the 2022 U.S. Open. Their disappointment with the way NBC Sports has covered the event and the perceived overabundance of commercials and non-golf segments seems to have left many of them extremely disappointed.

The storylines at play through three rounds at The Country Club are certainly more than enough to keep viewers glued to the action. From the series of unknown golfers who briefly topped the leaderboard to a hole-in-one to some Phil Mickelson schadenfreude to some spicy moments involving one of the sport’s biggest names, there’s been no shortage of reasons to stick around.

However, the incessant commercials, play throughs, prerecorded segments, channel switcheroos, and confusing broadcasting options have turned the viewing experience into an annoyance for the many of the most passionate fans and followers of the sport.

Sent this out during commercials.

They are back in commercial three minutes later.

Is it me or is there a shit ton of commercials on @NBCSports @usopengolf coverage? Like way more than normal.

In a day that has been one of the largest middle fingers to golf fans in an era filled with them, they just went three shots between commercial breaks in the final hour of coverage.

They're not even a little bit sorry about this.

Based on this last half hour or so of @usopengolf, NBC did not front-load the commercial inventory today. What a sad treatment of our national championship.

NBC: We got you, fam. Here's a whole 45 seconds of golf shots that already happened.

It feels like NBC works really hard to show like no actual golf shots during the U.S. Open coverage.

I mean, there's golf happening, why are we watching a Korn Ferry Tour update?

Why would they show something like this when we could be learning Paul Azinger was born in Massachusetts? https://t.co/pZu90MU5RA

Jimmy Roberts, who is part of NBC’s golf coverage team, responded to one viewer’s negative sentiments about the number of commercials.

C’mon Scott – you know better than that. We are showing everything we can. There are like 10 guys within two shots of the lead. That’s crazy crowded. As for commercials, do you think that’s a choice?

While it’s true that NBC Sports offered more than 45 hours of live championship coverage between Thursday and Sunday, viewers have had to shuffle between Peacock, USA Network, and NBC, and often multiple times a day, in order to watch the action. While that kind of corporate synergy might make some executives happy and could very well be the new normal of sports broadcasting, it’s bugged the hell out of viewers all week long.

If you wanna watch the US Open today a reminder that it requires remote control gymnastics: Peacock, USA, NBC, USA, Peacock.

Related note Law and Order has shown just as many golf shots as Peacock https://t.co/Cq23XDiShT

Sending the final hour back to Peacock is such a spectacular middle finger to golf fans. I almost respect it.

Hard to know what, if any, lessons NBC Sports takes away from all of this. It’ll likely depend much more on what kind of numbers they’re seeing across NBC, USA, and Peacock than on what kind of complaints they see on Twitter. As we’ve seen with Fox and Big Noon football games, fan outrage almost always comes secondary to the ratings numbers.

We’ll see how much U.S. Open golf NBC, USA, and Peacock decide to include in-between their commercials on Sunday.

Update: On Sunday, United States Golf Association (the body that organizes the U.S. Open) CEO Michael Whan commented on this:

I’m on it! We have the best sports production team in the world here with our partner NBC Sports (Olympics, Super Bowl, etc.) and if the amount of interruptions are problematic, we will work with our partner to do better!

More TV people here than the Super Bowl (true!) so we/the USGA will work to free them up to do what they do better than anyone. This has been a great US Open and we will work to make 2023 at LACC even better!