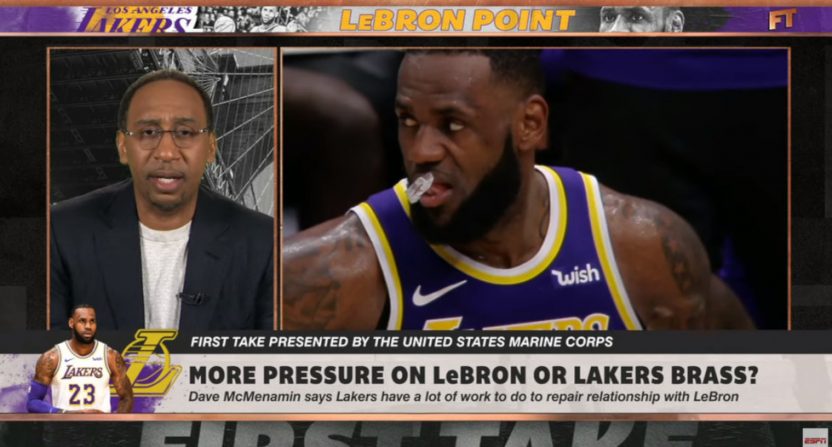 It used to be that pro athletes just had to grin and bear it while talking heads on ESPN and other sports networks talked about their efforts and reported rumors or rumblings behind the scenes. Those days are long gone. Now, an athlete can tell their own story in The Players’ Tribune. They can use documentaries and all-access series to get out their perspective. And, of course, they can take to social media to dispute claims, challenge reporters, and speak directly to their fans.

LeBron James has become a master of this, using all sorts of different media to tell his side of the story and speaking up when he doesn’t feel like he’s being portrayed accurately.

Such was the case on Wednesday when the scroll during ESPN’s First Take read that the “Lakers have a lot of work to do to repair relationship with LeBron.” Turns out, LeBron was watching, and he decided to respond in real time.

That’s James working out in the Lakers weight room where he is clearly not having a strained relationship at the moment.

Of course, to be fair, it could be true that James is enjoying himself and happy to keep chugging along for the Lakers, and also, he’s gonna need to see some results come out of the front office. But, the line in question that set ESPN programming aflame all day on Wednesday wasn’t based on any kind of report but instead on an interview in which Lakers beat reporter Dave McMenamin was simply giving his opinion.

I think it’s very precarious right now. I think the trust that LeBron James has in the Lakers organization has been damaged – maybe irrevocably. I’m not saying it can’t be repaired. But right now, there’s a tough bridge that has fallen that’s going to be need to be put back together. And that’s going to have to be a proving ground for Jeanie Buss, for Rob Pelinka, for Kurt Rambis, for Linda Rambis – whoever else is involved in this process now. And there’s going to be an initial thing proven with whoever is hired as the coach and then this summer.

McMenamin is probably right even if LeBron is smiling right now. The Lakers’ have been a tire fire since acquiring him, all of which came to a head when team president Magic Johnson quit in front of a gaggle of reporters without telling anyone with the team so that he could tweet more. Then they fired Luke Walton (which appears to have been a good move for various reasons) and embarked on a shaky offseason in which they need to right their ship before their superstar decides this isn’t fun anymore.

The problem that ESPN created for themselves here is that, as they do, they took this one soundbite and turned it into fodder for an entire day of programming. “Can the Lakers rebuild the relationship with LeBron?” was a talking point on Get Up and then on First Take.

ESPN probably doesn’t have much of a problem with doing that or with the fallout, which includes annoying LeBron to the point where he felt like he needed to respond. But it also doesn’t seem great to poke LeBron too many times unnecessarily, especially given all of the different avenues he has and relationships he can build elsewhere. It’s one thing to report the facts, which ESPN should absolutely do. It’s another thing to make conjecture sound like a fact, which is where ESPN usually gets into trouble. This was a fairly harmless instance, but it’s a grey area they should heed more often, especially when dealing with a guy they very much want full access to at all times.